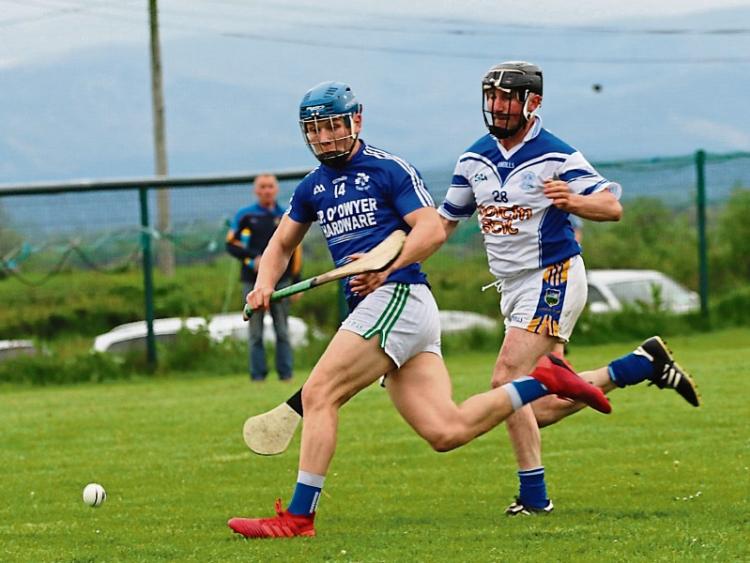 Cian Mooney’s goal three minutes from time secured victory for Eire Og Annacarty Donohill as they inflicted a first defeat of the competition on Cappawhite in this Maria Marron Palmers Hill Stud West Junior B Hurling League encounter. Played in Annacarty, the repeat of last year’s final was keenly contested from start to finish which saw the defending champions Eire Og outscore their opponents 1-3 to 0-1 in the closing eight minutes to take full points.

Cappawhite dominated the early exchanges and lead 0-4 to 0-0 after five minutes of play thanks to points from Fionn Brady, Fraser Allen and Donagh Heffernan.  Eire Og soon settled and two points from Michael Buckley either side of one from Cian Mooney got them into the game. Fionn Brady pointed another free to see Cappawhite ahead 0-6 to 0-3. Josh Quinn was causing problems in the Eire Og full forward line and got off the mark with a point from play but this was quickly cancelled out by Gearoid Lennon at the opposite end. Three points in a row from Michael Breen, Jack Kingston and Josh Quinn had the sides all square early in the second quarter. Fionn Brady continued his good start to the game as he pointed another three frees in quick succession. The tit for tat nature of the game continued for the remainder of the half with Fionn Brady and Fraser Allen on target for Cappawhite while Michael Buckley from placed balls and Cian Mooney kept Eire Og in touch. Cappawhite leading at the break 0-12 to 0-10.

Like the first half the early exchanges belonged to Cappawhite as they opened a four point advantage by the sixth minute. Gearoid Lennon opened the Cappawhite account for the second half but Michael Buckley responded with a pointed free. Paddy Julian and Donagh Heffernan brought the lead out to four points and Cappawhite were going well. With ten minutes gone Cappawhite were reduced to fourteen men but still lead by three points 0-16 to 0-13 as the game entered the final quarter. Michael Buckley and Fraser Allen swapped points from placed balls twice both cancelling each other out. Eire Og would dominate the last eight minutes as their hunger grew. Michael Buckley pointed another free to see the deficit at the minimum. The game craved a goal and Cian Mooney delivered it when he burst through the Cappawhite defence to crash the sliotar to the net. Another Michael Buckley free brought the lead to three points. Try as they may Cappawhite couldn’t break the Eire Og defence to get the goal they required to share the spoils. Eire Og Annacarty Donohill coming out on top 1-18 to 0-18.

Best for Eire Og Annacarty Donohill were Pat Aherne who was always a presence at centre back. Michael Buckley was steady on placed balls. Sean Breen was always dangerous going forward while John Quinn provided a threat until he had to withdraw injured.

Cappawhite were best served by Dean O’Dwyer, the ever hard working Paddy Julian. Fionn Brady was deadly accurate from frees while Gearoid Lennon did well in attack.