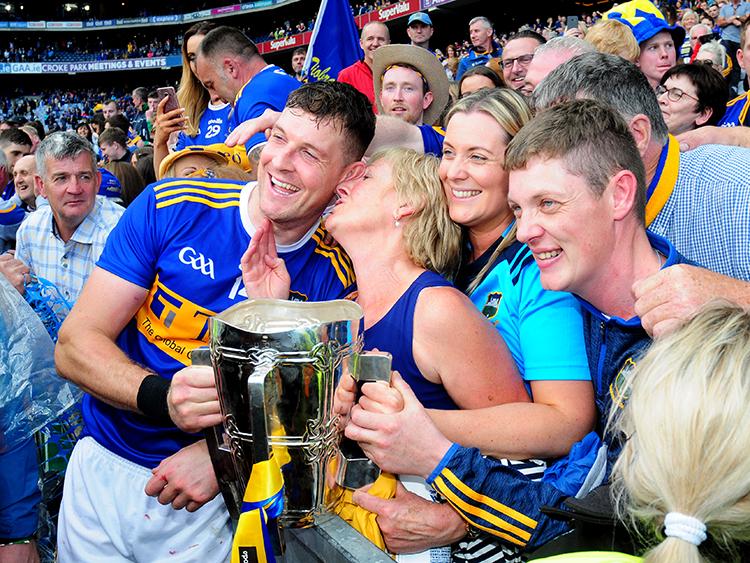 Tipperary’s fourteen-point All-Ireland senior hurling final win over Kilkenny at Croke Park on Sunday sparked a tidal wave of coverage in the national media - here are ten comments that we feel captured the essence of the Premier County’s stunning victory.

Tipp always had the players; they just needed to bring the right attitude. Paudie Maher summed it up best in his TV interview afterwards. He spoke about Tipp just not being at it last year, of how the players just didn’t do enough. Yet there seemed to be a pact made amongst the players once Sheedy returned that they would do everything possible to get back to the level they, and everyone within the county, expect of Tipperary hurling
Anthony Daly (Irish Examiner)

In the ten minutes after half-time Kilkenny’s world wobbled and darkened and got squeezed of air. The over-arching question at the break was what damage the red card would do to them, and it took no more than jig-time to get an answer. Tipperary didn’t so much get a run on them as inhabit them. They invaded Kilkenny’s personal space, insulted the very idea of it
Malachy Clerkin (Irish Times)

Their inability to adjust their style meant that from the moment Richie Hogan walked, this game was only going one way. But here's the thing: people looked at the before-and-after of that red and assumed it was the only reason for Tipp running riot. They outscored Kilkenny 2-17 to 0-10 after Hogan was dismissed but the truth is the tide had turned before that. Without the red card, I think Tipp would have won by seven or eight. With it, that became fourteen
Brendan Cummins (Irish Independent)

Brian Cody mentioned after the game that James wasn’t sure about Richie Hogan’s foul on Cathal Barrett in the 33rd minute. I would disagree. I believe he was taking that long to try and keep Hogan on the field, but when it came to making the big call, the evidence was too convincing
Brian Gavin (Irish Examiner)

History mightn't be kind to them in terms of their arithmetic with the Cats but anyone who has lived through hurling's last, fulminating decade will vouch for the fact that - of all teams - Tipp have challenged Cody's men more ferociously than any other
Vincent Hogan (Irish Independent)

When Tipp got ahead of Kilkenny just after the break they went on to throttle their opponents, bombing over point after point up front and barring the way to goal at the other. With an extra man for the entire second half, they had Mahers aplenty to defend, Noel McGrath to quarterback the attacks, and finishing power aplenty up front
Michael Moynihan (Irish Examiner)

In their imaginations, every Tipperary game ends like this. Score after score dispatched from all angles and distance, every player trying his luck without censure or caution. They drenched Kilkenny the longer the second half went on here and watched them dissolve. In doing so, Tipperary picked up their third All-Ireland of the decade. Let nobody call them underachievers ever again
Malachy Clerkin (Irish Times)

The Cats were unable to pressurise Tipperary as they waltzed out from their half of the field, transitioning ball from defence to attack with little difficulty. The Kilkenny half-back line were under severe pressure as Tipp ruled the middle-third and although Paddy Deegan drove forward on occasion, the final ball failed to put the Tipperary defence in any serious danger
Dónal O'Grady (Irish Examiner)

Just like that, this complicated generation of Tipperary hurlers come shouldering into contention as worthy heirs to the ghosts of the 1950s and 1960s, those tough and brill-creamed forefathers against whom they are constantly compared. Forget Hell’s Kitchen. This gang have transported their followers to Heaven’s Gate. On a strange August day of dark rain and bright passing sunshine, Tipperary touched into their mesmerising free-form hurling against their closest and fiercest rivals and dared anyone not to sit back and be entertained. It finished 3-25 to 0-20. Tipp have won three MacCarthy Cups this decade, in 2010, 2016 and 2019 and came within a disallowed point of claiming a fourth in 2014 in that All-Ireland series for the ages. For all of their crushing disappointments revolving around their failure to successfully defend their titles of 2010 and 2016 and the lingering accusations that they lacked true ambition, the decade now stands as testimony to their consistency. They have beaten Kilkenny in three All-Ireland finals now and the fabled 60s team finished with just one more All-Ireland. The difference is that never had to face Cody’s Kilkenny in their absolute prime
Keith Duggan (Irish Times)

Tipperary won’t give a care and who could blame them? They’re number one, it’s All-Ireland number two for Liam Sheedy and number three for those older players he felt so compelled to return to the sideline to steer to glory. The most one-sided All-Ireland final since 2008, Tipperary’s biggest win over their neighbours since they won the decider by the same margin in 1964, it was coloured by the loss of Richie Hogan to a red card two minutes before the end of regulation-time in the first-half. But was it a deciding factor? Tipperary, after a start almost as shaky as their semi-final performance against Wexford, had settled by the time Hogan departed, so much that they were leading Kilkenny by a point at that stage having been five points in arrears in the 21st minute
John Fogarty (Irish Examiner)