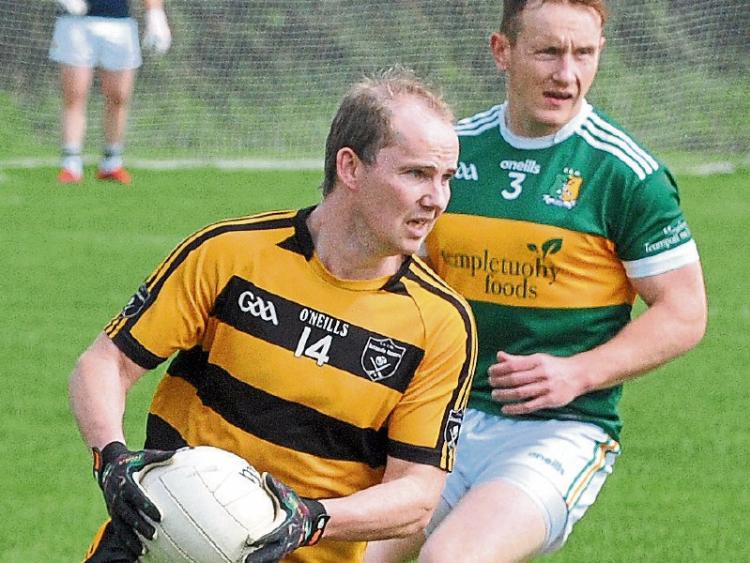 Arravale Rovers  were full value for their hard earned victory over Moyne Templetuohy in the FBD Insurance County SFC clash at Clonoulty on Sunday.

However the  physically stronger Moyne Templetuohy side will certainly rue missed chances from play and placed balls.

Twenty minutes into the first half when Moyne Templetuohy were in the ascendancy, Tomas Gleeson saved a point blank goal shot from Tom Hassett at the expense on an unconverted forty five.

There was more goalkeeping drama at the end of the third quarter when Tomás Gleeson brought down Jason Bergin with the goal at his mercy. Gleeson got the black card, but saved the Rovers from what would be a levelling score.

Moyne Templetuohy opened their account when Tom Meade pointed from the throw in.  Rovers responded with points from James Hogan and Stephen Quinn and when scorer in chief Mikie Ó’Dwyer pounced on Martin Kelly’s short kickout and rattled the net, Rovers led after eight minutes 1.2 to 0.1.

Pearse Meade and Donagh Leahy then traded points but Moyne Templetuohy tagged on three unanswered points from a John Hassett brace of frees and a fine Tom Meade effort.

Cormac Maher and John Hassett  exchanged points to leave Arravale Rovers ahead 1.4 to 0.6.  Rovers tagged on a further three points in the final eight minutes of the half to lead 1.7 to 0.6 at the break.

Moyne  with two early points in the second half from Conor Bowe and John Hassett reduced the deficit to two. Points from Donagh Leahy, James Hogan and Mikie O’Dwyer had the Rovers in front 1.10 to 0.8 ten minutes into the second half.

John Hassett with two and David Lowe reduced the Rovers lead again and after twenty minutes of the half, only a goal separated the sides.

However a late, late push by  Rovers put the game out of reach for Moyne  when James Hogan grabbed a major and Cormac with a point left the final score 2.13 to 0.14

For Arravale Rovers it was certainly an all round team effort. The back sextet soaked up much pressure and held their own against the strong Mid men. Pearse Richardson, Tommy Lowry, Johnny Ryan, Niall Fitzgerald and Darren Lowry did well.

Conal Donovan tried hard in the middle of the park and the late introduction of Brian Jones was significant. Up front Mikie O’Dwyer was excellent, with super sub Cormac Maher also to the fore. Donagh Leahy Led by example with James Hogan and Paddy Dalton also contributing well.