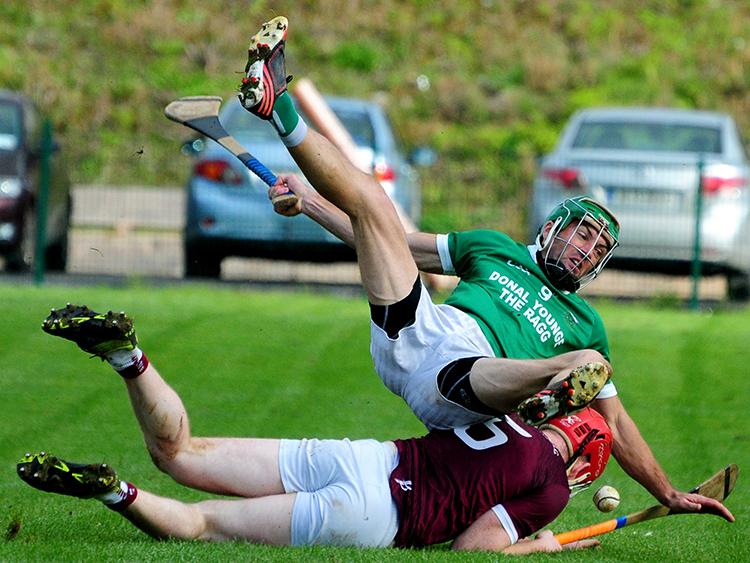 Leading by seven points entering the final quarter Borris-Ileigh hung on despite under intense pressure to see off the challenge of Drom & Inch in a thrilling FBD Insurance County Senior Hurling Championship quarter-final clash at Holycross on Sunday last.

The clash of neighbours attracted a packed house to Holycross and the sides did not let the supporters down with a cracking encounter which was played at championship tempo throughout.

Borris-Ileigh made life difficult for themselves with some poor option taking and some slack shooting while Drom will bemoan taking their foot off the pedal after a promising opening which yielded five points without reply.

Subdued through the second and third quarters Drom came to life in the last quarter as they sought to make up for lost ground and could well have taken the game into extra time.

It was not to be, however, and the victory rests where it belongs.

Borris-Ileigh were the more consistent outfit once they found their feet and their ability to eke out goals was in marked contrast to Drom’s lack of penetration near the posts. And, in this kind of form Borris-Ileigh’s prospects in the championship look extremely good.

With Drom & Inch in full flight at the start it looked as though the Mid champions were on course for an easy win - Séamie Callanan hit four points and Fintan Purcell a fifth while Borris-Ileigh failed to raise a flag during those opening ten minutes.

Brendan Maher was uncharacteristically off target with two Borris-Ileigh frees during that period as the North lads struggled to get into the game, but they got a vital break on twelve minutes when Kieran Maher finished a great Niall Kenny run with morale-boosting goal. That score settled them, though in a very competitive second quarter Drom still held the advantage with David Butler, Tommy Nolan, Johnny Ryan and Séamie Callanan adding to their tally.

Kevin Maher (from frees), Conor Kenny and Jerry Kelly were keeping the flag flying for Borris-Ileigh and in the 29th minute a poorly-directed Drom clearance fell to James Devaney who raced through for a goal that gave his side an interval lead of 2-6 to 0-10.

It was very much anybody’s game facing into the second half, but Borris-Ileigh extended their advantage to four points when out-scoring their opponents by five points to three in a keen third quarter.

Then came the all-important third goal for Borris-Ileigh as James Devaney latched on to Dan McCormack’s clearance and raced through to shake the rigging with a fine effort to give his side a 3-11 to 0-13 lead.

Drom & Inch were in big trouble, but indicative of the spirit in the team they responded to the challenge in the best possible way.

Points by Séamie Callanan and Liam Ryan got them moving and though James Devaney hit the woodwork for Borris-Ileigh with five minutes to play, the Drom & Inch wagon kept rolling forward.

Two further Callanan points from frees left only two in it as the game moved towards injury time.

Drom & Inch won a twenty-meter free and Séamus Callanan sought to pass to a colleague in search of a goal, but the pass was over-hit and Borris-Ileigh scrambled the ball clear. And, that was to be Drom’s final chance.

A win over the neighbours is always sweet in Borris-Ileigh and the bonus here is that it gives them a spot in the county semi-final where they will fancy their chances against any opposition. Their sluggish start did not unduly upset them and while some of their bigger names have had more influential games, the overall package was impressive.

James Devaney’s eye for a goal was crucial to their cause, but Ray McCormack, Jerry Kelly, Séamus Burke and minor free-taker Kevin Maher all played important roles with the experience of Paddy Stapleton, Brendan Maher and Dan McCormack significant when the pressure came on during the latter stages.

Drom & Inch’s failure to maintain their lively start and their lack of thrust in front of goal was their undoing - eight second half wides did not help either.

Things had looked so good for them early on and they will be scratching their heads to discover what went wrong subsequently.

This Drom & Inch team has been on the fringes of the county crown for a number of years and is finding it very hard to achieve the ultimate prize, but with the success of their minors this year the future is indeed bright for them.

Kevin Hassett and David Collins were strong at the heart of the defence with Jamie Moloney also prominent. Further up field Séamus Callanan was the main threat, but the lack of scores from other quarters was not good enough to achieve success at this level.