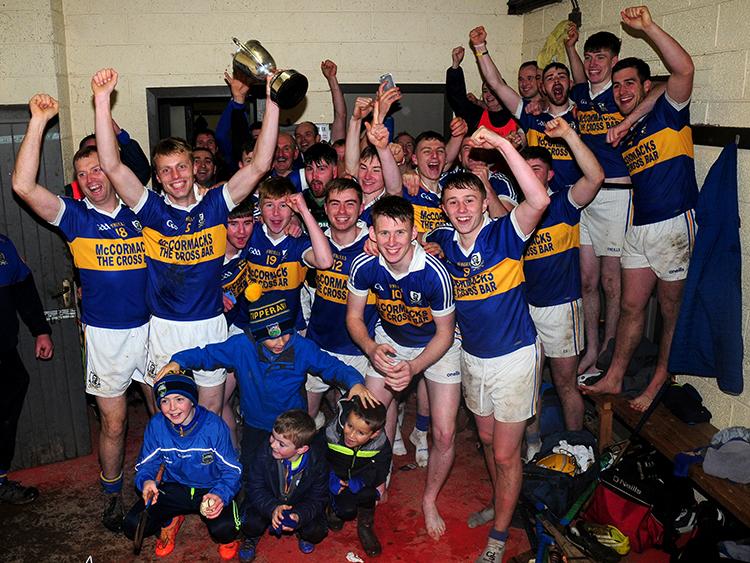 It is crucial to understand the context associated with this contest before you can truly appreciate this Seán Treacy’s display - the Waterford Senior Hurling Championship is populated with twelve teams which makes Ballysaggart the Déise’s 13th best team this season. Meanwhile Seán Treacy’s would rank as the 31st best club team in the Premier County given that the West Tipperary won the intermediate hurling crown while there are a further two grades of senior teams above them (Roinn I populated with sixteen teams and Roinn II populated with fourteen teams).

Seán Treacy’s, however, ignored the circumstances that they found themselves in and absolutely ripped into the Waterford champions; even though Seán Treacy’s ultimately fell short every single person associated with this club should be incredibly proud of these men.

And, the Tipperary intermediate hurling champions could well have won this encounter. Patrick Deegan may well be cursing his misfortune - the midfielder’s last gasp effort at an equaliser in the 64th minute fell agonisingly short - but outside of that incident Seán Treacy’s will truly regret their failure to capitalise on a dominant second quarter.

Ballysaggart led 0-3 to 0-1 with eight minutes on the clock thanks to points from Shane and Stephen Bennett (two frees) while Patrick Carey got Seán Treacy’s off the mark in the fourth - Jody Ryan enjoyed a goal-scoring opportunity and although Darren Meagher recovered just in time to hook the raiding centre-forward Ryan steadied himself and recycled the ball to Carey who flashed over a lovely point.

Two Patrick Carey frees and another from play following a glorious one-handed flick from Matt Feehan tied the game at 0-4 apiece in the 16th minute.

At this juncture Seán Treacy’s were working incredibly hard and managed to knock Ballysaggart out of their stride. A Stephen Bennett free did present the Waterford side with the lead in the 19th minute, but Seán Treacy’s were now the dominant force in this contest. Given their searing effort Seán Treacy’s needed to extract a dividend from this period of dominance, but Patrick Carey steered three awkward frees wide while Darragh Kennedy spurned another opportunity from play.

In first half injury time Stephen Bennett (’65) brought fourteen scoreless minutes to a conclusion for a Ballysaggart side who must have been relieved to retire at the break nursing a two-point lead (0-4 to 0-6).

Seán Treacy’s were held scoreless for the concluding seventeen minutes of the opening half and coughed up a point to Stephen Bennett right from the throw-in at the start of the second.

The Tipperary champions, however, rolled up their sleeves and responded to the challenge posed. Indeed, right from the re-start Patrick Deegan won possession, broke through the Ballysaggart half-back line and created a goal-scoring opportunity for Jody Ryan - the Seán Treacy’s centre-forward demanded an outstanding save from ‘keeper Michael Ryan and Patrick Carey converted the resultant ’65.

Seán Treacy’s were battling hard, but Ballysaggart surged four clear (0-5 to 0-9) thanks to efforts from Ronan Walsh and Stephen Bennett (free) and although Patrick Carey hit back with a free for the Tipp men Shane Bennett landed the point of the game with twenty minutes to play.

Efforts from Jody Ryan and Darragh Kennedy book-ended a cracking effort from Kieran Bennett to leave three between the sides entering the final quarter (0-8 to 0-11) - admittedly Seán Treacy’s may well have been cut adrift in the 44th minute when Matty Meagher had Shane Stapleton’s goal at his mercy, but Donnacha O’Brien did especially well to spoil the substitute’s effort.

A Stephen Bennett free opened a four-point gap soon after before Seán Treacy’s created another terrific goal-scoring opportunity in the 46th minute - Patrick Deegan managed to conjure a stinging shot, but, somehow, Darren Meagher got a half-block on the effort and conceded a ’65 which Patrick Carey drilled over. Carey then converted a placed ball before a second Kieran Bennett point left three between the sides entering the final ten minutes (0-10 to 0-13).

The respective free-takers traded placed balls and with seven minutes to play Seán Treacy’s still trailed by three (0-11 to 0-14). The Tipperary champions, however, battled gamely on with Michael Feehan, Tom Hickey, Seán Hickey, Matt Feehan and Jody Ryan outstanding for the Tipperary champions. Indeed, Ballysaggart appeared to be wobbling and coughed up a ’65 in the second minute of second half injury time. Shane Stapleton lobbed the ball in and following a ferocious goalmouth scramble Ballysaggart scooted down the field to where Shane Bennett belted over the insurance score.

And, that insurance score proved pretty valuable to the home side as Seán Treacy’s plundered a goal right from the re-start - ‘keeper Michael Ryan gathered a delivery from Andy O’Brien, but Seán Ryan expertly dispossessed the Waterford custodian and buried a goal in the 63rd minute.