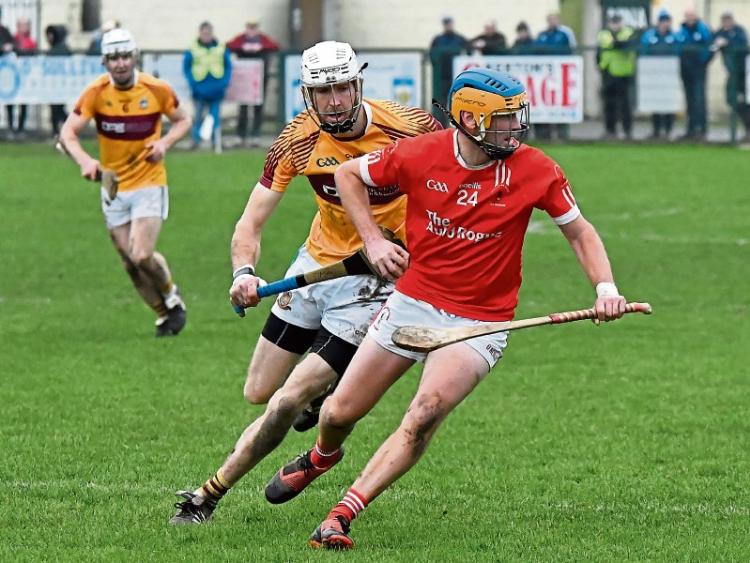 St Mary’s of Touraneena made the short trip into Clonmel Sportsfield today (Saturday) a profitable one when they overcame Tipperary champions Carrick Davins by two points in a thrilling Munster Junior Hurling Championship semi-final.

The Waterford champions just about held on in the end against a courageous battling performance from the Carrick-on-Suir side who had fought back from a seven points deficit after 20 minutes. The goal the Davins so desperately needed eluded them all day, thanks in no small way to some superb goalkeeping by JP Fitzpatrick, especially a brilliant full length dive to save what looked a certain goal from Michael Whelan five minutes from time.

Having captured their first county title in 30 years, and already with a win over the Limerick representatives in this year’s provincial competition, St Mary’s enjoyed much the better of the opening half and this was where the game was won and lost. It was an eight minute spell around the halfway stage of that opening period that the Dan Shanahan coached side scored 1-5 without reply. It pushed them into a 1-6 to 0-2 lead by the 19th minute and gave the Tipperary representatives a mountain to climb that ultimately they failed to overcome. But credit to them they never gave up the fight.

After Eoin Kearns opened the scoring with a free for St Mary’s in the fifth minute the Davins replied with two points, one an excellently executed sideline cut from Michael Whelan and the other a skilful hands-free point from 40 metres by Patrick Harris. At 0-2 to 0-1 after nine minutes, the Davins had edged ahead, but it would be the only time in the game that they would hold that whip hand.

A brilliant piece of skill by Eoin Kearns out on the sideline saw him level matters up from 60 metres after 11 minutes before the game’s only goal arrived a minute later.

A move involving Eoin Kearns and Kevin Sheehan saw a long delivery into the goalmouth and when the ball broke to the side Stephen Coffey gathered well, made space for himself and  drove low past Gerard Robinson to give the Touraneena side a massive boost and the lead.

Anchored by Brendan McGourty at centre-back who was immense all day, the Deise side, adapting to the soft conditions the better and working that little bit harder, tagged on four more points without reply, including two frees from Eoin Kearns and white flags from play from Jason and Kevin Sheehan.

Indeed they looked certain to score a second goal only for a last-ditch full stretch interception by Stephen Cronin denied Mike Kearns as he tried to steer the sliotar home. Had that goal gone in the game would have been over there and then by the 20th minute.

After 24 minutes Adam Foran had the Davins first score since the ninth minute, cancelled almost immediately by an effort from St Mary's midfielder Kevin Sheehan.

But at least as half-time approached the Philip Ivors managed Carrick side were beginning to come more into the game and three further points from play in the dying minutes from Noel Butler, Billy Roche and Michael Whelan gave them inspiration. In between these scores, Eoin Kearns tagged on two more for the Waterford side, one from a free, to send them to the break leading 1-9 to 0-6 and full value for that advantage.

Two weeks ago in the Tipperary county final Davins scored a goal within seconds of the re-start of the second half. They very nearly repeated the feat against St Mary’s when Willie O’Dwyer’s shot was well saved by JP Fitzpatrick after just 10 seconds at the expense of a 65 which Lee Mackey converted.

Three minutes in Conor Whelan pointed on the swivel for Davins but it was nullified a minute later by the hard-working Sean Fitzpatrick to keep the West Waterford side five to the good.

The sticky conditions were making hurling difficult for both sides with scores hard to come by and all well-earned. Davins were showing great improvement on their first half showing and three points without reply, two Patrick Harris frees and a point from Willie O’Dwyer (after Lee Mackey had won a hard ball) had the Davins back to within two points at 0-11 to 1-10 by the 48th minute.

It must be mentioned that the contribution of captain Lee Mackey was immense at centre-back for Davins as time and again he won balls he had no business in winning to drive his side on and on.

Touraneena who scored just one point in the opening 18 minutes of the second half, then had two within a minute, both from the superb Eoin Kearns; this brace, which stemmed the tide for St Mary’s, were to prove invaluable by the end of the hour.

Michael Whelan’s whipped effort off the ground looked destined for the St Mary's net before the Waterford keeper pulled off that brilliant save for a subsequently converted 65. Crucially a battling point from the puck-out by Kevin Sheehan kept the lead out at 0-12 to 1-13 with four minutes of normal time remaining.

The never-say-die drive from the side in red saw further points from Conor and Michael Whelan to leave just two between the sides as the game entered the four additional minutes. With time almost up the Davins were awarded a free from 40 metres but with the final whistle imminent it was all or nothing and Patrick Harris’s lobbed-in effort was batted out and the boys from Sliabh gCua were left to celebrate a deserved victory in the end. 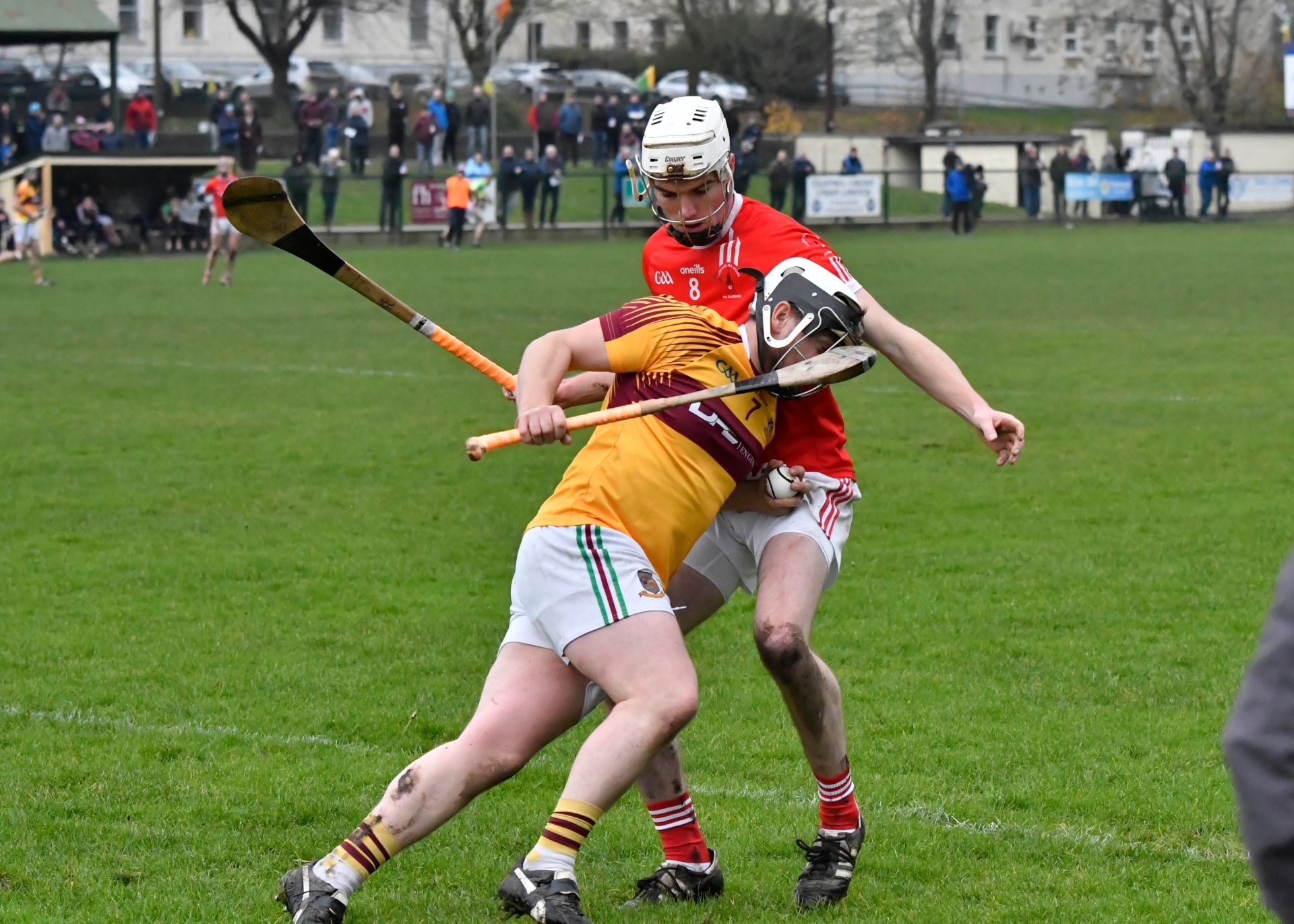 In the final they will now play Cork side Russell Rovers.

For St Mary’s there were many excellent displays over the hour from the likes of Brendan McGourty, Eoin Kearns, Sean Fitzpatrick, Kevin Sheehan  and target man Mike Kearns, not forgetting the heroics of JP Fitzpatrick and the whole defence who stood up manfully against the red tide in the second half.

For the valiant Davins Lee Mackey was outstanding at centre-back. Conor Mackey, Adam Foran, Jamie Houlihan defended well, Billy Roche and Michael Ryan never stopped in the middle all day, while Patrick Harris, Billy Roche and Conor Whelan were the pick up front.

PS: Great credit to the host club Clonmel Commercials/St Mary's for having the venue in great condition despite all the recent heavy rain.

Man arrested following seizure of €10,000 worth of heroin and cash in Co. Tipperary town