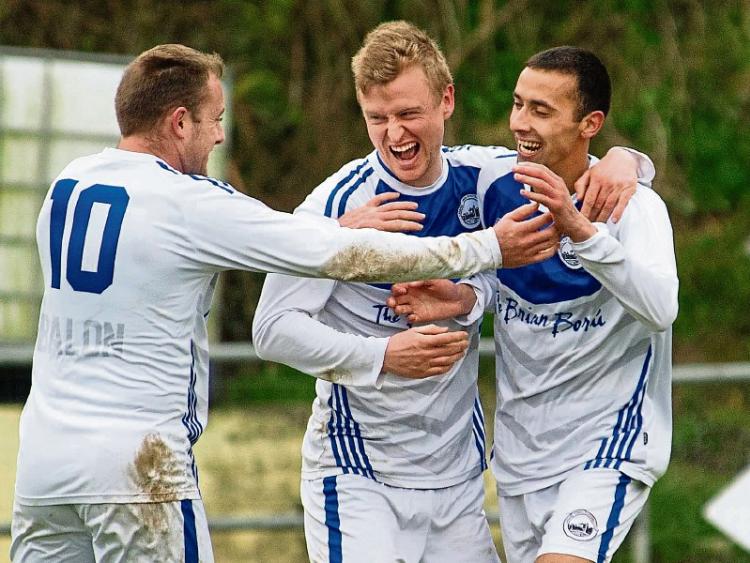 Cashel Town made history and progressed to the last 32 of the FAI Junior for the first time, when they came from behind against a very strong Wexford side in Rosslare Rangers in front of a large crowd on a bitterly cold day at Palmershill in Cashel on Sunday last.

Unusually for a team that has played so well over the past year and a half, the home side started the game very nervously and were not at their fluent best for large parts of the first half. This handed the initiative to the visitors and they took advantage of that when they took the lead in the 14th minute through Gearoid Byrne who pounced on uncertainty in the hosts defence to tap in from close range.

Things then went from bad to worse for the TSDL side when they lost Michael McDermott to injury minutes later. However, his replacement Gavin Browne had a settling effect at the back and steadied up the home side from then until the end of the first half.

Chances were few and far between with the strong wind making the game very difficult, and the half time break was a welcomed by both sides, especially the home team, as they struggled to get back onto the game.

Right from the beginning of the second half Eoin Byrne and James Harding started to cause problems for the Rosslare backline and should have equalised but for some great goalkeeping and poor finishing. They finally took one of their chances just after the hour mark when Sean Cormack broke into the box and bought a great save from the visiting keeper, but he only palmed it out to James Harding was on hand to tap in the rebound.

Cashel were on top now and missed a great chance when Eoin Byrne broke the offside trap but failed to finish ten minutes later. And Byrne was in the thick of it again 13 minutes from time but his diving header was just wide after a great cross from Stevie Coppinger.

With the game looking like it was heading for extra time, Byrne and Harding combined one more time to set up Stevie Coppinger who kept his cool to finish from 12 yards in the final minute.

There was one last act of drama when the visitors thought they had equalised deep into time added on, but their looping shot cleared the crossbar and the home crowd were delirious with delight as their team march on.