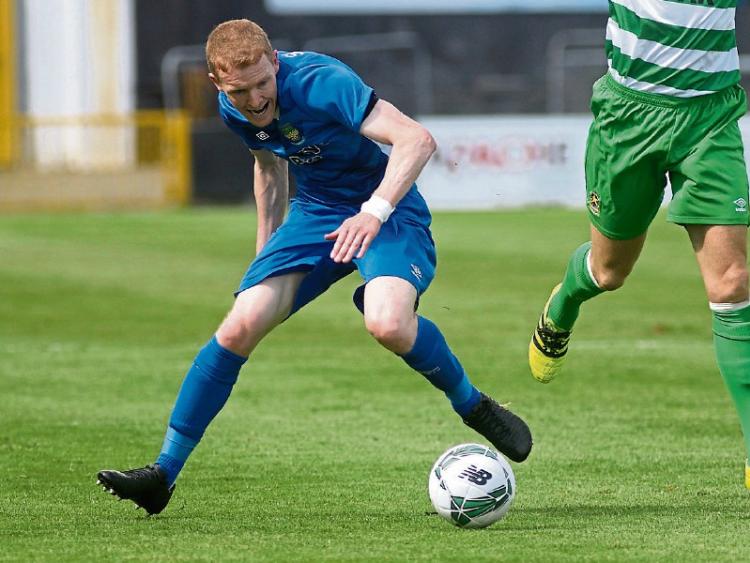 Paul Slattery's second half goal brought St Michael's back level but ultimately it was the Donegal side, Greencastle, who advance after extra-time.

This was always going to be a tough game, with St Michael’s having to travel almost the length of the country to defend their hard won FAI Junior Cup title, but the dream of a back to back pair of triumphs disappeared on Sunday in beautiful Donegal when the TSDL side fell to a wonderful late late goal.

The Saints were left to rue a host of missed chances over the last 15 minutes of the tie, and will feel it was one that they let slip away, but that is the nature of cup football in all its glory.

The home side started brightly and were the better side against a leggy St Michael’s team, but as the legs warmed up the visitors began to see more of the ball and the chances.

David Slattery and Richie Ryan both had half chances, while Greencastle troubled the Saints defence on a number of occasions, especially from set pieces.

When the first goal came however, it wasn’t a setpiece but a brilliant volley from Jamie McCormack who got himself in a perfect position between the two Saints centre halves, and flashed a shot that dipped in below the crossbar to give Aido Walsh no chance in the goal.

The visitors were rocked by this and lacked some of their usual composure and cohesion, and went to the break a goal down and knowing they would have to seriously up their performances in the second half.

But that they did and after a few efforts were back on parity in the 57th minute when Willie Armshaw fired over a deep cross into the Donegal side’s danger area and David Slattery headed home via the underside of the crossbar.

Armshaw was looking constantly dangerous now, and there was a bit of a swagger about Saints play. Russell. Quirke went close on the hour and a Richie Ryan cross just lacked a finish.

Quirke went close again from a Jimmy Carr cross and saw his effort cleared off the line, whilst Carr also had a shot cleared off the line 20 minutes from time. But for all their good work and pressure, St Michael’s were unable to breach the home defence and the game finished level at a goal apiece.

Extra-time was largely uneventful with Greencastle killing the pace of the game. Neither side really looked like taking the game by the scruff of the neck at that point, no doubt with the legs getting heavier by the minute and the pressure of having to take penalties looming large in the minds of the management and players on the pitch.

But it never got to that point, and the unthinkable happened for the holders, after a defensive mix-up allowed Greencastle sub Mark Henry to steal in and shoot to an empty net to make it 2-1 for the home side.

There wasn’t enough time for the Tipperary Town side to respond and Greencastle ran down the clock to record a victory which nobody saw coming such was the visitors reputation and dominance on the day,. But fair play to the hosts they dug in when they were on the back foot and ground out a performance and result that they will celebrate for a long time to come.

This was a huge blow for Saints but they have been pitching at a really high level since 2009 and they have brought huge joy and success to players and supporters alike over that period. They will bounce back and still have four trophies to play for this season. Another day, chances and half chances go in the net.

Greencastle are a part of a resurgence in Inisowen League over the last two years with Glengad and Buncrana Harps also coming to promise on a national stage and the footballing gods smiled down on them Sunday.