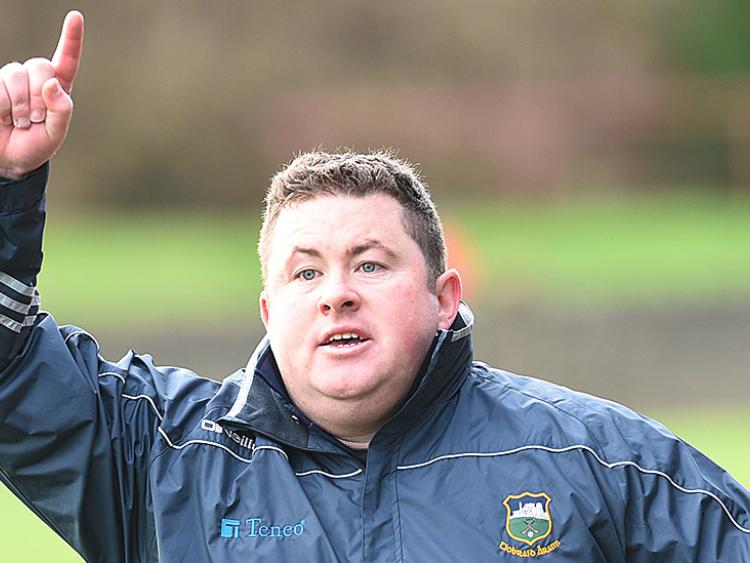 At the fifth time of asking, Rory Gallagher secured his first win as Derry boss with an unconvincing victory over 13-man Tipperary in a dour affair at Celtic Park, Derry on Sunday afternoon.

Following a draw with Down and a win over Louth, this was Tipperary's first reverse of the campaign.

The build-up to the game was dominated by the state of the pitch at the Lone Moor Road venue after it was cut up by Saturday's U20 win for Derry over Fermanagh that went to extra time in the driving rain.

An initial pitch inspection, before nine o'clock on Sunday was followed by a request to Croke Park, who were determined for the game to go ahead, for a second assessment.

The surface was passed playable only 80 minutes before throw-in, following the arrival from Mayo of referee Jerome Henry.

Tipperary manager David Power admitted that his side wanted the game to go ahead, rather than face another trip north, but felt the GAA should have made a call on the game on Friday, with the storms being forecasted.

“The whole scene has to be looked at. This game shouldn't have happened today, it should have been pulled on Friday,” Power stated.

Derry manager Rory Gallagher accepted that, apart from the logistics of a re-fixture, there was an issue surrounding player welfare.

“We were making some queries towards Croke Park but they were quite clear, the games were going ahead,” he said.

“I suppose when Tipp were up and they (GAA) made a decision, you just have to go with it.”

Derry started with Niall Toner ahead of Alex Doherty, who played over 45 minutes of the U20s' win over Fermanagh. The other change from the Down game saw Carlus McWilliams come in for Conor McCluskey, a decision Gallagher confirmed as a tactical one.

Midfielder Steven O'Brien won the throw-in and Tipp had the ball over the bar within the first minute. A free was moved forward for dissent and Conor Sweeney swung over with ease.

The home side replied with a point. Shea Downey began the move in defence, Emmett Bradley took off on a run and was fouled. In absence of a right footed free-taker, Chrissy McKaigue worked he ball short to Niall Toner who slotted over a terrific point.

Derry stuck to their plan of playing Toner up front on his own and they went ahead when Benny Heron was fouled in the process of taking a mark and Shane McGuigan made no mistake from close range.

Shea Downey was harshly blown up for taking too much out of the ball and Sweeney tapped over a second free of the day.

Derry struggled with their kick-outs against the wind but Shane McGuigan, operating mainly at wing-forward, won possession. He was fouled and when McKaigue's long punt into the Tipp defence broke, McGuigan had advanced before pulling on the ball but his half-chance was gathered by Evan Comerford.

Niall Keenan and McKaigue rotated in the sweeper role and it allowed Brendan Rogers to get Derry forward on the left flank.

Heron was adjudged to have touch the ball on the ground and when the ball was moved forward Kevin O'Halloran fired over the bar, with Sweeney receiving treatment by the Tipperary medical team.

Keenan got forward on the overlap to level the game after 20 minutes, at 0-3 all. The rest of the half was a dire contest but Derry managed to keep possession and play the percentages against the elements.

In the final attack of the game, Shane McGuigan was taken out off the ball by a Tipp defender and he composed himself to slot over the bar to give Rory Gallagher's men a narrow interval lead.

Tipperary again won referee Henry's throw-in and went on the attack at the start of the second half, where Jack Kennedy slotted over the bar from a free, taken from the ground.

Niall Keenan and Liam McGoldrick made interceptions in defence. The Coleraine man started a move and after linking with Heron and McFaul, he was fouled and McGuigan put Derry back into the lead with a thundering effort from close to midfield. It put Derry into a lead they didn't surrender.

McGuigan's work-rate typified his appetite to have an influence on the game. With Danny Tallon and Benny Heron now stationed inside, McGuigan was the playmaker and even tracked back to make a block from midfielder Steven O'Brien.

With 41 minutes on the clock, Tipperary's indiscipline began to cost them. An inch-perfect Benny Heron pass found Niall Toner but as the Lavey man swivelled away from his marker John Meagher, the Tipp man hauled him to the ground. He was sent to the sin-bin and McGuigan gave Derry a 0-6 to 0-4 lead.

McGuigan missed a simple free but when it came off the post, Heron was hauled down and the Slaughtneil man made no mistake at the second time of asking.

From the kick-out, McFaul hoovered up a loose ball and after a period of 'keep ball' outside the Tipperary wall, Liam McGoldrick found himself in front of goal and he guided his shot between the posts.

A foul on McGuigan was followed by his marker Alan Campbell pulling him down. The Moyle Rovers man was sent to the sin-bin, just as John Meagher was returning to the fold. In the same incident, Steven O'Brien was sent off for what appeared to be something he said to referee Henry.

It got even worse for Tipperary when Daire Brennan saw red for a foul on Padraig McGrogan and until Campbell's later return from the sin-bin, Tipperary were down to 12 players.

Derry's problem was that, like the Down game, they lost all shape. Rather than pushing on, they invited Tipperary onto them.

Frees from Sweeney and Kennedy had Tipperary back to within a goal.

Danny Tallon picked up a neat ball from Christopher Bradley but pulled his close-range shot wide. Alex Doherty sliced two shots wide and when presented with a goal chance from a McFaul pass 'Sammy' Bradley palmed tamely into goalkeeper Comerford.

Tipperary never looked like the threatening Derry but the concern for Rory Gallagher will be his side's lethargic finish to the game. Shane McGuigan ended a 20 scoreless minutes to give Derry a four point win.