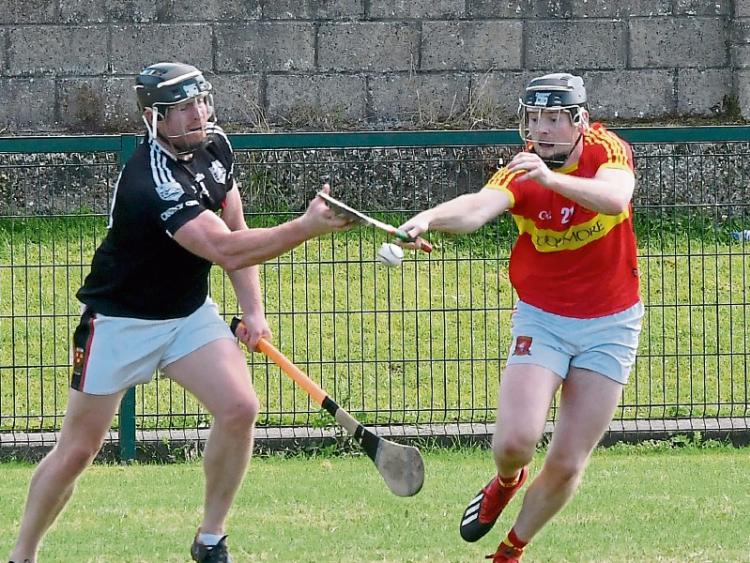 Group 1 of the FBD Insurance Seamus O’Riain Cup is wide open going into round 3 of fixtures, after Carrick Swans produced a stunning performance to beat Killenaule by 10 points at a sun-drenched Clonmel Sportsfield on Sunday afternoon.

All four teams in the group have tasted victory and defeat but the tenacious nature of the Swans’ triumph over The Robins makes them many people’s favourites to top the group.

To a man, the Swans were at it from the opening whistle and despite the scorching weather they maintained a high level of intensity throughout the 60 minutes to ensure the win.

Danny O’Hanlon was at the heart of the performance like he so often is, but this was far from just a one-man show. Every player contributed and that was evident when remarkably it took until the 34th minute for Killenaule to register their first point from play.

Before throw-in, a minute’s silence was observed  as a mark of respect to Carrick Swans’ vice-president Cissie Russell, who passed away on Sunday morning. And how Cissie would have approved of what was to come.

Gavin O’Halloran got the ball rolling when he fired over off his left side to edge the Swans in front and Eric O’Halloran doubled the advantage soon after when Kieran Lonergan’s long puckout was knocked into his path by O’Hanlon.

Eoin Barry responded with a pointed free for Killenaule but the next eight scores would all go the way of the Carrick side and it was a lead they never surrendered.

The scoreline however doesn’t tell the full story. Killenaule had scoring chances, mainly from frees, but it took them far too long to find their range.

When they did, it was Barry again who pointed but just like before Carrick Swans rattled off points in quick succession, this time five in-a-row from O’Hanlon (2 frees) Gavin O’Halloran (two) and Eric O’Halloran.

It could have been even worse for Killenaule when Aaron Dunne set up Gavin O’Halloran for a goalscoring chance but he had to settle for a point, after the Killenaule defence snuffed out the initial opportunity.

Killenaule made changes for the second half and showed signs of improvement. Ciaran O’Dwyer, Eoin Barry (3 frees), Paudie Feehan and Dean O’Connor added to their first half tally but they couldn’t make any inroads into the Swans’ lead. Gavin O’Halloran, who was excellent throughout, added another three points for his side and Dean Waters, Jamie Holloway and another O’Hanlon free kept Killenaule at bay.

With just 10 minutes remaining, Killenaule tried to reduce the deficit by going for goals but it just wasn’t their day. Eoin Barry added two more points from frees and Darragh Fitzgerald, Dean O’Connor and Gus Browne were also on target.

However yet again their efforts were matched by a hungry Carrick side who had point scorers in Jamie Holloway (0-3) and Danny O’Hanlon.

Overall, this was a day to forget for Killenaule but they know a win over Ballingarry in their final group game will see them advance to the quarter finals. Confidence may have taken a hit after this result and with injuries mounting it will take a huge effort to advance but they know their destiny is still in their own hands.

In contrast, Carrick Swans will be full of confidence after this showing. Gerry Walsh, Scott Hogan and Dean Kiely were immense in defence, with Gavin O’Halloran and Billy Murphy in command in midfield. O’Hanlon is their key man but Noel Obilor, Aaron Dunne, Eric O’Halloran and Dean Waters are also match-winners and they all contributed to the victory.