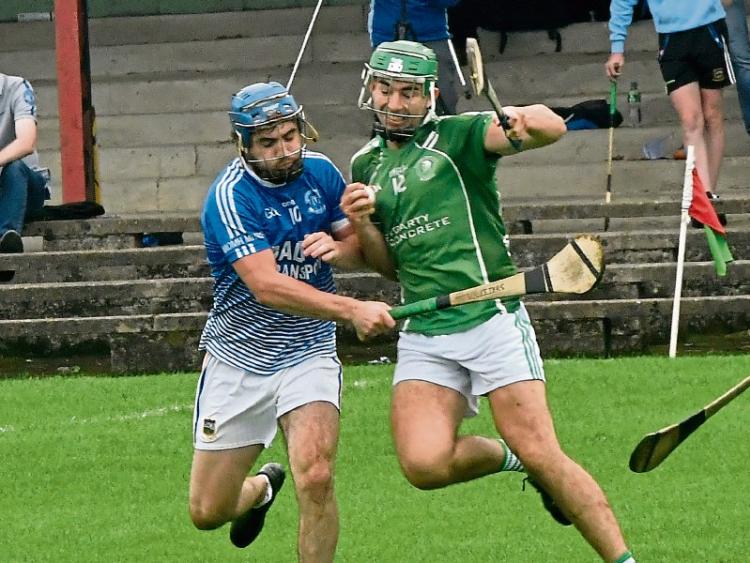 St Mary’s bid to reach the quarter-finals of the Seamus O’Riain Cup came up short on Sunday afternoon in Cashel when they were defeated by Templederry Kenyons in a tight, end-to-end encounter.

A sluggish start from the Clonmel side meant they trailed by six points after just four minutes and although they soon found their true form, they’ll reflect on that opening period with some regret.

This was a game that St Mary’s could have won. And when captain Richie Gunne made a goal-saving challenge to keep his side one point to the good with 10 minutes remaining, many thought it would be their day.

But just like many close games there’s usually a big moment and it came in the 54th minute. Seamus Kennedy’s free dropped under the crossbar, the clearance was rifled to the net but the goal was ruled out, adjudged to have been a square ball.

St Mary’s didn’t score again after that and lost momentum, conceding three points and the opportunity to advance to the knockout stages.

The day got even worse for St Mary’s when word filtered through that the other game in the group between Silvermines and Balina had ended in a draw, meaning the Clonmel side will now face a relegation semi-final.

Templederry Kenyons were good value for their early six-point advantage. Eanna Murray found his range as early as the first minute from a free and soon added two more. Adrian Ryan then blasted past Enda Dunphy to double Kenyons’ lead before Sammy Ryan pointed for St Mary’s to settle the Clonmel side.

Ryan added another point for Kenyons and Dunphy had to be alert in the St Mary’s goal to deny Sean Ryan.

However a Gearoid Buckley point, coupled with scores from Seamus Kennedy (two points) and Conor O’Sullivan kept Mary’s in touch.

By now, St Mary’s looked the better side and soon made it count on the scoreboard through Seamus Kennedy (0-2), Buckley and Niall Hoctor. Not to be outdone, Kenyons responded and had point-scorers in captain Gearoid Ryan, Adrian Ryan (0-0) and Sean Ryan.

But Mary’s finished the half stronger and reduced the deficit to the bare minimum when the ever-reliable Seamus Kennedy stroked over a further three points from frees either side of Niall Hoctor’s point.

St Mary’s carried that momentum into the second half and had their noses in front for the first time by the 34th minute. Two more Seamus Kennedy points drew them level after Gearoid Ryan had pointed for Kenyons but a beautiful Sammy Ryan point off his left side gave St Mary’s the advantage.

However, an injury to Enda Dunphy put a halt to the St Mary’s charge and Kenyons took advantage when play resumed by scoring three unanswered points.

In typical fashion, St Mary’s responded again and Seamus Kennedy fired over a free after his brother Sean was bundled over on his way to goal, but yet again Kenyons replied through Murray and Hogan.

By now it was anyone’s game and both teams threw everything at each other. Two more Seamus Kennedy points were matched by Adrian Ryan and Eanna Murray, but a Niall Hoctor goal for the Clonmel side with 10 minutes remaining set up a grandstand finish.

And then came the turning point. A long-range Kennedy free just fell short and when the resulting clearance was blasted to the net referee John O’Grady ruled it out, judging that a St Mary’s player was in the square in the build-up.

Buoyed by the let-off, Templederry Kenyons finished the stronger and ensured their passage to the quarter-final stage by rattling off three unanswered points through Eanna Murray (0-2) and Darragh Carey.

Disappointment then for St Mary’s and the defeat means that they now join Ballingarry, Kiladangan and Sean Treacys in the relegation semi-finals. However, on this performance  they’ll go into those games with plenty of optimism and belief.