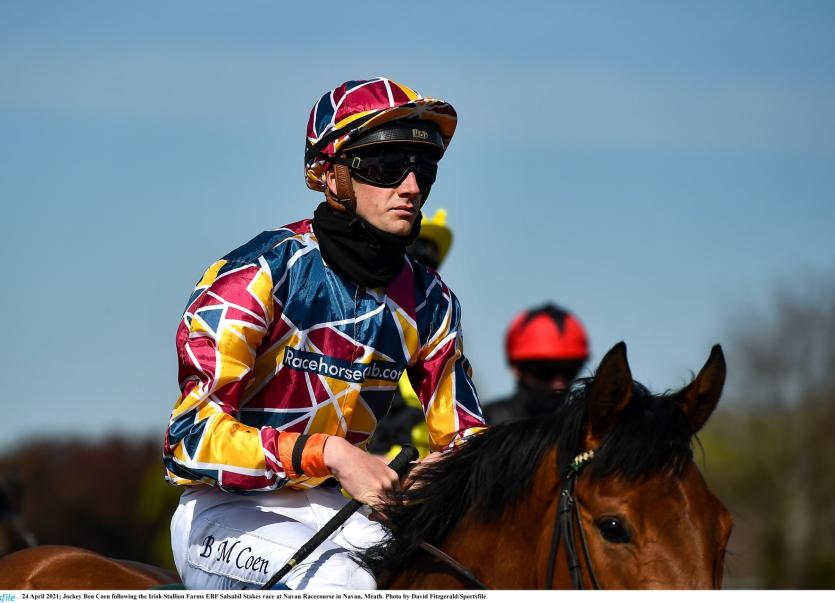 Killenaule horse racing trainer Andy Slattery has paid tribute to his nephew Ben Coen after he rode his first winner at Royal Ascot last week.
The Fethard jockey, who is only 19, achieved that significant milestone in his fledgling career last Friday aboard Create Belief in the Sandringham Stakes, which was also a first winner at Royal Ascot for trainer Johnny Murtagh.
Ben is the son of Ann (neé Slattery) and Shay Coen from Killusty and has made great strides in his career so far.
Former top jockey Johnny Murtagh described him as “the real deal” and “right up there with the very best in Ireland” when he appointed him as his number one jockey last January.
Ben rode 40 winners on the pony racing circuit and rode his first winner on the racecourse when landing the Ash Brothers Building Contractors Handicap (Division 2) on Timia at Dundalk in November 2017.
He was apprenticed to his uncle Andy Slattery, who has described him as “a very good rider. It’s great that Johnny Murtagh has that much confidence in him, having done it all himself as a jockey,” he said.
When he was only 16, Ben rode his first race on board one of his uncle’s horses at Limerick in October 2017, and Andy has described him as “very cool and collected. He’s not a fellow to get carried away and he doesn’t get too excited.
“He’s very sensible and isn’t one of those lads who will let success go to his head.”
People within racing began to sit up and take notice when Ben won the Irish Stallion Farms EBF Northfields Handicap on the Peter Fahey-trained Hamley on the second day of the Longines Irish Champions Weekend at The Curragh in September 2018.
He rode his first Group race winner when partnering the Johnny Murtagh-trained Know It All to win the Group 3 Derrinstown Stud Fillies Stakes at Leopardstown last July.
Ben’s two brothers have also made their mark with horses; older brother Luke has represented Ireland at eventing while younger brother Jake will start riding in October as an apprentice.
“They were here since they were young lads and were around horses all the time,” says Andy Slattery.
An interest in horses runs in the family and Ben and Andy’s son Andrew, who is also a jockey, are the same age.
As a child Ben was also successful as a Community Games competitor.
“He was good at everything but excelled in athletics,” says County Community Games PRO and fellow Fethard person Peggy Colville.
“He first competed in the county finals of the Under 8 60 metres in 2009, progressing to Under 10, Under 12 and up to Under 14 in 2014,” said Peggy.
“Ben won gold in the 100 metres Under 10 county finals in 2011 and represented Tipperary at the national finals in Athlone, when he reached the semi-finals.”
Another young Tipperary jockey, last year’s champion apprentice Gavin Ryan from nearby Killenaule, was also in action at Royal Ascot last week, finishing third on the Aidan O’Brien-trained Nicest in the Ribblesdale Stakes.