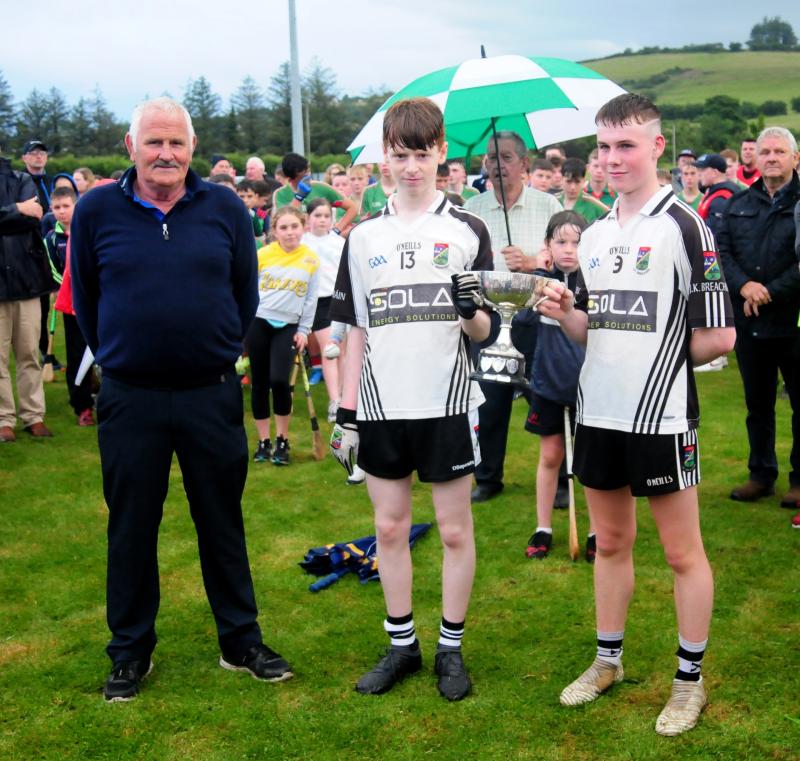 All your news from County Tipperary Bord na n-Og

County football finals are coming thick and fast as this tight packed season hits top gear. Some clubs making history while others move onto the hurling.

U13 Football
The semi-finals will have been played Tuesday 3rd finals will be fixed for the coming weekend details to be confirmed when finalists are known. In the ‘A’ Durlas Óg play Arravale Rovers for a chance to play Ballina for county honours. In the ‘B’ Moyne Templetuohy face Aherlow/lattin Cullen the winner playing either Toomevara or Mullinahone. In the ‘C’ Eire Óg Annacarty/Donohill take on Durlas Óg while Borrisokane face Moyle Rovers.

JK Brackens added a county A football title to go with last years hurling. An end-to-endcontest that you couldn’t take your eye off entralled all in attendance.

The stoppage did little to relieve the pressure as Brackens extended the lead to six points. Ciaran O’Shea and two more Jamie Ormonde points making for a very lobbed sided scoreline. Mullinahone attacks were more instinctive break aways. On twenty-three minutes one raised a crucial green flag as Colin O’Brien fired home a losse ball. Showing there would be no rolling over Matthew Direen points bookended a Jamie Ormonde score from play to leave two between them at the break 0-9 – 1-4
JK Brackens have a very strong spine however it would be the link up play of corner forwards Cormac Foy & Cian Sheedy that helped them get the vital scores. Both scored and assisted others to go with yet another Jamie Ormonde point for a four-pointlead. Mullinahone got scores at vital stages Alex Britton’s point before the water break cut the lead and filled the lungs. They lay seige on the Mid team'sgoal unfortuantely just missing chances and leaving gaps.

Brackens Dylan Quinlan and Cian Sheedy pointed to once again make it a comfortable lead ten minutes to play. Every tackle and stopped attack was cheered and the game would have one last twist. A long ball in came off a defender's hand Darragh Linnane punched home a goal. Alex Brittons point prior to that gave real hope with minutes to play.

Above: The JK Brackens panel of players

The North/Mid combo hit early and defended their lead after a game shaped by two Cian Ryan goals in the first two minutes. To be crowned County U15 ‘B’ football champions 2021

If this was the combo’s plan it couldn’t have gone any better, they were eight points up after three minutes. Shay Gleeson & Tadhg Whyte points were quickly followed by two killer goals for Cian Ryan. The pressure on kick outs and good play from the very tricky Oisin Dwyer made the remainder of the game an uphill struggle. The teams traded points before Cian Ralph manage to poke home a loose ball for a goal. Finn Jones pointing for Moyne, Oisin Dwyer the combo. Having a good game Liam Delaney set up Oisin Dwyer before pointing himself, six points up at the water break.

The game settled a lot more mainly due to North champions diligent defending. There were still able to strike punishing a poor kick out. A super Chris Dunne save came off the post Liam Delaney fired home, half time 3.06 – 1.03.

Moneygalll Clonakenny did have the wind against them in the second half yet still drove on. Extending the lead to eight points from Bobbie Gleeson and Tadhg Whyte. There was plenty of time on the clock and yet it was still Moneygall Clonakenny’s to lose. They only added two further points to their final tally. The challenge was put to the Moyne boys to break them down. They gave it their all, a brilliant Finn Jones tackle set up Eoghan Sumners goal.

Another attack was deemed to be halted illegally the penalty fired home by Finn Jones. Finn was doing well to have an influence on the game with Oisin Dwyer on his tail. The combo finished stronger Tadgh Whyte accurate all day hit two points one of which hit the cross bar and over. At the final whistle you couldn’t argue the result and a credit to a group of players so young to stick to the task so well against a team that knew its way to goal.

In front of an appreciative crowd, both teams delivered an epic contest that had everyone enthralled deep into the final quarter. Clonmel Commercials started the more settled and a well taken goal emphasised their early dominance.

As Ballyporeen settled to their task they ended the first quarter with a goal of their own from Sam McGrath which meant that both sides were level at the first water break. After the break both sides traded scores with Ballyporeen scoring two goals from the boot of Oisin Power and two well taken points from Jack Hanrahan. To their credit Commercials matched every score with some well taken efforts of their own and notched up 1-06 in the same period to leave the Clonmel side one point up at half time on a score line of 2-07 to 3-03.

Seven unanswered Ballyporeen points from six individual players after the water break finally broke the Clonmel resistance and when referee Andrew Purcell blew the final whistle the score was Ballyporeen\Skeheenarinky 5-10 to Clonmel Commercials 3-09. Both sides gave everything, and the game was an entertaining spectacle from start to finish.

While Ballyporeen took the spoils huge credit needs to go to the Commercials side who fought right to the end. Ann Fleming was on hand to present the Cup to winning co-captains Corey O’Gorman and Josh Kearney amidst jubilant scenes.