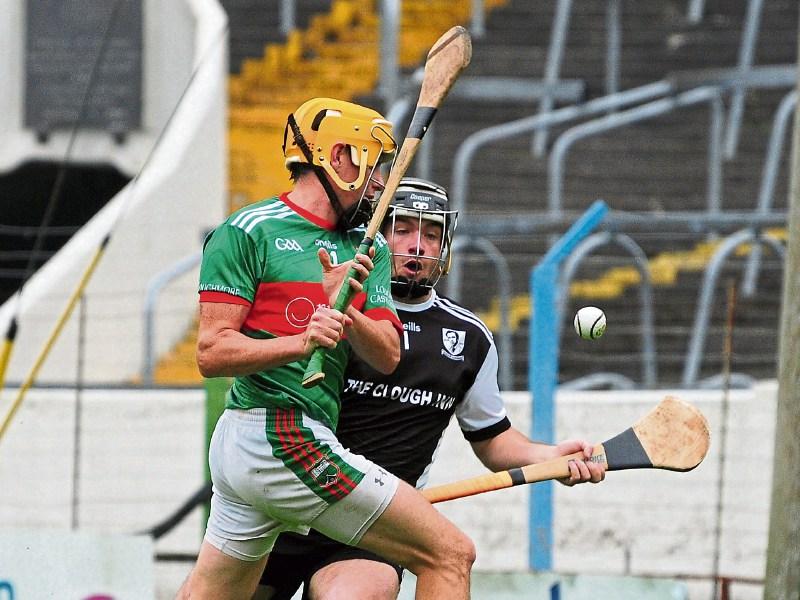 The game was played in Holycross this evening

A third quarter which yielded 1-9 for Loughmore Castleiney saw them overcome a gallant Moycarkey Borris challenge in the FBD Insurance Tipperary county senior hurling championship at Holycross this evening.

Last years defeated county finalists once again showed their ability to get scores and the tigerish defensive play which saw them progress to the ultimate day in Tipperary was there in abundance after they recovered from a slow start to work their way into a position of dominance.

A goal  from Kevin Cummins gave Moycarkey Borris a real fillip in the first quarter and they led by 1-6 to 0-8 thanks to Rhys Shelly, Kieran Morris (3) and Kieran Cummins points. But, Loughmore Castleiney bagged  six of the last eight points of that quarter with John McGrath (4), Ed Connolly and Noel McGrath helping to ease them into the contest.

Loughmore Castleiney were in front with John McGrath, a superb sideline cut from Noel and a beauty from Noel again, only to see Moycarkey Borris responded with Max Hackett, Kyle Shelly and Kieran Morris points, giving them a 1-11 to 0-12 interval lead in what had been a tough, hard, uncompromising clash.

But, once they turned around for the second half, Loughmomre Castleiney were a different outfit. Ciaran Connolly set the tone after just 8 seconds, and a procession of points from sub Evan Sweeney (3), Brian McGrath, John McGrath, Noel McGrath (2) and Ciaran McGrath, to go along with a beautifully worked goal from John in the 7th minute, left Moycarkey Borris reeling - they had only managed Kieran Morris and Niall Heffernan points in the same period.

Rhys Shelly had denied Noel McGrath a goal at one end, while at the other end his brother Kyle rattled the upright with a goal attempt which his side badly needed. Instead, it was goalkeeper Rhys who netted for Moycarkey Borris after referee Conor Doyle awarded a penalty immediately after the water break, for an incident which occurred just before the break - Shelley finished with 1-3 to his name and was the top scorer for Moycarkey Borris.

Loughmore Castleiney wiped out the goal within minutes thanks to Aidan McGrath, John McGrath (2) and Evan Sweeney points and though Moycarkey Borris finished strong and clipped over 1-4 in the closing segment, they had too much of a gap to bridge despite subs JJ Darmody and Jack Morrissey pointing and another sub Anthony McKelvey goalling right at the death.