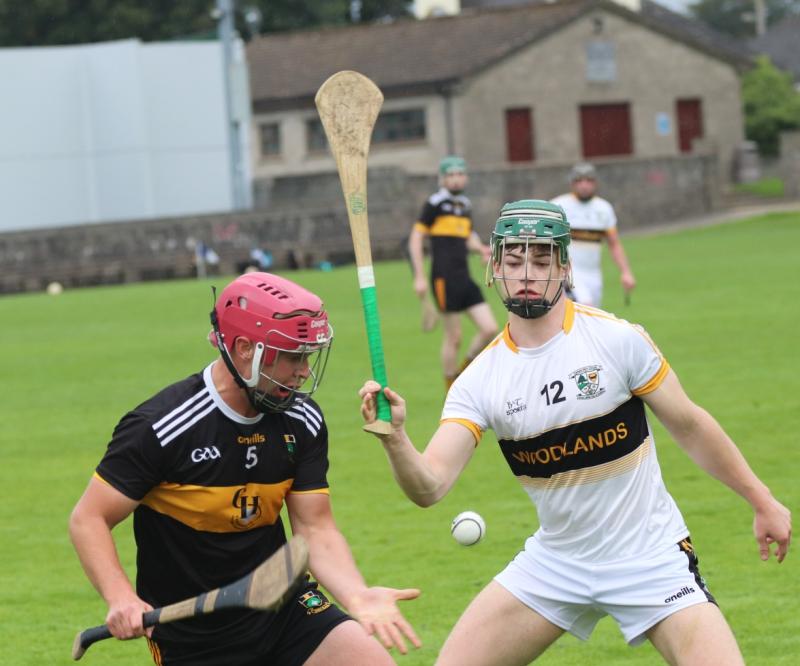 Declan Hennessy tries to get an attack moving for Emly, with Reuben Bourke (Kickhams) closing in

Emly booked their place in the semi-finals of the Tipperary Co-Op west junior B hurling championship with a narrow win over Knockavilla Donaskeigh Kickhams on Saturday evening in Cappawhite.

Aidan O’Heney’s injury-time point secured Emly's victory as they rallied late on, outscoring their opponents 1-5 to 0-1 in the final thirteen minutes to seal what looked like an unlikely win at one stage in the second half.

With fifteen minutes of normal time to be played Kickhams looked to be in control when Patrick O’Brien found the net and the same player followed with a point two minutes later to put six between the sides.

O’Brien turning back to steady himself, when possibly a goal was on, may have sealed victory for Kickhams, but it was Emly’s determination and hard work over the last quarter that saw them edge through to a very first semi-final appearance in the competition.

The opening half was a fairly even affair, with Kickhams deservedly holding a slight advantage at the break. Shane Carroll opened the Emly scoring in the opening minute from play but they struggled over the next six minutes to add to this with a series of bad wides.

Kickhams opened their account through Alan Butler and quickly followed with points from Reuben Bourke and Peter Comerford (place ball). A long-range free from Conor Phibbs and a first of the day from Aidan O’Heney tied the game at three points apiece. The opening quarter continued in a tit-for-tat fashion, with the sides level on four further occasions before the water break was called with the sides at 0-7 each.
Kickhams looked the far more threatening and settled side,especially as the second quarter moved on. Aidan Duggan, Conor Horan and Paul O’Dwyer were to the fore in defence, with Peter Comerford getting on a lot of ball around the middle.

They struggled, though, to make it stick in the final third, with a lot of loose ball being hoovered up by the Emly defence, where Conor Phibbs and Cian Quish were to the fore. Shane Farrell added two more points to his account for Kickhams while Paul O’Heney added Emly’s sole point of the quarter to add to his earlier tally.

Kickhams got a huge boost at the start of the third quarter. First Shane Farrell opened with a point before Declan Ryan found the back of the net. Ryan followed with a point, as did Shane Farrell, to see Kickhams ahead by double scores (eight points) in the sixth minute of the half.

If ever a score was more important for Emly it was their opening score of the half. Aidan O’Heney forced his way past defenders to fire to the top of the net and Robert McEniry followed with a point to cut the deficit in half.

Patrick O’Brien pointed but three points from Aidan and Paul O’Heney (free) and Joey Lonergan brought the gap to just two points.
Kickhams looked to have weathered the storm when Patrick O’Brien goaled after the goalie failed to control the sliotar. A further point and Kickhams looked as if they could hold out, but Emly’s spirit refused to give in.

Their hard work and running at the Kickhams defence caused problems, which were punished by the accurate Paul O’Heney, while Shane Carroll, who was involved in a lot of Emly attacks, burst through for a well-taken goal. Kickhams' sole point came from a long-range effort from Jack Ryan.

Emly now looked the more dangerous and while Kickhams were getting possession to their forwards it wasn’t sticking. A minute into injury time and with the game in the melting pot it was Aidan O’Heney, who had a huge impact on proceedings in the second half, who popped up for what would be the winning score.

Emly will now meet Clonoulty/Rossmore in the semi-final.