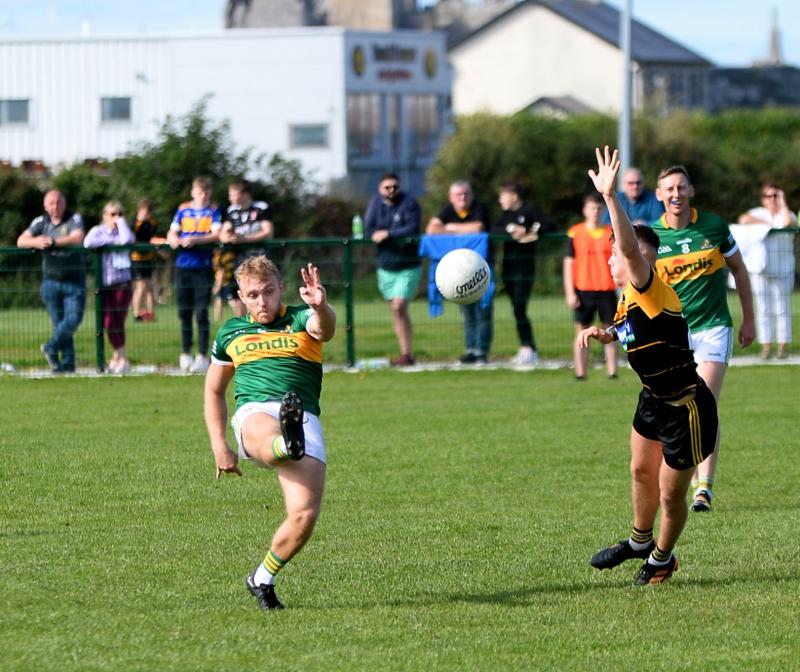 Clonmel Commercials Kevin Fahey kicks one of his two points despite the attempt of Arravale Rovers Johnny Ryan to block. Pic: Michael Boland

Clonmel Commercials eased their way into the County Senior Football Championship semi-finals with a very comfortable victory against Arravale Rovers in the first game of a double bill at Leahy Park, Cashel this afternoon (Saturday).

While the odds-on favourites for the county title were expected to progress, the manner in which they dismissed the West Tipperary side came as a surprise. In a disappointing contest from a neutral perspective, the vastly more experienced and seasoned Commercials side never had to go beyond third gear, such was their dominance, especially when they settled themselves after the first quarter with the sides level at 0-2 apiece.

By half-time they had pushed on to lead by seven, Arravale Rovers failing to raise a flag in the second quarter.

The second half, almost in its entirety, was dominated by Commercials who outscored their opponents 0-12 to 1-0 in that 30 minutes of one-sided play; Arravale’s only score, a Cormac Maher goal, coming as a consolation eight minutes from time.

So Clonmel Commercials, who fielded without either of their county players, Jack and Conal Kennedy, advance without ever being really tested but will surely face much sterner opposition from here on in their quest to put their name on the county title for a 20th time next month.

On an alluring autumn afternoon for football, Commercials were quickly on the scoreboard with a Cathal Deely point within 90 seconds. Arravale were enjoying loads of possession early on without making inroads and it was break from Seamus Kennedy that led to the next score, a Kevin Fahey point doubling Commercials’ lead after 10 minutes of play.

It took the Tipperary Town side 15 minutes to get on the scoreboard, a sweet point from the outside of the boot from their hard-working wing-back Cian Ryan. Within 60 seconds they were on level terms with another excellent point from Cormac Maher. But that was it for them they wouldn’t raise another white flag over the remaining 44 minutes of play, something that will greatly disappoint a young and developing team who were hoping for at least a cut off Commercials.

That little prod of parity at 0-2 each, focused the minds of the Tommy Morrissey-managed Clonmel side and the third quarter was theirs with a procession of points up to half-time to give them that seven points interval advantage. Those scores came from Peter McGarry (who was a late starter when Conal Kennedy pulled up pre-match), Colman Kennedy, Jason Lonergan (3, 2F), Sean O’Connor and Seamus Kennedy who finished a length of the field counter from full-back with a fine score. 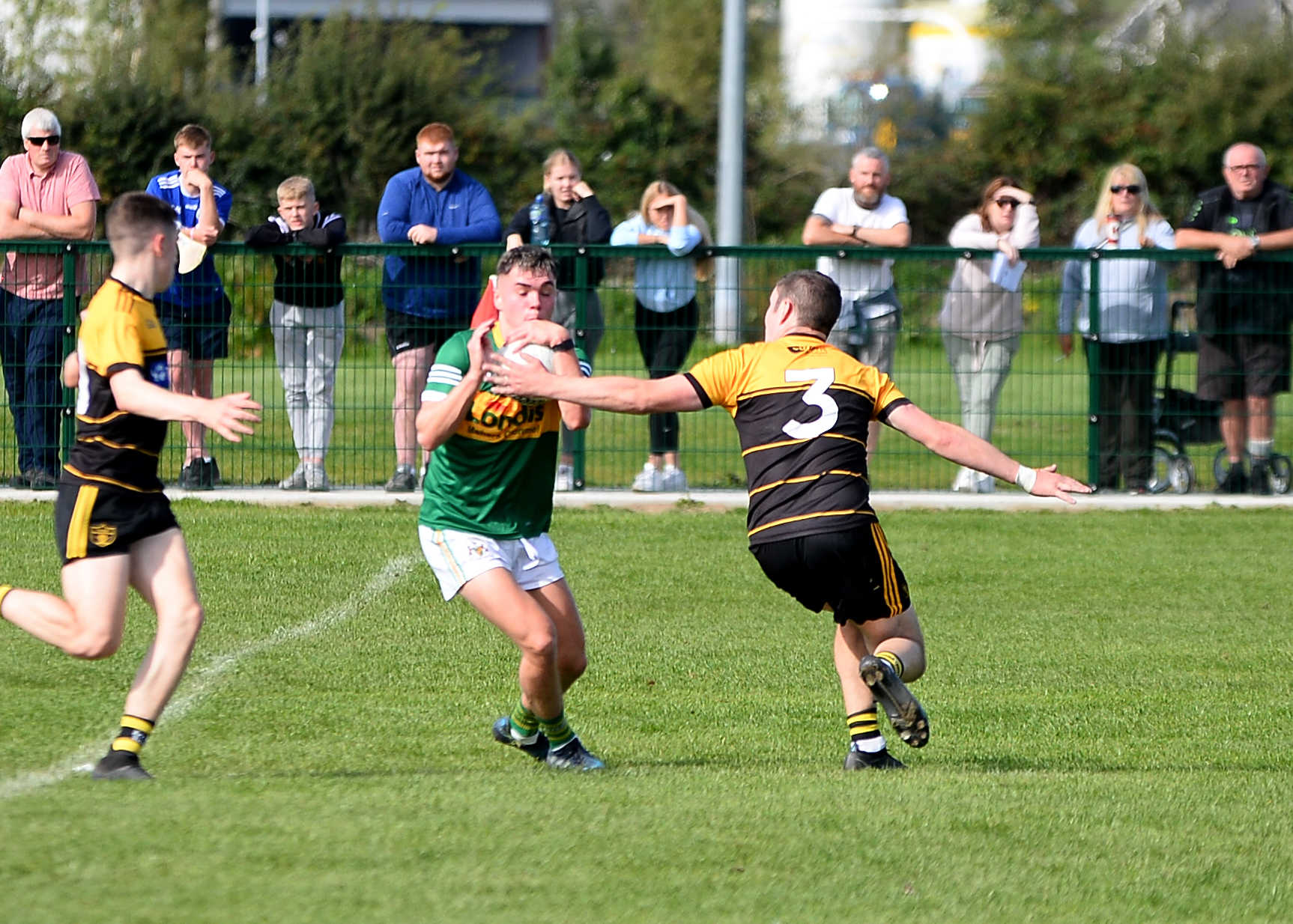 Besides their two points, Arravale registered just one wide in the opening half and only two more post-interval, demonstrating the few opportunities they had all day against a tight-marking Commercials rearguard.

On and on the Commercials scoreboard ticked over and they were nine clear five minutes after the resumption following points from a Michael O’Reilly 45 and another trademark hard-worked effort from centre-back Kevin Fahey.

The precautionary withdrawal of Michael Quinlivan after six minutes of the second half would be a concern on another day, but disappointing to say it, this encounter wasn’t too much stiffer than a hard training session and by the end of the third quarter Commercials’ lead had been extended to 0-15 to 0-2.

After a Michael O’Reilly 45 came back of the upright, Commercials recycled possession for Peter McGarry to point, and three further points followed over the next five minutes from Sean O’Connor (2) and Colman Kennedy after another fast-flowing Commercials attacking movement.

The last quarter was academic with the outcome long decided. In the 46th minute Jason Lonergan converted a free, won by the lively substitute Rory O’Dowd and the impressive Aldo Matassa who would finish strongly stretched the gap to 15 points by the 51st minute, withstanding a strong challenge before turning to score from 30 metres out. 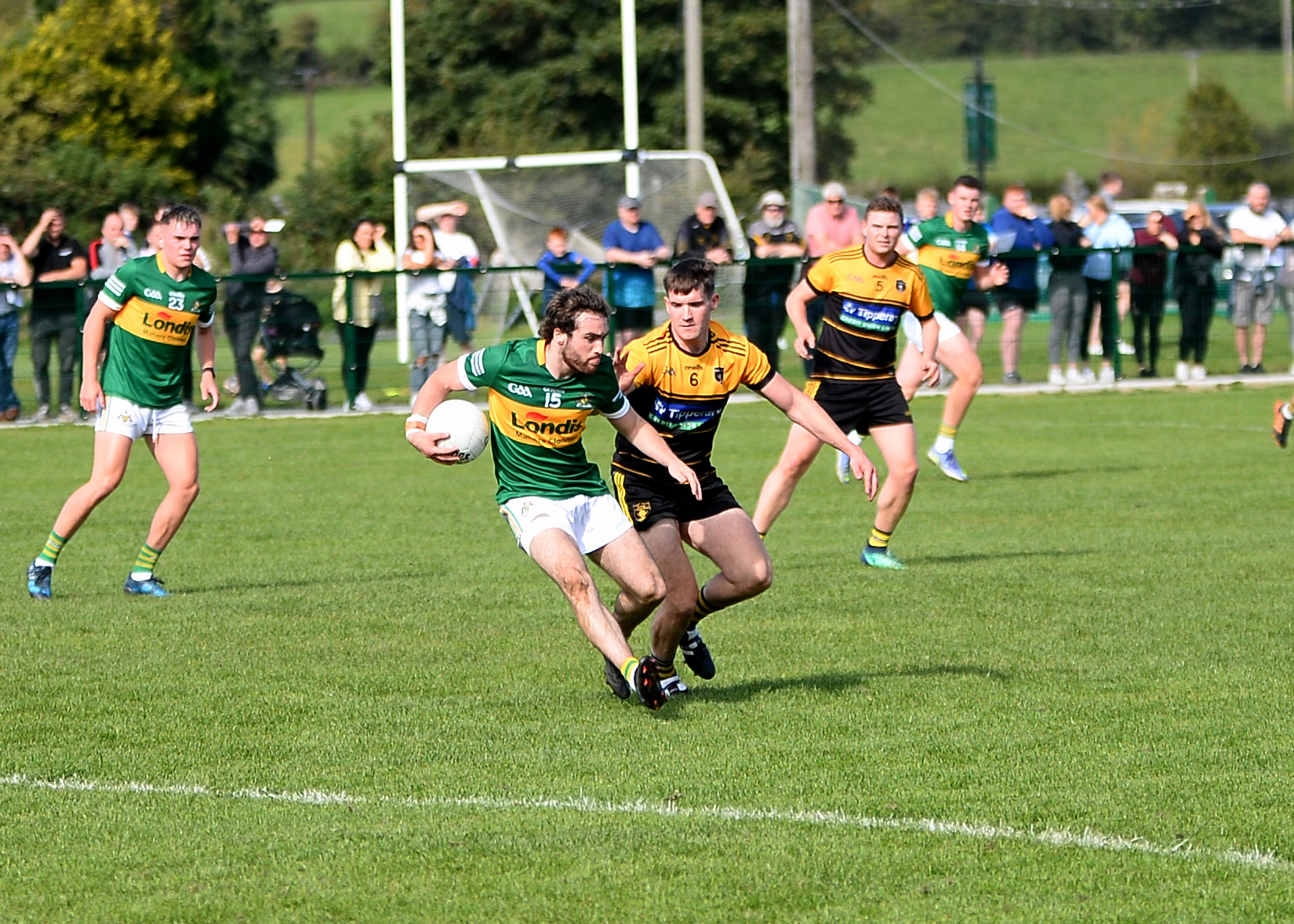 Commercials' Ross Peters, who recovered from a heavy first half knock, went on to have a fine game. Here he is under pressure from Arravale Rovers' centre-back Niall Fitzgerald. Pic: Michael Boland.

Then, almost out of the blue, Arravale Rovers worked a goal with Shane Leahy’s determined effort allowing him to draw the Clonmel defence and Cormac Maher to finish the move low to the net. It was a mere consolation for the westerners with only eight minutes left on the clock.

In the dying minutes Commercials added four more points from Cian Smith (free), Matassa, Michael O’Reilly (free) and the last of the day a well deserved score for the tireless Ross Peters.