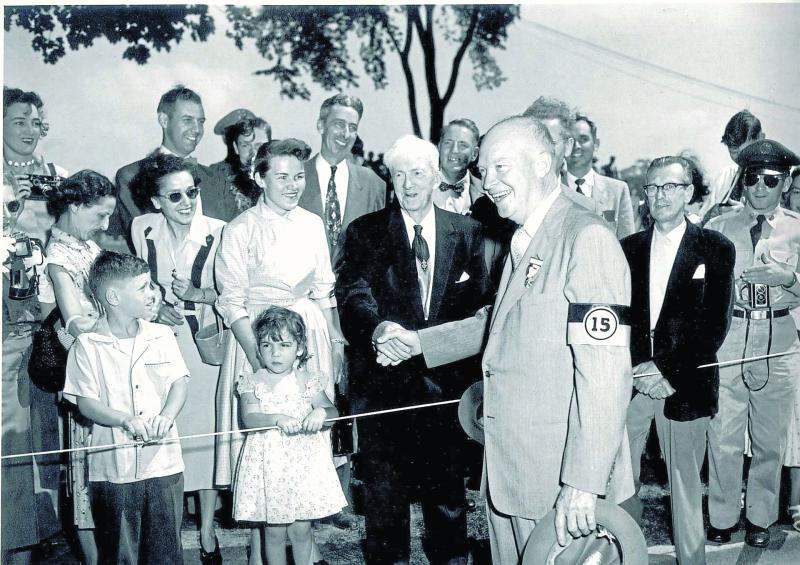 Following an invitation to the St. Patrick’s Day parade in Ringwood, New Jersey in 2003, Lily O’Brien, then Mayor of Templemore, could never have imagined that the connections made that weekend would bring such joy to so many people in Templemore.

On that trip Lily and her husband Michael struck up a friendship with U.S. policeman Joe O’Sullivan. Conversation flowed and when Joe heard that Templemore had their very own Pipe Band the possibility of them coming to a future parade was first mooted.

Lily and Michael weren’t long back from America when Joe O’Sullivan arrived in Templemore. He met Joe Barry and the other band members during practice in St. Mary’s Hall. The deal was soon struck and it was agreed that the band would head Stateside for the 2005 St. Patrick’s Day parade in Ringwood.

It was the chance of a lifetime for so many members, friends and supporters of the Thomas McDonagh Pipe Band who have served the town so well since 1963.

In advance of the trip Martin Fogarty, Michael Fogarty and Michael O’Brien were invited over to the 2004 parade on a fact finding mission. While there Joe O’Sullivan and Bert Prol arranged a trip to the U.S. Military Academy at Westpoint, some thirty-four miles north of Ringwood.

And it was here that the journey began a new chapter as the full story of Boola native, Marty Maher, unfolded. While the touring party had some knowledge of Maher’s story at Westpoint, they never realised the impact the Tipperary man had in such an illustrious academy.

He and his four male siblings had emigrated from Ireland at the tail end of the nineteenth century to seek a better life in America. Marty joined his brothers Denis, William and Joseph in the Army Service Detachment at Westpoint while Thomas became a policeman in the Cadet Barracks.

Marty began as a waiter in the canteen before enlisting in 1898. Such was his impact at Westpoint that he spent his entire Army career there. He served as a swimming instructor and gym custodian before rising to the rank of Tech Sergeant.

The Cadets were always his favourites and his tales and anecdotes put a smile on many a face.

He became an iconic figure at the famous academy and was a friend to all including future President Eisenhower and Generals MacArthur, Ridgeway, Paton, Arnold and Wedemeyer.

Following his retirement in 1928 he remained on as custodian of the gym, worked with the Army Athletics Association and continued as a swimming instructor until 1946.

A testament to his popularity came in 1955 when his life was portrayed in the film “ The Long Gray Line” in which Tyrone Power depicted Marty while Maureen O’Hara played his wife, Mary O’Donnell – a Donegal native whom he had married in 1911.

His father, Martin Snr, had followed his children to America in 1904 where he lived with his son Joseph. He died in 1912 and to this day is the only civilian buried in Westpoint. Marty and Mary never had children of their own but they did raise Marty’s niece Peg, Denis’s daughter, and it was through her that this remarkable story continued.

The two Michaels and Martin returned from America with all the necessary information for the following year’s trip. Another surprise was in store for the band as our new American friends had secured an invitation for the band to play in the 2005 New York Parade.

The following months were spent securing flights, accommodation and looking after the various details. The lure of the trip proved very appetising and eventually a crew of 92 headed for America to celebrate our national day on the other side of the pond.

The New York parade came first and what a thrill it was for all as the band marched up 5th Avenue. Following three days in the Big Apple the entourage headed for New Jersey and the Ringwood parade where they enjoyed the ceol agus craic for a further three days. 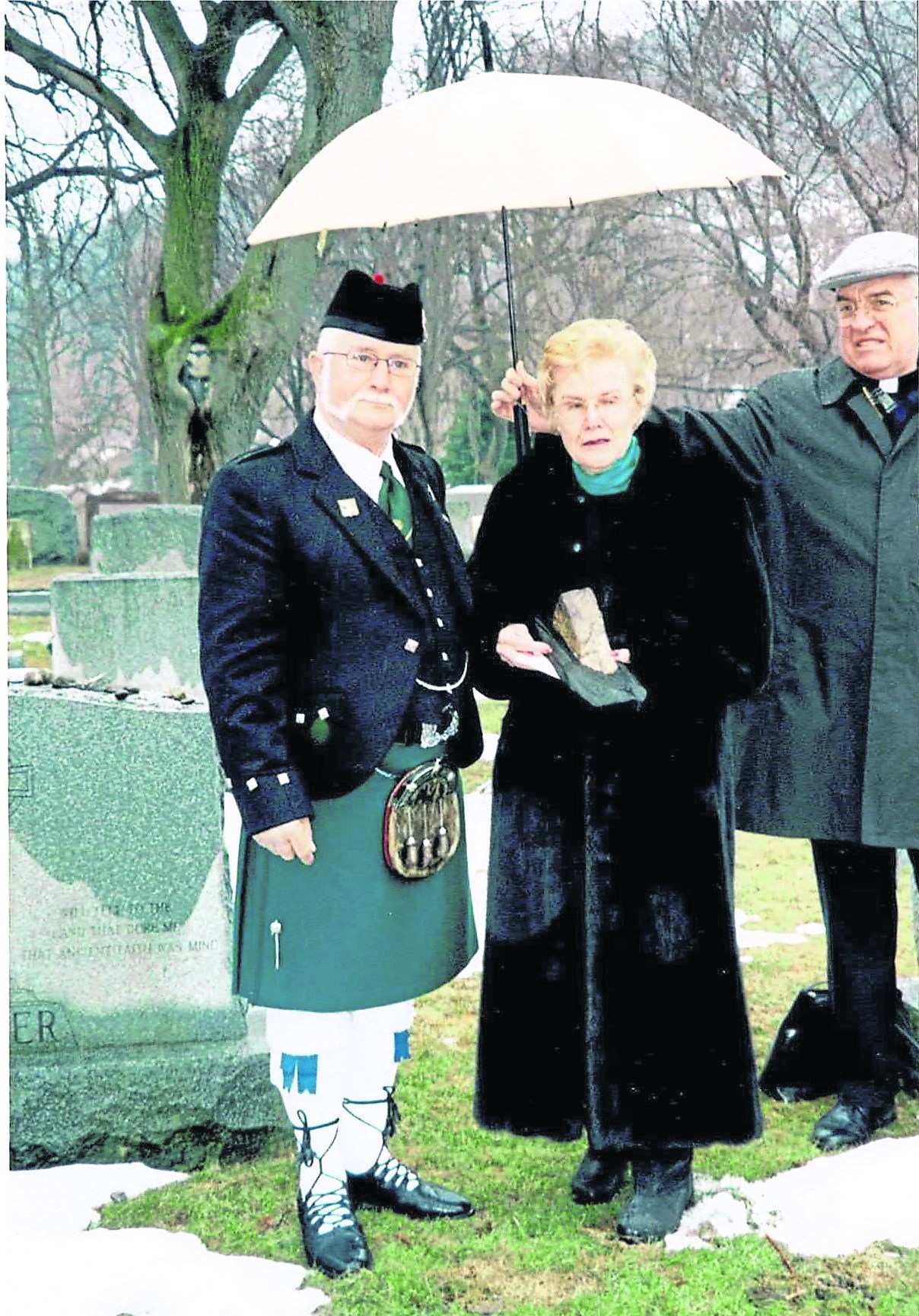 Joe Barry presenting Peg with the stone from Marty Maher's home in Boola. On the right is Fr. Jerry who was the Chaplain at West Point at the time of their visit in 2005

While in Ringwood Joe O’Sullivan had once again arranged for a small delegation to visit Westpoint and to meet Marty’s niece Peg Matone. Before departing Martin Fogarty and Joe Barry visited the ruins of Marty’s old homestead and took a stone which, thanks to Pat Fogarty, was polished, mounted on a piece of bog oak and had the Thomas McDonagh cap badge attached.

On a snowy day in March 2005 at Westpoint Cemetery this beautiful remembrance token was presented to Peg and members of her family at her Uncle Marty’s grave. Joe Barry, Martin Fogarty and David Cummins played a selection of Irish airs in Marty’s memory.

Ironically, some 59 years earlier, those same Irish airs were played at Westpoint by the Army Band as the Cadet Corps honoured Marty’s retirement in 1946 with an unprecedented full-dress review – the only Tech Sergeant ever to receive that honour.

A great friendship with Peg began that day and she kept in contact with us for many years after. A teacher by trade she had a great interest in politics and was very involved during the Kennedy era.

She paid many visits to her beloved Ireland and during her 2007 visit she came to Templemore with her daughter Debbie. She visited her grandmother’s (Margaret Tobin) unmarked remains in Bourney church yard and with the kind permission of Fr. Corbett, and the financial assistance of John Guilfoyle, the Moloughney family and many other groups a memorial stone was erected to the memory of her Uncle Marty inside the gates of Camblin churchyard.

Members of the Ryan family from Graffin were also present as research carried out by Esther O’Brien provided their connection to the Maher family. Another great friend of Peg’s, Quarter-Master Sergeant Dom Wixted had all the O.N.E. boys in tip-top shape which greatly added to the occasion.

A car load of O’Donnell relations from Donegal also made the long journey south to be part of the day. That particular visit ended with a mighty session in Sullivan’s pub, Killea where Peg got a marvellous welcome from Margaret.

Another present that evening was Senator Noel Coonan and his wife Pauline who were also instrumental in many of these events while the session itself was supervised by Moll Treacy who may have even sang a song or two.

It was always Peg’s intention to return for another visit but deteriorating health scuppered her plans. We exchanged letters, photographs and Christmas cards over the years but as happens in many cases a year or two passes without a visit from the Postman.

On January 18 last I got a late Christmas card from Peg’s daughter Frances in which I learned that both Peg and her daughter Debbie had gone to join Uncle Marty above the clouds. Who could have imagined how one young man’s emigration in 1896 could have had such a profound effect on the lives of so many over the following 125 years.

On behalf of everybody with a connection to this beautiful story I would like to express my deepest sympathy to Peg’s daughter Frances and Debbie’s son, Sean. May Peg and Debbie’s gentle souls rest in peace.

By Vourneen Barry, in conversation with Ronan Loughnane.