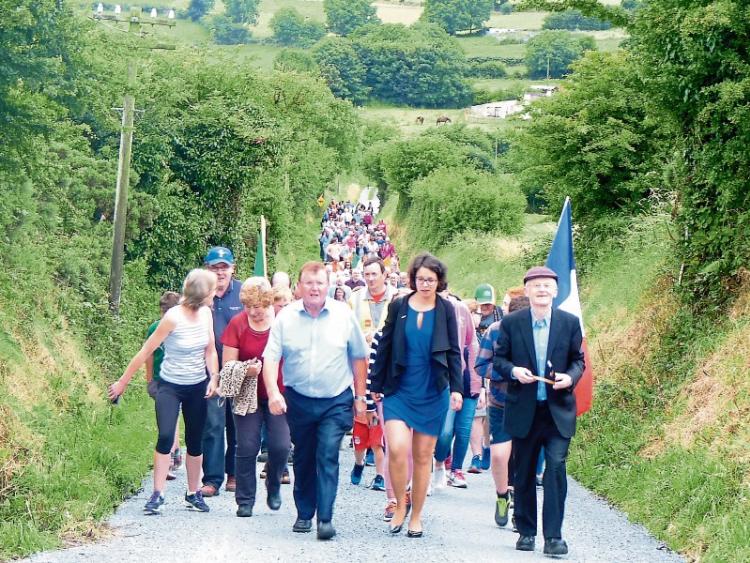 The Archbishop of Cashel and Emly, Dr Kieran O’Reilly, is to lead this year’s Famine 1848 Walk in Ballingarry.

The Walk takes places on Saturday, 29 July at 3pm. The Walk commemorates all those who suffered during the Great Famine: the million who died and the million who fled Ireland as refugees.

The Walk also remembers the attempt by William Smith O’Brien, M.P., to stage a moral force revolution in 1848 in Ballingarry in response to the Famine.

The Walk starts at the Young Ireland 1848 and National Flag monument in the village of The Commons and finishes at Famine Warhouse 1848, the state national heritage site and visitor attraction.

The Walk covers a mile and a half of gently ascending ground and usually takes about forty-five minutes to complete.

Those who do not feel like walking or are unable to walk are welcome to come and participate at the house museum, an important site in Irish national history.

Archbishop O’Reilly is well placed to speak on the theme of famine, emigration and refugees in the contemporary world as he is a member of the Society of African Missions.

At the beginning of his ministry he worked as a missionary priest in Monrovia in Liberia in West Africa. He also served in Nigeria.

He was superior general of his order before being appointed Bishop of Killaloe in 2010.

He succeeded to the archbishopric of Cashel and Emly in 2015. Archbishop O’Reilly will deliver the Walk leader’s speech at the end of the Walk.

Famine Warhouse 1848 is an OPW site and a museum.

The historical exhibition in the house tells the story of the great famine, rebellion and emigration in mid-nineteenth century Ireland in the context of 1848 as a momentous year in continental European history.

There is an audio-visual room and a tea-room where light refreshments will be served on the day.

The site is in the hidden Ireland in the Slieveardagh hills but mid-way between the Rock of Cashel and Kilkenny City.

It is close to the Tipperary border with Kilkenny and there are scenic and extensive views at 1,100 feet across Leinster.

The Walk, an annual act of witness and remembrance, is organised by the Ballingarry 1848 Historical Society and is now in its eleventh year.

It has become a great occasion attracting national and international visitors. All are welcome.

It takes place whether it rains or it shines. Participants are advised to be prepared for changeable Irish weather conditions and to bring both a sun hat and an umbrella.

On Sunday, 30 July, in the tea room in the afternoon, there will be music and readings of prose and poetry on the Famine and Young Ireland. The music will be by Ballingarry’s contemporary trad group, the ‘Mangled Badgers’. There will also be guided tours explaining what happened at the house in 1848.

The state National Famine Commemoration will take place at the Famine Warhouse 1848 on 30 September.