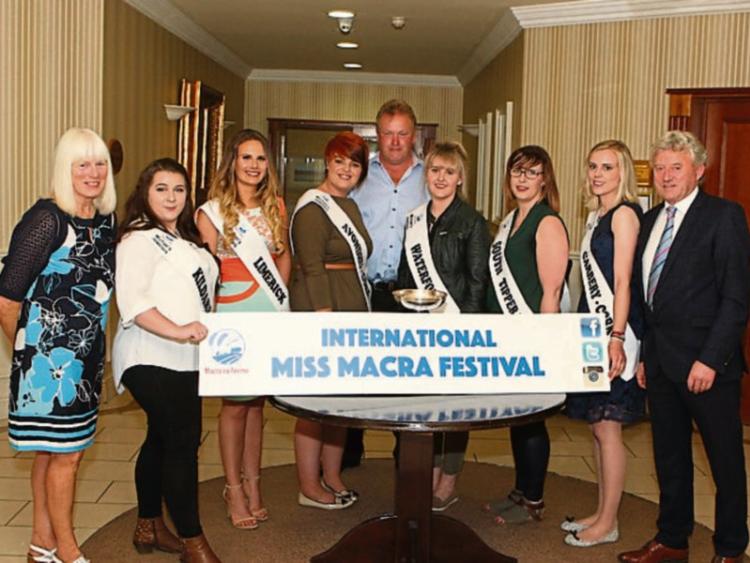 At the launch of the International Miss Macra Festival

This year celebrates the 46th anniversary of the International Miss Macra festival.

This festival is run by Clonoulty/Rossmore Macra na Feirme club over the Friday, Saturday and Sunday nights of this August Bank Holiday weekend with girls travelling from all over the country and beyond to Tipperary to compete for the honour of being crowned International Miss Macra 2017.

The event will be held in Thurles for the second successive year but one event is scheduled for Clonoulty itself. The Friday night will take place in Coffey’s of Stouke with the Thurles events in The Dome and the Anner Hotel.

Next the contestants will take part in a Zumba class in Clonoulty Community Hall where contestants, host families and local people will get the chance to ‘meet and greet’; a long-standing tradition of this festival.

The Friday night will be comprised of a Charity Traditional music night which allows the contestants and supporters to let their hair down and enjoy live music from the best musicians in the area in what will be the most enjoyable of events.

Doors will open at 9:30pm sharp with further full details on tickets available on the website.

Saturday morning heralds an intense day for the contestants, as they must rise early and prepare for their private interviews in front of a 3-person judging panel.

The judges are Joan Pollard Carew, Declan Ryan and a new judge from Spin South West.

Saturday evening’s Cabaret will be in the Dome, where the contestants will be interviewed on stage two at a time by the interviewer from Spin SW.

The choir accompanying this ceremony is comprised annually of members of Clonoulty Rossmore Macra and members of the local community.

Following Mass, the contestants then take part in a family fun field day in the Clonoulty G.A.A grounds.

This enjoyable event is a mixture between a Macra Field Day and a School Sports Day. Here the contestants will have to show their worth by participating in many country-inspired activities.

All this will be followed by a barbecue, weather permitting, which will be cooked by local butcher Joe Hammersley.

Sunday night is the International Miss Macra Gala Banquet in the Anner Hotel, the highlight of the Festival with the winner announced at midnight.