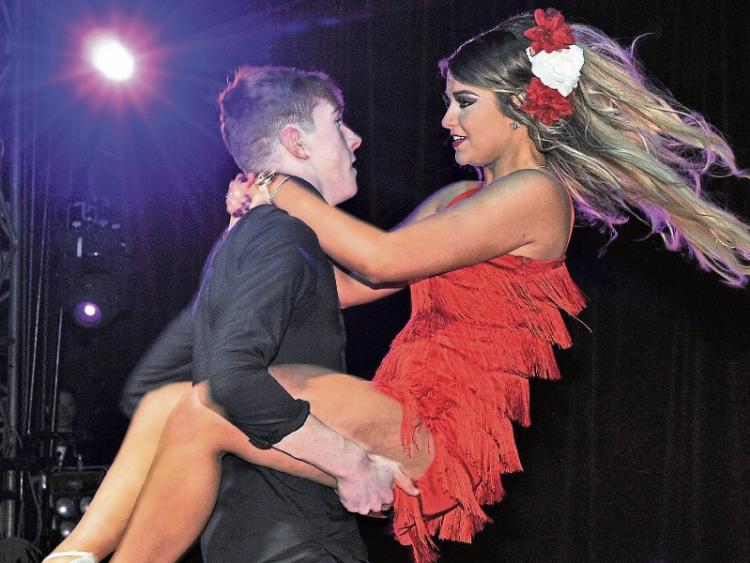 Chloe Flanagan and JJ Bennett on the dance floor.

Following on from the success of Strictly Dancing in the Park last year, Arravale Rovers GAA Club decided by popular demand to give it another go, so  following Storm Emma, a Strictly Storm hit Tipperary Town.

Brendan Cummins stepped out from behind the judges table this year to take on the role as ringmaster, sorry I mean MC. He got to know each of the dancers personally and did an excellent job to make them all feel relaxed when chatting in front of an enthuastic audience of over 850 people.  But I think his toughest job on the night was keeping control of the judges. What a mixed bunch. He clearly had his hands full.

Marian Fossett was on the look out for razzmatazz and the showbiz factor and she was not disappointed.

Next we had Mattie Mc Grath TD whose credentials are well known. He was very encouraging to all the performers but wasn’t too keen on producing the 10 paddle saving it for just two couples.

Sinead O Brien occupied the next seat at the judge’s table. Sinead has to be one of the busiest people in Ireland (even busier than Mattie). Sinead is a fashion blogger and she is an experienced performer so knows how the dancers are feeling facing such a huge crowd.

The fourth judge was a quiet chap. Shy sort of fella. Hardly have a word to say. But he wasn’t available so instead we had Willie Bun. Wille needs no introduction around these parts. The fear in the dancers eyes when Willie took the microphone to speak was almost worse than the nerves they had when the saw the huge crowd they had to perform in front of.

Arravale Rovers four clubs came together for this event with Senior, Juvenile, Ladies Football and Camogie Clubs all helping to run it. It was a massive undertaking but with all the clubs working together the night was a success.

There were 17 couples ranging in age from 16 up to older (and in some cases much older). The group got on very well and it seems the banter on the group Whats App was very entertain at times. They supported each other and new friendships have been made.

One of the unique features of Strictly Dancing in the Park was the venue. A circus big top set up in the grounds of a GAA club. The Big Top was almost like another performer on the night. It created such a wonderful atmosphere to have  over 850 people seated all with excellent views of the dance floor  The light and sound added to each couples performance.

Of course it would not have been possible if it weren’t for the dancers. What a special group of people. They came together before Christmas all a little daunted as to what exactly they were letting them selves in for. At times they found it tough. Trying to find time to practice. Struggling with the routine. Decisions about costumes. But they found strength in one another and supported each other as friends do.

Bridget Whelan and her dance instructors were available to help the dancers and her experience was invaluable.

Each and every couple was brilliant. The routines were entertaining and well rehearsed. They showed huge commitment and it was much appreciated and will not be forgotten.

There was great excitement when the winner of the €1000 slide robe prize kindly sponsored by Cavanagh Kitchens and Bedrooms was announced.

Then it came to the business end of the evening because a winner needed to be chosen. The top five dancers were chosen by public vote and then the judges had the very hard job of selecting the top three couples.

In third place were Clodagh Ryan and Brian Roche who danced a very energetic Charleston. They had big shoes to fill as Clodagh's Dad and Brian’s Mum both danced in last years competition.

Eimear Sharpe and Sean Smith were announced as second place.  This young couple lit up the dance floor with their Charleston to Bills.

All eyes were now on Brendan who had the envelope containing the winner’s names.

By now fingernails were being bitten and people were at the edge of their seats.

The roof nearly lifted off the big top when he called out Brenton Dewick and Amy Cummins as the Winners of Strictly for 2018. The popular couple did a jive to the Olli Murs song Dance with Me Tonight. After much hugging and congratulating the couple were presented with their prize of a beautiful piece of Galway crystal specially engraved for the event. The moment we had all been waiting for was here - an encore of the winning dance. Surrounded by their new friends the couple got ready to perform their routine again. Their jukebox came to life and off they went and it was as flawless as the first time. They almost brought the tent down.

But this was not the end of the night. As the dance floor filled with well-wishers the DJ got to work and people danced the night away. It was a late one for some with the birdsong keeping them company on the walk home.

Nights like Friday are unique and that’s why we must enjoy them and make the most of them when they come along.

Thanks and well done to all at Arravale Rovers for putting on such a super event. Continued success to the club and don’t forget Keep Dancing. Rovers Abu.