Hollywood comes to Cahir: movie magic as A-List stars touch down in Tipperary 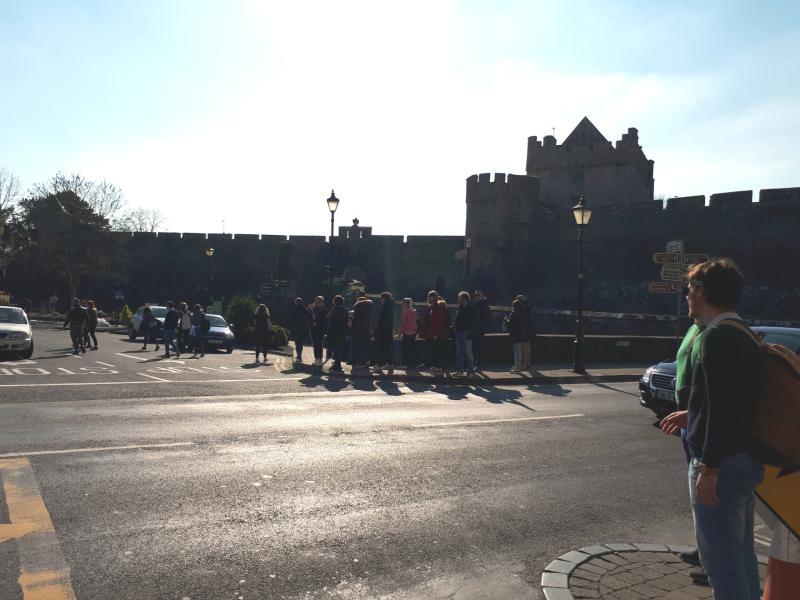 Cahir Castle has cemented its status as one of the top film locations in the country after a host of A-listers jetted into the premier county to film scenes for a new Hollywood blockbuster this week.

The castle, which has played host to some of the biggest names on the planet including Stanley Kubrick, Patrick Stewart and Helen Mirren, was the location for the latest retelling of new ‘epic fantasy film’ The Green Knight, starring Dev Patel, Alicia Vikander and Barry Keoghan.

The medieval blockbuster, which is slated for release in 2020, is a fantasy re-telling of the story of Sir Gawain who embarks upon a quest to confront the titular Green Knight.

According to online reports, twenty-eight year old Patel will play the lead role of Sir Gawain, a knight of King Arthur’s Round Table.

Also among the strong cast is Harry Potter actor Ralph Ineson and Dublin born Barry Keoghan who received critical acclaim for his star making turn in 2017’s The Killing of a Sacred Deer opposite Nicole Kidman and Colin Farrell.

Principal photography for The Green Knight began last month while filming in Cahir Castle took place this Monday and Tuesday.

Trucks carrying the valuable set pieces, sound and lighting equipment arrived early on Wednesday morning last however it was business as usual at the castle despite rumblings of the soon-to-be Hollywood invasion.

Although tours were closed to the general public, pre-booked visits were honoured, meaning only a select few were allowed to view the goings on inside the castle walls as crew began constructing the medieval film set.

By Friday all loose stone from the gravel lined walkways inside the castle grounds had been removed and replaced by several tonnes of sand while props of bales of hay and straw were loaded over the bridge to add finishing touches to an already impressive set.

By Monday afternoon dozens of would be celeb spotters lined the streets of the town, eager to glimpse a famous face as reports emerged that Irish heartthrob Michael Fassbender was also in town to support his wife Vikander on set.

Local hotels in Cahir and Clonmel were reportedly booked out to accommodate the sheer volume of extras, crew and staff working on the fantasy feature.

“It’s not the first time we’ve had films at Cahir so it's nothing new to us here,” she said listing the likes of John Boorman's 1981 Excalibur, Stanley Kubrick's Barry Lyndon, The Tudors and Sky's Moonfleet among the past projects shot in the town.

“It’s very important because it’s drawing attention to the town and what we have here and there’s also an economic effect because of all the people working on the crews during the filming period,” she added.

Local councillor Andy Moloney said that despite the castle being off limits to tourists during filming, there was still plenty of other attractions for visitors, such as the Swiss Cottage, to enjoy.

"We became aware that a film would be shot in Cahir a few weeks ago but it had to be kept very hush hush. I remember when Excalibur was being filmed in the town when I was young and there was a great buzz about the place.”

"We've had many the top class actor pass through the castle over the years and although the closure of the castle is an inconvenience for tourists, we hope it will be a case of 'short term pain, long term gain' and help in the overall promotion of the town,” he said.

Cahir castle is expected to reopen to the public on Friday, April 5.