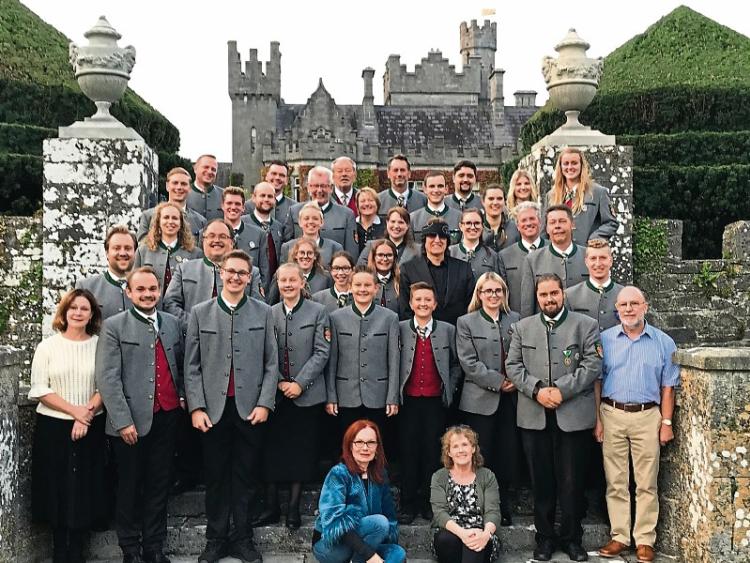 Above - Stadtkapelle Trofaiach, a traditional Austrian concert and marching band that performed at Gurteen Castle in Kilsheelan during their visit to Clonmel. Also included are members of the Clonmel Bianconi Town Twinning Committee

The group consisted of 33 people.

They performed at Old St. Mary’s church and thrilled the audience with a mixture of traditional marching and concert music, and beautiful singing. They were supported by the Murphy Sisters Traditional Irish Music group.

The proceeds of the concert were shared between the South East Radiotherapy Trust and Old St. Mary’s Restoration Fund.

Many thanks are extended to Canon Barbara Fryday for making this wonderful venue available.

On the same morning they marched up the town to St. Mary’s Church in Irishtown and performed at Mass. They were also welcomed to the Town Hall by Mayor Garret Ahearn.

As well as performing, the band did some touring and visited the Cliffs of Moher and the Burren, Midleton, Cobh, Dublin, the Rock of Cashel and Cahir Castle.

The highlight of their visit was an invitation to perform at Gurteen Castle, Kilsheelan, which is owned by the renowned Austrian visual artist Gottfried Helnwein and his wife Renate.

They performed in the castle’s magnificent surroundings for the Helnwein family and an invited audience.

The Clonmel Bianconi Twinning Committee are very grateful to Gottfried and Renate for the wonderful welcome and hospitality.

The band’s visit was part of the celebration of 20 years of twinning between Clonmel and Trofaiach.