Holycross Abbey Tour Guides are delighted to offer, once again, guided tours of the Abbey, its surrounds, and tours of Holycross and Ballycahill villages.

With all tourist destinations being closed due to the pandemic for the past few years, we in Holycross are thrilled to be back meeting and greeting people face to face once more.

When you visit Holycross Abbey, you may find it hard to believe that it is 840 years old this year. Founded in 1182 by Domhall Mór O’Briain, King of Thomond and given to the Cistercian Order by way of a charter signed by the Bishops of Lismore and Cashel and other dignitaries of the time. An excellent reproduction of that charter is on display in the Abbey today.

It was created by the renowned Irish calligrapher Tim O’Neill and gifted to William Hayes in 2013, who subsequently presented it to the Abbey for the benefit of visitors.

Alongside the reproduction, which is written in Latin, there is an English version of the text which states that Domhall Mór gave “forever” in the region of 8,000 acres, outlined in more than 20 townlands mentioned, and granted the land “in honour of Almighty God, The Blessed Virgin Mary, St. Benedict and the Holy Cross, for the welfare of my soul and the souls of my parents, in fields, in woods, in pastures, meadows, waters, fisheries, and mills, wholly, entirely, freely and peacefully to the monks of the Holycross in the presence of Gregory their Lord Abbot”. (Gregory was referred to as Abbot of Holycross Abbey at the time).

Photograph of the original charter, which is in the National Library in Dublin.

Also, this year Holycross Abbey Tour Guides Service head into their tenth year providing guided tours to locals, as well as national and international visitors to the village and Abbey.

The guides also provide an excellent schools program with different versions of the tour to suit all age groups from first-class to the fifth year. These school tours have proven to be very popular with groups from all over Munster.

Recent publicity across the USA

On St. Patrick’s Day this year, Holycross was featured on NBC television network as part of the advertising breaks during the live televising of the parade from New York City.

This was seen in millions of homes and was a great opportunity for Holycross to reach a market that surely will visit us if they travel to Ireland. To view it, please go to the video at the top of the page. 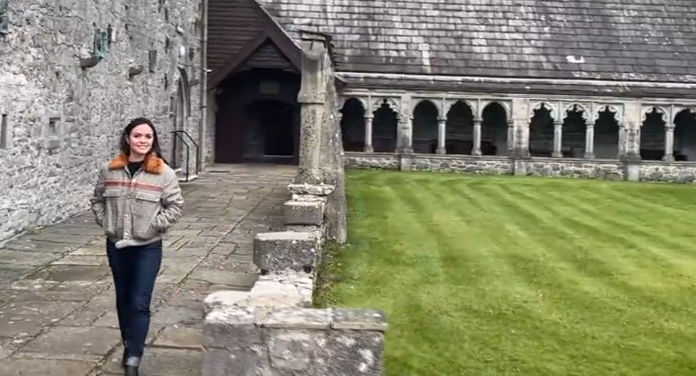 At the same time (on St. Patrick’s Day), there was another piece of great publicity for our Abbey, again in the USA but this time on the West Coast. Lindsay Myres, presenter of the very popular show ‘Access Hollywood’, presented clips from her tour of Ireland, and she included Holycross Abbey in that piece. Recorded om March 7th, Lindsay got the opportunity to experience the ‘Whispering Arch’ and, as she says herself, “had a moment” when she rang the bell in the Abbey.

Tipperary community raise over €2000 at Climb with Charlie walk

You can donate until April 10