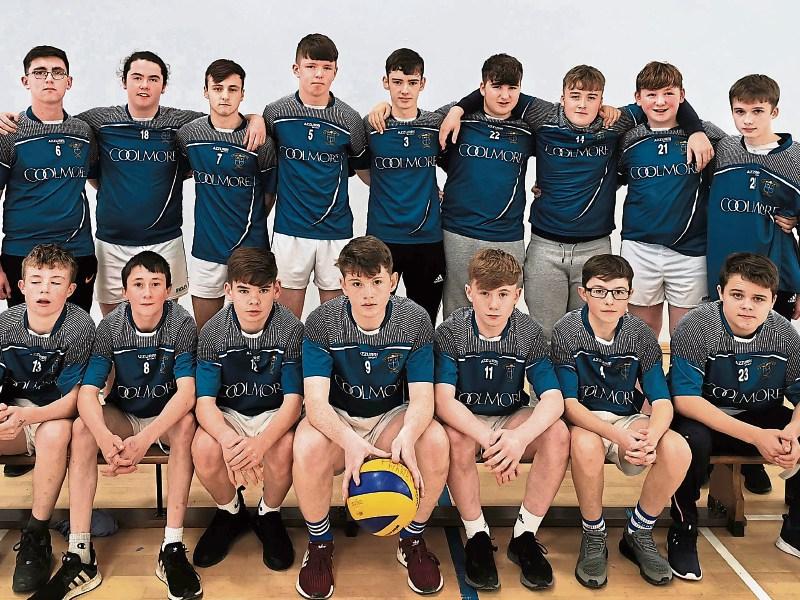 Patrician Presentation Secondary School Cadette Boys’ Volleyball team who will play against St Paul's CC of Waterford and Mary Immaculate in their next round to be played in Moyle Rovers Hall.

Fethard’s Patrician/Presentation Secondary School has been on a roll of late enjoying some sporting success indoors and outdoors in volleyball and ladies gaelic football.

Last week our senior boys' volleyball team travelled to Athlone I.T. to play teams from Roscommon Community College and Grange Community College from Donaghmede in Dublin in the first round of the national competition.

We emerged  comprehensive winners over Roscommon CC in two straight sets. The second match up was much closer needing to go to a third decider to overcome Grange.

Fethard’s next matches are in Mountrath on Monday next against Mountrath senior boys, a team from Dublin (tbc) and Coláiste an Eachréidh from Athenry.

Just two wins in these three matches would be enough to see Fethard reach the national final on December 12 in UCD.

Fethard won the first match against Coláiste De hInse two sets to nil with emptying the bench from our panel of 17. The second game was much closer with Patrician Presentation going down to the hosts Mountrath in a close set 25-19. Fethard recovered very well, however, and had a blistering start to the second set thanks to 12 unanswered serves from Charlie Hackett. Patrician Presentation went on to win the second set comfortably. From there out, Fethard dominated and took the tiebreak set comfortably on a score of 15 to 9.

We now face St Paul's CC of Waterford and Mary Immaculate in our next round on November 25. in Moyle Rovers.

There was great talent on show and commitment displayed by Fethard in this competition, after previously beating Presentation Secondary School Clonmel and receiving a walkover from Our Lady’s Secondary School Templemore.

We started strongly going into an early lead with points from Maggie Fitzgerald, Áine Connolly and Leah Coen. Leah found the back of St Anne’s net on the 10th minute; however, St Anne’s got more assertive in the match and begged back the lead with a goal and two points to leave Fethard leading at half time five points up at the break.

The second half was a very open with both teams finding the net on numerous occasions. Goals from Lucy Spillane and two from Leah Coen gave Patrician Presentation a comfortable lead however the St Anne’s grew in confidence and stuck the net themselves on a couple of occasion also. After a tit for tat second half Fethard began to gain a commanding lead with Patrician Presentation Secondary School Fethard winning in the finish with a final score line of Fethard 6-11 to St Anne’s 2-5