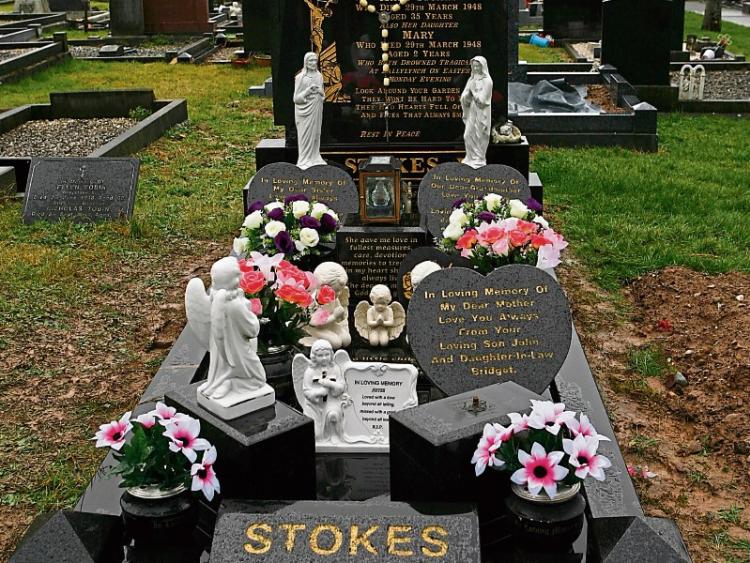 The Stokes family grave at St Mary's Cemetery in Carrick-on-Suir.

A Clonmel woman has accused Tipperary Co. Council of dealing with her family "insensitively" in a dispute over the reburial of the exhumed remains of her grandfather which have lain in a local undertakers for nine months.

Mary Stokes from Glenconnor, Clonmel said her family is very upset that her grandfather, John Stokes, has still not been reburied in St Mary's Cemetery in Carrick-on-Suir alongside his wife, daughter and unborn child killed in a drowning accident 70 years ago.

She believes the Council's attitude and treatment of her family in the dispute over the plot  where he should be reburied has been influenced by the fact they are members of the Travelling community.

"I feel there has been a total lack of respect shown towards us or willingness to want to get this resolved. I feel if we were somebody else we would have been treated much more differently," she told The Nationalist.

The Nationalist first highlighted the dispute between the Stokes family and the Council in February but four months on Mary says they still face a wait of several more months to get her grandfather reburied.

After months of negotiations, Mary says the family has decided to accept the Council's latest proposals but she says they are not happy with the agreement reached and they are angry it took so long to reach this stage.  She says the whole affair has deeply distressed her elderly parents, particularly her father John, who witnessed the drowning of his pregnant mother Mary and 23 month old sister Mary in the River Suir in Carrick-on-Suir in 1948.

Her grandfather died in 1967 and it was his wish to be buried beside his wife, daughter and unborn child in St Mary's Cemetery. However, he was buried in Kildare where he resided at the time of his death.

Mary Stokes said her dad, also named John, wanted to fulfill this wish now that he is in old age. To this end, the family obtained an exhumation licence and her grandfather's remains were exhumed from a cemetery in Kildare town on September 12 last year.

Two days later the reburial ceremony at Carrick-on-Suir's St Mary's Cemetery, however, was cancelled just an hour before it was to take place after the grave diggers found skeletal remains in what was meant to be an empty plot beside the Stokes family grave at St Mary's Cemetery.

The family had purchased this "vacant" plot after being advised by the Council they couldn't  do the reburial in the original family plot as it was deemed to be full. The Council's policy is to allow only two burials per plot at St Mary's because of the ground water level in the cemetery.

When skeletal remains were unexpectedly found in the newly opened plot, the Council contacted the Gardai and State Pathologist and forensic anthropologist Laureen Buckley carried out a visual examination of the plot and the bones found there. She also examined the position of the Stokes family grave in relation to other plots in other rows in the graveyard.

The anthropologist concluded the bones were consistent with the remains being those of Mary Stokes. Remains belonging to a child were subsequently found in the plot after she left the site and she concluded this was in keeping with her assessment that this was where Mary and her daughter were buried.

The Council proposed the reburial of Mr Stokes' remains should go ahead in this plot but the Stokes family had concerns over the identity of the remains found there and, through their solicitor, they requested the Council last October to arrange for the remains found in the "vacant" plot to be DNA tested.

The response they received from Carrick-on-Suir Municipal District Administrator Martin Nolan didn't answer their request but advised them they would need an exhumation licence in order to carry out DNA testing and no assurance could be given that it would be granted. He also informed them the Council was satisfied the remains found in the plot were those of the late Mary Stokes. He contended the Stokes family headstone was not in the correct place over her plot.

The Stokes family dispute the Council's contention that their family headstone was not placed correctly over her plot. Mary says her father firmly believes his family members lie underneath the family headstone.

The family want the Council to re-open their family grave and carry out DNA testing of any skeletal remains found there.

When The Nationalist first reported on the issue in late February, the Council had proposed to rebury Mr Stokes' remains in a new plot in the "currently active part" of the graveyard, and that the remains of his wife and child should be exhumed and reburied with him. The Council suggested the family could commission DNA testing when the remains were exhumed.

The family rejected this offer because for sentimental reasons they were not happy to move their deceased loved ones to another part of the cemetery. Her father had purchased this grave plot and her family had visited it for 70 years.

Negotiations between the Council and family's solicitor dragged on for a further two months. On April 24, the Council came up with a further offer, which their solicitor considered to be a "considerable shift" from its previous position.

Mary Stokes said they have agreed reluctantly to accept the Council's latest offer. They have been advised that taking the matter to court would further prolong their wait to rebury her grandfather by possibly years.

Under the agreement, the Council is to facilitate the exhumation of the skeletal remains found in the plot beside the existing family grave and it has no objection to the family carrying out DNA testing on them.

If the DNA tests find that the remains were those of the late Mary Stokes and her daughter, the Council proposes it will rebury them in that plot along with the remains of her husband. The Council has also agreed to waive their fees for the reburial.

The Council, however, has refused the family's request to re-open their own family grave. In correspondence the Council sent the Stoke family, it explained that it believes the remains of another family lie there and it's of the view that opening the grave would cause "unnecessary distress" to that family.

But the Council said it would "reconsider" its position on this matter if it could be shown "beyond doubt" that the remains found in the plot beside the family grave last September were not those of the late Mary Stokes.

Mary Stokes said she and her family are unhappy the Council is still refusing to allow them re-open their own family grave. She points out that a member of their family was buried there in the 1960s.

She said her family has always been willing to work with the Council to resolve this matter and they are deeply upset it has taken nine months to reach this stage.

She points out they are still facing several more months wait to arrange the exhumation licence and DNA testing and receive the results of those tests before making the decision where to rebury their grandfather.

"Our solicitor has advised us to accept the offer but we are not happy about it. We feel we have been backed into a corner by Tipperary Co. Council and have no other option but to accept the offer on the table. It's purely out of desperation to try put an end to this nightmare for the sake of my parents' mental and physical health and well being."

"For my grandfather's remains to be left in the mortuary for this length of time is totally inhumane and shows a total lack of respect on Tipperary Co. Council's behalf for my family and my deceased grandfather," Mary continued.

She said the situation has been overwhelmingly upsetting and stressful for her elderly parents.

Her family celebrated a Mass at O'Donoghue's Funeral Home in Clonmel where her grandfather's remains lie on June 10 to mark the anniversary of his death. "I can't describe the distress and anger that was felt by all family members looking at the hurt and pain my father is going through," she said.

The family are currently liaising with their solicitor and with O'Donoghue's Undertakers to arrange the exhumation licence and DNA testing. They hope it can be organised as speedily as possible.

Tipperary Co. Council Director of Services for the Carrick-on-Suir Municipal District Pat Slattery said the Council didn't wish to comment on Mary Stokes' criticism of its handling of the dispute with her family. He insisted the Council was doing everything it could to resolve the matter.

This report along with an additional report outlining why the Stokes family want DNA tests carried out on the remains found in the plot beside their family grave are printed in this week's edition of The Nationalist now in shops.