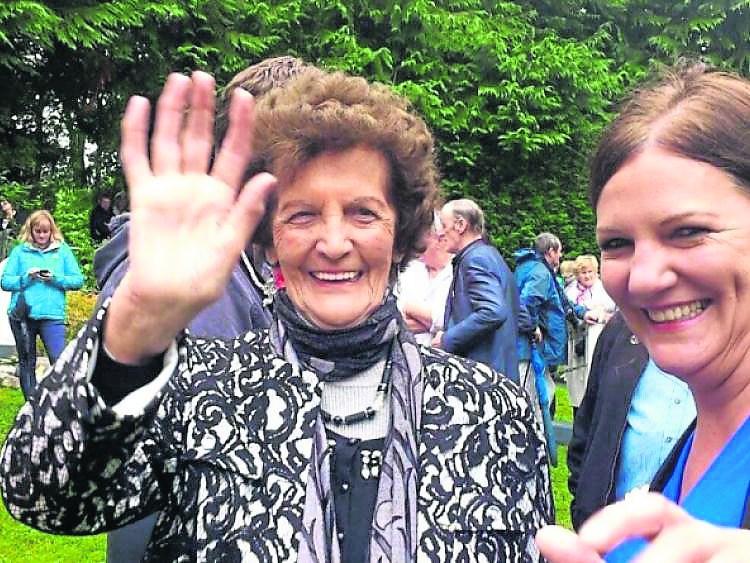 Philomena Lee, on a visit to Tipperary - her story forms the basis of the Oscar nominated movie 'Philomena', which tells the story of Sean Ross Abbey near Roscrea

Excavations to unearth the suspected buried remains of up to 269 children have begun at Sean Ross Abbey, Roscrea. The excavation at the former mother and baby home was commissioned to determine the true number of remains which lie in its ‘Angels Plot’.

The dig at the Sean Ross Abbey, near Roscrea, began on Monday morning following directions from the Commission of Investigation into Mother and Baby Homes.

The Commission was established in 2015, after investigations discovered evidence of the remains of nearly 800 babies believed to be buried in a former septic tank on the grounds of the Tuam mother and baby home.

The Sean Ross Abbey home was the inspiration for the Oscar-nominated film Philomena, which depicts the true story of Philomena Lee’s baby son being sent for adoption in the United States. The work will involved removing some of human remains for analysis to determine the ages of those who died there, and the year of their deaths.

It’s understood the birth certs of up to  269 children form the basis for the examination, however the real figure could be much higher due to the uncertainty surrounding paperwork and records from that era.

In 2012, the Tipperary Star reported on one survivor’s campaign to preserve the ‘angels plot’ for future generations, and that all people with an interest in the graves should be given guaranteed 24-hour access toSean Ross Abbey, including the provision that any subsequent sales would also include such conditions.

The current probe is taking place on consecrated grounds, with the full support of the Sisters of the Sacred Hearts of Jesus and Mary. The religious order has said it  continues to deal directly with the Commission “on all matters”

Sean Ross Abbey was in operation from the 1930s to the 1970s and was run by the same order that ran the Bessborough mother and baby home in Cork.

The Cabinet recently granted a one-year extension to the commission to publish its final report on the subject of mother and baby homes, which was due to be finished next month. It will now be due in February 2020.

A number of survivors' groups recently expressed anger that the commission had requested a second extension.

It is understood the delay is due to the commission receiving a large amount of new data last month, mainly from the Department of Health, which now needs to be analysed, as well as other material.

Minister for Children Katherine Zappone said: “I know this is not the news which survivors and their families wanted to hear. I know they will be disappointed by this development but the commission is confident that with this additional time it can comprehensively report on its terms of reference.”