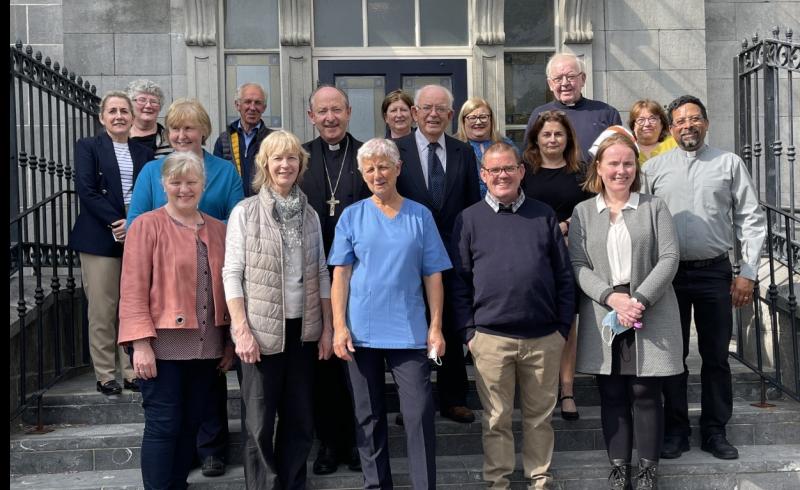 On Thursday, April 28 a ceremony to deconsecrate the church on the grounds of St Luke’s Hospital, Clonmel was performed by Most Reverend Alphonsus Cullinan, Bishop of Waterford and Lismore.

St Luke’s Hospital has a long history not only in Clonmel but for many years throughout the whole of county Tipperary.
The first patients were admitted to the hospital on January 16 in 1835 and since its opening, St Luke’s was a constant on the landscape of the county providing care and treatment for people with mental illness.
Many changes in the models of care and Government policy led to the closure of large psychiatric hospitals such as St Luke’s Hospital. The last patients were discharged from St Luke’s Hospital on July 26 in 2012.
The church was not erected until 1890 some 55 years after the opening of the hospital. The delay in building the church could represent the present when delays in building projects are rarely progressed with any urgency.
In 1871 the Resident Medical Superintendent Dr William Garner, urged the Board of Governors of the Clonmel Asylum to erect a chapel as the accommodation at present could be set down as “nil”. A year later the governors decided that the construction of a chapel would have to be postponed until the tunnel linking the main hospital with the old Clonmel Workhouse in Upper Irishtown was completed.
However, after completion of the tunnel, it was many years before anything definite was done about the chapel.
In December 1886, Rev Timothy O’Connell, Parish Priest of St Mary’s Parish and chaplain to the asylum wrote to the governors of “the necessity that you should provide a suitable and becoming place of worship for the Catholic inmates of the house.” The governors at their meeting of January 1887 agreed to go ahead with the erection of a Roman Catholic chapel and decided to change the original site to the site adjoining the tunnel as the most suitable.
Finally, in September 1888 the board accepted a tender from Mr P Dwyer, Clonmel in the sum of £2,134/3/3 and the construction commenced.
However, in December 1889 the building of the chapel was abandoned by the contractor.
In April 1890 the work on finishing the building was undertaken by the Board of Control and the work was completed in a couple of months.
On a visit in October 1890, the Inspectors of Asylums were shown the new chapel and stated “we think the building reflects the greatest credit on the architect and we are sure that the generous sense which the governors have shown of the importance of so handsome a place of worship will be amply repaid by the increased happiness and contentment of the patients”.
From the Chaplains’ books we find that “on last Sunday 175 men and 177 women attended Mass”.
It had taken a period of almost 20 years to provide the chapel.
Roman Catholic religious services were provided in the hospital by St Mary’s Parish Irishtown, Clonmel up to 1979 when Fr Crispin Keating of the Franciscan community in Clonmel signed an agreement to provide chaplaincy services at St Luke’s Hospital.
The Franciscans’ chaplaincy services were continued in the hospital church until its closure.
CEREMONY
The ceremony held in the church on April 28, 2022 was attended by current and former staff members. The local clergy were represented by Rev Canon Billy Meehan, St Mary’s, Clonmel, Fr John Treacy, St Peter and Pauls, Clonmel,Fr Michael Hegarty, St Olivers, Clonmel and Fr James Hassan, Franciscan Friary, Clonmel.
The introduction and opening prayers were delivered by the Bishop Most Rev Alphonsus Cullinan. The first and second readings were by Eileen Nagle and Noreen Murphy.
Deacon Lazarus Gidolf read the gospel.
Following the homily by the Bishop, the prayers of the people were read by Eamonn Lonergan, Margaret Bergin, Mary Shinnick and Anne Egan.
Fr John Treacy invited Bishop Most Rev Alphonsus Cullinan to read the Declaration of Deconsecration.