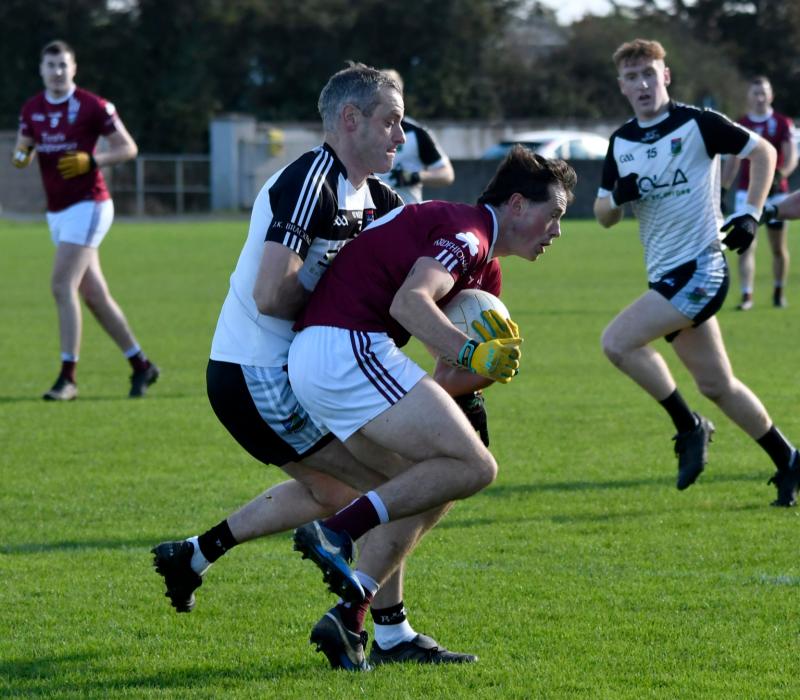 This game played in Golden on Sunday afternoon proved to be a close affair which saw JK Brackens taking the spoils to advance in this year’s County Championship.
Ardfinnan started well and attacked the well organised JK Brackens for a period, however they were unable to break down the packed defence, before Paddy Cadell got on the end of a fast Brackens break and kicked the first score of the game after four minutes.
Ardfinnan replied well with a fisted score from Michael O’Sullivan on five minutes before Ardfinnan went ahead with a Billy Hewitt point from play. In the 11th minute JK Brackens scored a goal after Eanna McBride got on the end of a drive from the influential Cathal Scully to shoot a goal past Michael Goonan.
Ardfinnan responded well with a point from a free from Michael Barlow before JK Brackens scored their own free with Jack Kennedy converting from close range. Ardfinnans Luke O’Brien scored an important point to keep the pressure on Brackens before Jack Kennedy was again on hand to score another point from a free to extend their lead. A superb Billy Hewitt point with his left leg was quickly followed by a long range point from Ardfinnan’s Sean Nagle.
However, JK Brackens finished the half the stronger with two unanswered points from full forward Jack Kennedy.
This left the half time score Ardfinnan 0-06 to JK Brackens 1-05.
JK Brackens started the second half really strongly and used the wind to great effect scoring three unanswered points, one from Jordan Moloney and a brace from the lively Jack Kennedy. The hardworking Billy Hewitt converted a free for Ardfinnan on 38 minutes before Darragh O’Leary sliced through the Brackens defence to score a superb goal to put the minimum between the teams again after 43 minutes. It did not take JK Brackens long to respond as a well worked move up the field saw the dangerous Eanna McBride strike again with his second goal to put some light between the two sides. After the water break JK Brackens substitute Shane Doyle scored an excellent long range point before Ardfinnans Gerry Cronin countered with a good point for Ardfinnan.
On 55 minutes Ardfinnan’s Gavin Whelan was denied a goal chance before Jack Kennedy pointed another free for JK Brackens.
On 62 minutes Gavin Whelan made no mistake this time and blasted past Kuba Beben in the Brackens goal to make it a two point game.
Ardfinnan pressed hard to the end and finished strongly but the Brackens defence kept them at bay before the referee Seanie Peters blew the full time whistle.
JK Brackens will feel relieved to have come out on top of this close affair and Ardfinnan will rue a few missed chances which could have changed the outcome of the game.
The final score was Ardfinnan 2-8 and JK Brackens 2-10, the South Tipp side left to rue what might have been.
JK Brackens advance to the Semi Finals and will cause problems for whoever they are drawn against while Ardfinnan have shown signs of improvement under Manager Tom McGlinchey and will go into 2022 with a lot to build on.
TEAMS AND SCORERS
Ardfinnan Team:
Michael Goonan, Robert Condon, Jonathan Ryan, John Condon, Michael O’Sullivan, Sean Nagle, Colm O’Shaughnessy, Darragh O’Leary, Gerry Cronin, Luke O’Brien, Gavin Whelan, Billy Hewitt, Andrew Browne, Michael Barlow, Jason Coffey. Subs: Aaron Lonergan for Michael O’Sullivan, Colin O’Gorman for Luke O’Brien and James O’Mahoney John Condon.
Scorers: Billy Hewitt (0-3 1F), Luke O Brien (0-01) Michael Barlow (0-1, 1F), Gavin Whelan (1-00) Gerry Cronin (0-01) Darragh O Leary (1-00) Sean Nagle (0-1) Michael O’Sullivan (0-1)
JK Brackens Team:
Kuba Beben, Tom Murphy, Lorcan Egan, Martin Delaney, Adrian Burke, Neil Quinlan, Jorden Moloney, Paddy Cadell, David O Shea, Shane Bourke, Cathal Scully, Conor Cadell, Dean McEnroe, Jack Kennedy, Eanna McBride. Subs used: Shane Doyle for David O Shea, Lyndon Fairbrother for Shane Bourke, Shane Scully for Jack Kennedy.
Scorers: Jack Kennedy (0-7, 5F), Eanna McBride (2-0), Paddy Cadell (0-1), Jordan Moloney (0-1), Shane Doyle (0-1).
Referee: Seanie Peters (Aherlow).