All to easy for Commercials v Cahir in Tipperary Senior Championship 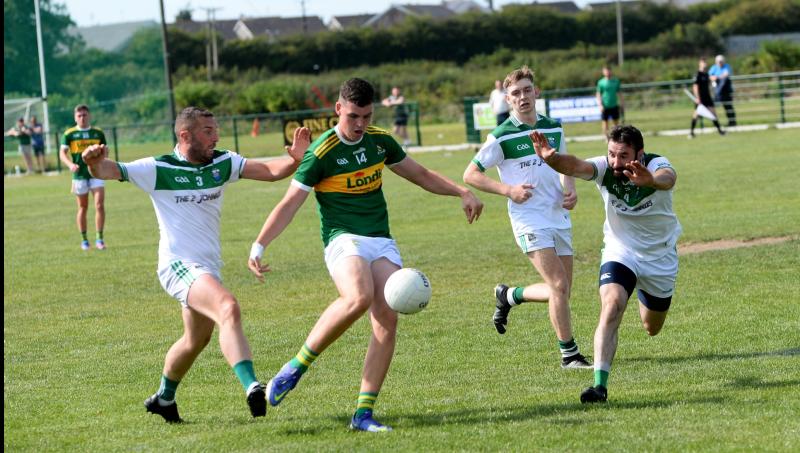 Clonmel Commercials’ full-forward Darragh O'Connor gets his shot off despite the best efforts of Gerard Halley (Cahir) with an attempted block. Pic: Michael Boland

Clonmel Commercials did little more than go through the motions to make it three wins from three in Group 1 of the FBD Insurance County SFC with a huge 16 points win, 2-22 to 0-12 over Cahir at Leahy Park, Cashel on Sunday.
In a dead rubber, Commercials were already assured of progressing from the group with Cahir facing a relegation battle and it showed in a total miss-match.
Commercials could afford to start without regulars Seamus Kennedy, Jason Lonergan, Ross Peters and Colman Kennedy; brought their goalkeeper outfield for the second half when he scored a goal; and finished the game with thirteen players as they failed to replace both Donal Lynch and Eoin McCarthy in the closing stages as they lessened the impact on available players for their high-flying intermediate side.
It was a chastening experience for Cahir, three points down in three minutes, 0-9 to no score in arrears midway through the half; and thirteen behind at the break, 0-16 to 0-3.
A hopeless situation became an impossible one three minutes into the second half when goals from the brilliant Jack Kennedy, and goalkeeper- turned- forward Michael O’Reilly, made an already one-sided game a foregone conclusion.
But the hope for Cahir as they battle to retain senior status is that they never gave up the battle. With Ger Hally sound in defence, as well as popping up for two vital points, Eoin Wyse and Eddie Kendrick busy around midfield, and Jack Buckley and Jake Kiely posing a threat upfront, they offered a challenge to Commercials but their finishing lacked composure.
In the first half alone, Jake Kiely dropped a ball short into keeper Michael O’Reilly’s hands, Eoin Wyse saw a shot come back off the upright and Niall McKenna had a glorious goal opportunity but his shot cannoned off the post and was cleared.
Not surprisingly, a Clonmel side with title aspirations still very much alive, were much more economical with their chances. With Enda Dunphy, Tadgh Condon, Rory O’Dowd, Eoin McCarthy and Peter McGarry coming into the side for the more established players missing, there was an urgency to their play from the start.
Jack Kennedy was unplayable in the first quarter, pointing a free in the first minute after brother Conal was fouled, and then adding three more from play and one from a 45. Kevin Fahey and Aldo Matassa were equally impressive, and along with Peter McGarry each hitting a point from play with a Sean O’Connor free giving Commercials a 0-9 to no score lead after sixteen minutes.
Sean O’Connor looked certain to score a goal in the 11th minute but Cahir ‘keeper Aaron Wall pulled off a brilliant save to deny him.

Following some impressive play, Cahir pressure paid off in the 16th minute when Jack Buckley had their first point from a free and he went on to score two more before the break, one from another free and a great score play from a Jake Kiely pass.
However, Commercials were unrelenting to pull away to a 13-points half time lead, Jack Kennedy adding a point when he might have gone for goal, Matassa and O’Connor hitting two each and Kevin Fahey and Cian Smith with one each.
With the two points, and third group win on the trot, secured, Commercials could afford to shuffle the pack at half time, with Niall Kelly and Donal Lynch coming on for Rory O’Dowd and Cian Smith. Kelly went into goal with Michael O’Reilly moving to the far end of the pitch in the full forward line.
And it didn’t take long for him to make his mark. After sixty seconds his first pass was to Sean O’Connor who was pulled down in the square for a penalty. Jack Kennedy’s spot-kick was brilliantly saved by Aaron Wall but Kennedy gathered the rebound to shoot to the net.
Two minutes later Conal Kennedy sent a ball across goal to the unmarked O’Reilly who finished to the net in style to make it 2-16 to 0-3 with twenty-seven difficult minutes still to go for Cahir.
Commercials may have eased off on the throttle, or Cahir picked up the pace, but Cahir outscored the winners 0-3 to 0-1 over the next seven minutes, McKenna, Eanna Heffernan and Hally on target, with Kevin Fahey replying for Commercials from a pin-point O’Reilly pass.
However, that brief surge was never going to change the final result, even if Cahir again outscored Commercials six to four in the final quarter.
But the Clonmel side finishing the game with thirteen players may have contributed to that. Donal Lynch, who came on as a sub at half time, limped off with a leg injury while Eoin McCarthy also made way. Commercials opted not to replace either as they had already dipped heavily into their reserves of intermediate players and didn’t want to make any more ineligible for that campaign.
Sean O’Connor scored four of their last five points, two from frees, while Jamie Peters burst forward from defence to finish the scoring with a fine point. Without ever troubling the Commercials lead, Cahir battled to the end and the final quarter was productive, and perhaps an indication of what they have to offer in big games still to come, with four points from Buckley, three from frees, and one each from Hally and McKenna.
Clonmel Commercials – Michael O’Reilly 1-0; Enda Dunphy, Ciaran Cannon, Jamie Peters 0-1; Rory O’Dowd, Kevin Fahey 0-3; Tadgh Condon, Jack Kennedy 1-6, 0-1 free, 0-1 ’45; Padraic Looram, Eoin McCarthy, Aldo Matassa 0-3; Conal Kennedy, Cian Smith 0-1; Sean O’Connor 0-7, 0-4 frees; Peter McGarry 0-1.
Subs – Niall Kelly for Rory O’Dowd, Donal Lynch for Cian Smith.
Cahir – Aaron Wall, Sean Leahy, Robbie Costigan, Nicholas Reidy, Ciaran Condon, Ger Hally 0-2; Eanna Heffernan 0-1; Eoin Wyse, Eddie Kendrick, Jake Kiely, Stephen Grogan, Oisin Maher, Jack Buckley 0-7, 0-6 frees; Niall McKenna 0-2; Sean O’Connor.
Subs – Kieran O’Dwyer for Nicholas Reidy, Eoghan Kelly for Stephen Grogan, Stephen Grogan for Ciaran Condon, Ciaran Condon for Jake Kiely.
Referee – Martin Doyle (Ardfinnan).