Ardfinnan beaten by a point in quarter-final in Clonmel 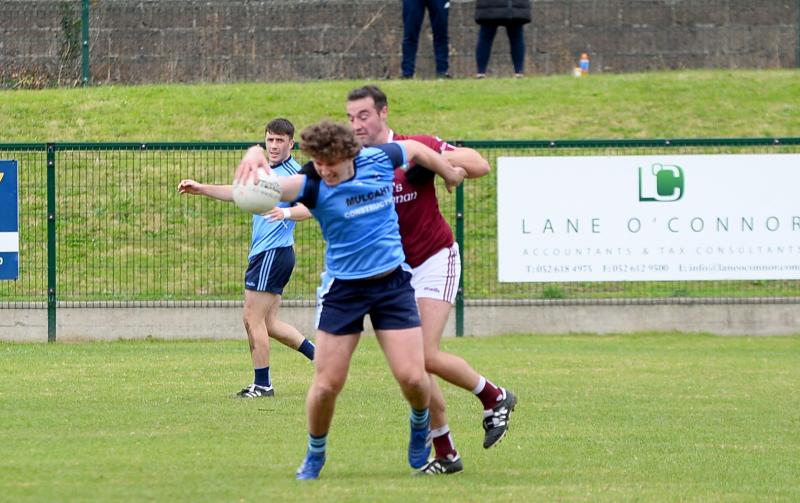 A matter of inches secured Moyle Rovers a place in the County Senior Football Championship semi-final and knocked a gutted Ardfinnan out of contention.
In a fiercely-contested quarter final played in Clonmel on Sunday, Moyle Rovers led by a point, 0-12 to 0-11, with seven minutes of injury time played. Ardfinnan had their chances for an equaliser in the closing minutes but couldn’t get their shot off, until a flowing move from their own half found Michael Barlow in possession and with a clear sight of goal.
Barlow had been immense throughout, always probing for openings and having already kicked eight points, six from frees and two marks. The Village team would have wanted no one else to have the opportunity to force extra time but his curling shot sailed inches wide.
It was heartbreak for Barlow and Ardfinnan, as they least they deserved was extra time. They looked likely winners when they raced into a five-points lead early in the second half. But in a game that was high on industry but low on quality, Moyle Rovers deserve tremendous credit for battling back.
The bench played a key role in their victory. Danny Owens came on late in the first half and kicked two points. Then Cillian Crowe was introduced in the second and kick-started the Rovers revival in blistering style, hitting two points in two minutes and then winning a free for a third that was pointed by Liam Boland.
The game wasn’t overly physical but still very competitive and became stop-start, with a series of injuries to players. One of the key ones was the early withdrawal of key Ardfinnan forward Billy Hewitt midway through the first half. His loss was significant for an Ardfinnan side that struggled to get scores.
Rovers also lost Diarmuid Foley later in the half and it could have been worse for them when captain Liam Boland had to leave the field for treatment to a head injury just before half-time. But a bandaged Boland returned for the second half and played a major part in the win.
A Barlow free gave Ardfinnan an early lead and then both he and Gavin Whelan were wide from play before Liam Boland kicked the equaliser in the fifth minute. A Barlow free restored the lead in the eighth minute.
It took the introduction of Danny Owens for the injured Diarmuid Foley to tie the scores again but Darragh O’Leary hit an immediate reply to restore the Ardfinnan lead at 0-3 to 0-2 after 24 minutes of less than inspiring football.
A Barlow free pushed the lead out to two, but two in a row from Liam Boland and Danny Owens tied the sides again. However, two points deep into injury time, both from Michael Barlow, a mark and a free, gave Ardfinnan a deserved two points advantage at the break, 0-6 to 0-4.
It didn’t take Ardfinnan long to build on that in the second half. They were solid at the back, with Jonathan Ryan, Sean Nagle and Colm O’Shaughnessy in top form, Gerry Cronin and Darragh O’Leary busy around midfield, and Michael Barlow leading the attack.
After Rian Quigley had missed an early chance for the Powerstown/Lisronagh side, Ardfinnan upped the pace and had Rovers in all sorts of trouble. First Darragh O’Leary found himself in space to curl over a beautiful point. Then Aaron Lonergan was fouled when pressing in on goal and Barlow pointed the free. And when Barlow pointed a mark it gave Ardfinnan a five points lead, 0-9 to 0-4, just five minutes into the half.

Liam Boland pointed a free in the ninth minute for their first score of the half, following a foul on Shane Foley, but Ardfinnan hit back three minutes later with a super point from Gerry Cronin that had been created by Colm O’Shaughnessy and Jason Coffey in a brilliant build-up.
Rovers were on the ropes and needed a spark to maintain their championship aspirations. And it came in spectacular fashion from substitute Cillian Crowe. Three times in the space of four minutes he raced through the Ardfinnan cover, pointing himself on the first two and winning a free on the third for Liam Boland to reduce the lead to two points.
Ardfinnan were now feeling the pressure, and Danny Owens pounced on a misplaced pass in midfield to send Stephen Quirke away to shoot a magnificent point. Quirke then missed a chance to kick the leveller but it wasn’t long coming when another careless Ardfinnan pass resulted in the concession of a free that Boland pointed.
Ardfinnan were struggling with their kickouts and one poorly- placed effort fell to Dara Ryan, who put Moyle Rovers ahead for the first time in the game with eight minutes remaining. But despite some wayward play, Ardfinnan lacked nothing in heart and determination and fought back to level again with another Barlow free.
However, almost immediately play swung to the other end of the field and Liam Boland showed the leadership his team needed to kick what was to prove the winning point in the 26th minute.
There were still eleven minutes to play as Ardfinnan tried to force the equaliser. Despite plenty of possession, they couldn’t create the opening for the shot until the final minute breakaway attack that found Michael Barlow unmarked and with a clear sight of the posts.
Agonisingly, however, it tailed off past the far upright and there was no time to launch another attack. It was a cruel defeat for Ardfinnan, but Moyle Rovers know they have to play better to challenge for the ultimate prize.
Moyle Rovers: Ciaran Kenrick, Aidan Foley, Morgan Irwin, Cathal McKeown, Paddy Morrissey, Jack Harney, Diarmuid Mulcahy, Luke Boland, Rory Collins, Dara Ryan 0-1; Stephen Quirke 0-1; Diarmuid Foley, Shane Foley, Liam Boland 0-6, 3 frees; Rian Quigley.
Subs: David McGrath for Rian Quigley, Danny Owens 0-2 for Diarmuid Foley, Cillian Crowe 0-2 for Cathal McKeown.
Ardfinnan: Michael Goonan, Jack O’Neill, Jonathan Ryan, Robert Condon, Aaron Lonergan, Sean Nagle, Colm O’Shaughnessy, Gerry Cronin 0-1; Darragh O’Leary 0-2; Luke O’Brien, Michael Barlow 0-8, 6 frees, 2 marks; Gavin Whelan, Oisin Ryan, Billy Hewitt, Jason Coffey.
Subs: Andrew Browne for Billy Hewitt, Gideon Buchwald for Luke O’Brien.
Referee: Sean Everard (Moyne/Templetuohy).