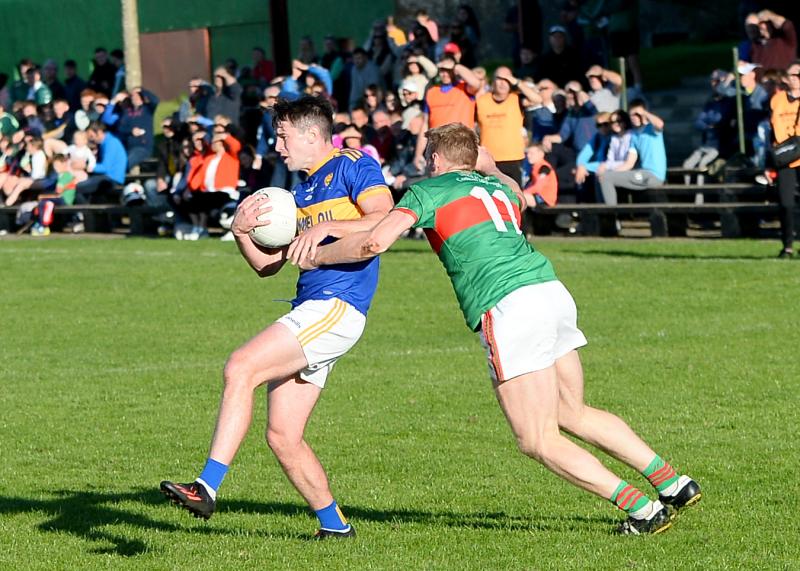 For the second year in a row Kilsheelan/Kilcash provided Loughmore/Castleiney with a stern test in the FBD Insurance County Senior Football Championship quarter-final.
However, the result of this evening's game at Leahy Park in Cashel was the same as in 2021, with the champions doing just enough to advance to the last four.
Twelve months ago Loughmore had only a point to spare over their south Tipperary opponents. This time the margin was two, but it would have been no surprise had extra-time been required to separate them.
A draw at the end of normal time appeared a possibility when a converted free from Kilsheelan's Barry Kehoe levelled the scores for the first time with seven minutes remaining.
However, Loughmore eventually managed to grind out the win in typical style. Substitute Darragh McCahey restored their slender lead in the 54th minute and four minutes later Noel McGrath skilfully curled a shot between the posts to offer them further breathing space.
Barry Kehoe was off target from a couple of frees as Kilsheelan rallied, while Darragh McCahey missed a chance for a point at the other end. But the late goal or points that Kilsheelan/Kilcash needed to retrieve the situation never looked like materialising.

Loughmore will be pleased to have passed such a tough examination as they march on in the defence of their football and hurling titles. Noel McGrath, Liam McGrath, Joey Hennessy, Brian McGrath, Sean O'Connell and John Ryan, who scored a superb goal that proved crucial, were all in inspired form, although they'll be concerned about the injury to Willie Eviston that forced the captain off the field in the 24th minute.
Ryan's goal, when he accepted Liam McGrath's pass and unleashed a piledriver that threatened to tear the net from its rigging, completed Loughmore's recovery from a very slow start.
Kilsheelan/Kilcash flew out of the traps, hunting in packs and crowding out their opponents as they played the title holders at their own game. In a game played in ideal conditions, Barry Kehoe gave them the lead from a free after 38 seconds.
They built on their lead with further points from Mark Kehoe, another Barry Kehoe free and a point from Sean Martin, which meant they led by four points to no score after five minutes.
However, despite that great start for Kilsheelan, Loughmore soon showed all the hallmarks of champions and within eight minutes they were ahead.
Conor Ryan's free opened their account, with Liam McGrath and Sean O'Connell, with a fine effort kicked from distance, drawing them closer. When John Ryan's goal arrived in the 13th minute to make it 1-3 to 0-4 it was a case of unlucky 13 for Kilsheelan, as they were never in front again.
Kilsheelan's response to that flurry of Loughmore scores came in the shape of goalie Evan Comerford's accurate 45, with Liam McGrath hitting back with a Loughmore point.
Mark Kehoe converted another free in the 25th minute but Loughmore had the final say in the half with a Conor Ryan point in added time, which meant they led at the midway stage by 1-5 to 0-6.
Both sides lost influential players in the latter stages of the opening half - while Willie Eviston's injury-enforced departure was permanent, Bill Maher was only missing for ten minutes, after he picked up a black card.
What had been an open and well-contested encounter was no less engaging in the second half, as Kilsheelan's Mark Kehoe and Barry Kehoe (from a free) and Loughmore's Aidan McGrath (with a brilliantly-executed shot) and Conor McGrath traded points.
Kilsheelan were up in arms when a Liam McGrath delivery that appeared to have gone wide was given as a point. But they didn't allow that to distract them, as scores from Barry Kehoe and Jamie Roche edged them closer.
Barry Kehoe's equalising point from a free set up a grandstand finale but Loughmore showed their mettle to shade the verdict in the tense closing stages.
Kilsheelan will be very disappointed to have left Cashel empty-handed despite having invested so much effort in their attempt to cause an upset. Captain Daire Brennan and Mark Kehoe were immense throughout and had a strong supporting cast in Billy O'Connor, Cathal Kelly, Bill Maher, Mark Stokes, Barry Kehoe and Paul Maher.
However, not for the first time their championship aspirations foundered on the rock that is Loughmore/Castleiney.