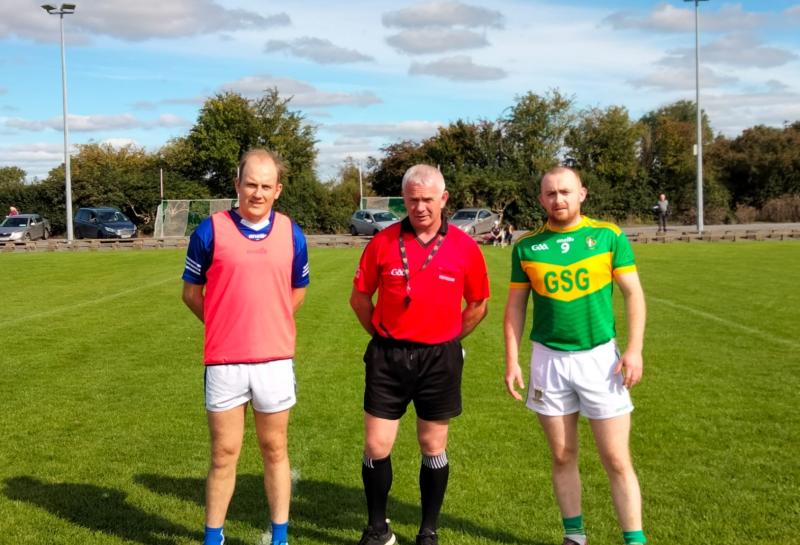 Eire Og Annacarty/Donohill retained their senior football status when they overcame Aherlow in the quarter-final of the Tom Cusack Cup at Golden on Saturday afternoon.
This game also doubled as a relegation semi-final, and while it never reached championship pitch it was an exciting game, with Eire Og just shading it in extra-time.
Aherlow were looking the likely winners as the game headed towards the final ten minutes of normal time. However a late surge by Eire Og, which included two goals from Connie Bradshaw, brought the contest to extra- time, following a Paidi O’Dwyer point from a free six minutes into injury time.
Extra time produced more of the same, with Aherlow edging ahead by the minimum, only to be hauled back again and Paul Devlin kicking the decisive point nine minutes into the second period of extra time to win the game for Eire Og by the minimum.
Thomas Hanly got the scoreboard ticking over when he converted a second minute free at the far end.
Paidi O’Dwyer then kicked the first of his five points three minutes later to tie up the contest. A second Paidi O’Dwyer point from play eased Eire Og to the front with ten minutes gone.
Thomas Hanly got the opening goal when he put a low shot past Darragh Mooney to give Aherlow a lead that they would retain until the 60th minute.
Donal O’Dwyer cut the deficit to the minimum with a well-taken point, before a Ray Hennessy goal at the quarter hour-mark put Aherlow firmly in control.
Eire Og, despite having their share of possession, were finding scores hard to come by, as their forwards in general seemed reluctant to have a go.
However, they finished out the half with two good scores, the first from Tom Fox and the second on the stroke of half-time from Paidi O’Dwyer, to leave the score at the break Aherlow 2-1, Eire Og Annacarty/Donohill 0-5.

Three minutes into the second half, Cian Mooney pulled one back for Eire Og, when he cut in from the sideline.
Michael Elligot kicked over two excellent points, either side of a similar score from Paudie Bradshaw. Bradshaw was coming more into the game, with attacking runs down the left side, but the Aherlow full back line was holding firm.
Darragh Mooney kicked a long-range free to cut the deficit to the minimum with ten minutes on the clock. At the other end, Aherlow kicked three in succession to go four up, 2-6 to 0-8, and with fifteen minutes of normal time remaining.
The goal that was required to bring Eire Og back into contention arrived in the 20th minute when Connie Bradshaw was first to react to a breaking ball, punching to the net at the far end.
Aherlow replied with points from Thomas Hanly and Mark Russell, who had been introduced as a substitute following a lay-off through injury.
Paudie Bradshaw and Thomas Hanly, from a placed ball, exchanged points as the clock headed towards injury time. Then Connie Bradshaw got in for his second major to level the game.
Four minutes into injury time, Thomas Hanly kicked his fifth point of the afternoon to ease Aherlow ahead by the minimum. Eire Og looked in trouble but in their last attack Paidi O’Dwyer, from a free, brought the sides level and sent the game to extra time.
For the first period of extra time, both sides had their chances from play and placed balls, but failed to add to their totals.
With half-time looming, Paidi O’Dwyer and Paudie Bradshaw eased Eire Og in front with two points. However Thomas Hanly pulled one back from a free to leave the minimum between the sides at the break.
The opening minute of the second period of extra time had the sides level for the fourth time, when top scorer Thomas Hanly kicked his seventh point.
With play moving from end to end, neither side was able to advance their position on the scoreboard and penalties looked a distinct possibility.
However Paul Devlin had the final say in this drama, as he popped up with the winning score one minute from time.
Eire Og’s senior football status was secured for another year and they also advance to the semi-final of the Tom Cusack Cup. Aherlow will now play Cahir in the relegation final, with the loser dropping down to intermediate for 2023.
Scorers: Eire Og Annacarty/Donohill: Connie Bradshaw (2-0), Paidi O’Dwyer (0-5, 2 frees), Paudie Bradshaw (0-3), Darragh Mooney (0-1 free), Cian Mooney (0-1), Donal O’Dwyer (0-1), Tom Fox (0-1), Paul Devlin (0-1).
Aherlow: Thomas Hanly (1-7, 0-4 frees), Michael Elligot (0-3), Ray Hennessy (1-0), Mark Russell (0-1), Lawrence Coskeran (0-1).
Eire Og Annacarty/Donohill: Darragh Mooney, Mickey Bradshaw, David Fox, Conor Devlin, Paudie Bradshaw, Brian Fox, Paul Devlin, Eoin Bradshaw, Dan Kelly, Paul Downey, Paidi O’Dwyer, Connie Bradshaw, Donal O’Dwyer, Conor O’Brien, Cian Mooney.
Subs: Tom Fox for Eoin Bradshaw (BS 18 mins), Tom Fox for Paul Devlin (BS 22 mins), Tom Fox for Eoin Bradshaw (HT), Ciaran Loughman for Conor Devlin (35 mins), Eoin Bradshaw for David Fox (40 mins), David Fox for Cian Mooney (57 mins) Darragh O’Brien for David Fox (63 mins).
Aherlow: Jack Whelton, Mark Hanly, Sean Mullins, Tom O’Donoghue, Lawrence Coskeran, Tadhg Carew, Stephen Moloney, Ray Hennessy, Ed O’Meara, Diarmaid Looby, Cathal Dillon, Darren Neville, Michael Elligot, Thomas Hanly, Liam Carew.
Subs: Mark Russell for Darren Neville (40 mins). Darragh O’Brien for Tom O’Donoghue (45 mins), Jack O’Halloran (ET), Ben Carey (ET), Shane Russell (ET).
Referee: Johnny Butler (Upperchurch/Drombane).