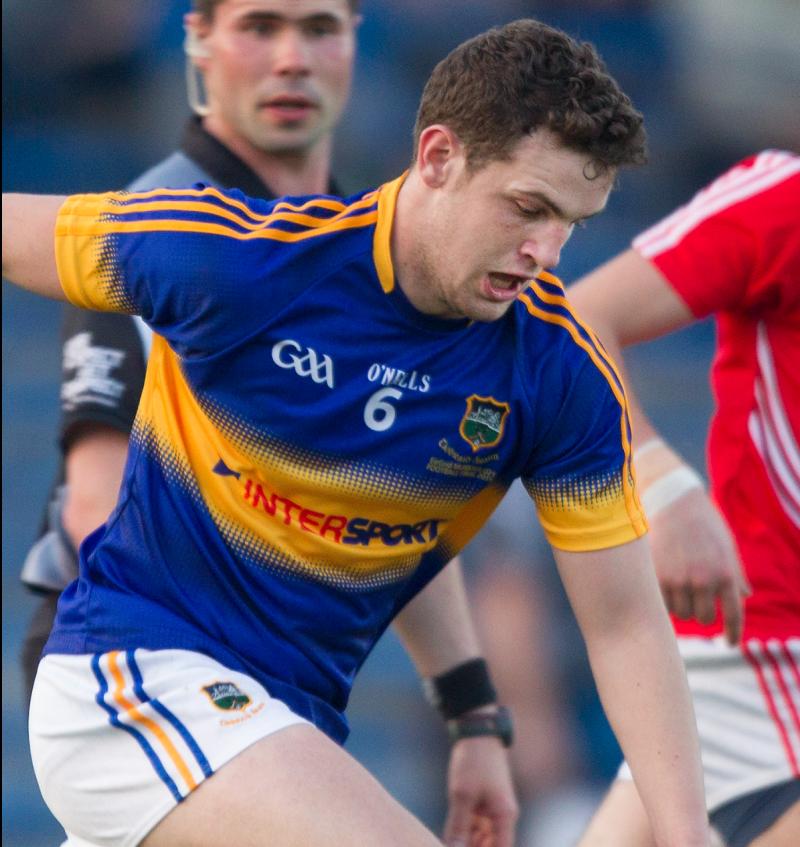 Moyle Rovers' Luke Boland scored a superb individual goal for his side in their 3-9 to 0-9 win over Upperchurch/Drombane at Leahy Park, Cashel.

It may have taken Moyle Rovers a long time to assert their authority in their opening round game of this year’s County Senior Football Championship, but in the end they cruised home for a comfortable victory against Upperchurch/Drombane at Leahy Park, Cashel, on Saturday evening last.

After a very even first half, Rovers went to the break leading by 1-3 to 0-5 as the Mid Tipp side matched them everywhere, but in the second half John Owens’ side found their rhythm and the space to express themselves to outscore their opponents by 2-6 to 0-4 and collect their first brace of league points. It sets them up nicely now for their other group games to come against Aherlow Gaels and Cahir.

The crucial scores in this game were the three goals and the first of those, a superb individual effort by midfielder Luke Boland, was the highlight of the game, coming as it did when his side trailed but also because of its creation and superb execution.

Upperchurch had started the better and were 0-2 to 0-0 ahead after eight minutes following two fine points from Paul and Luke Shanahan. The Monroe side eventually getting their side of the scoreboard moving when Shane Foley pointed after nine minutes.

From that kick-out Danny Owens won possession at midfield and Luke Boland took on the ball and ran down the throat of the Upperchurch defence, playing a 1-2 with full-forward Stephen Quirke before superbly finishing the return pass low to the net to put his side ahead for the first time.

At the first half water break the Rovers were ahead by the minimum at 1-2 to 0-4. After Liam Boland and Paul Shanahan had exchanged frees, Jack Butler rounded off the first quarter when kicking a fine point for Upperchurch after Ailbe O’Donoghue was very involved in the build-up.

Immediately on the resumption after the water break Upperchurch equalised with another Paul Shanahan free won by the work of the impressive Gavin Ryan in drawing the foul. A scoreless 12 minutes of football followed before Liam Boland brought a very poor second quarter to an end with a close-in free and Rovers just about had their noses in front leading 1-3 to 0-5 at half-time.

The second half was to be in sharp contrast to the opening half-hour with Rovers kicking on and emphatically taking charge of the game, thanks in no small measure to the input of Stephen Quirke.

Fifteen seconds after the restart Quirke pointed and then turned provider with a fine lateral pass for Ben Owens to fist-over a point, both scores within a minute of the resumption.

Liam Boland’s third free of the evening in the 39th minute put Rovers four clear and it got even better with the arrival of their second goal eight minutes in.

A move started by Shane Foley around the middle of the field saw Riain Quigley deliver a high ball into the goal area and Stephen Quirke was on hand to use all his height to flick it over Paul Ryan into the Upperchurch/Drombane net.

The roaming Shane Foley then extended that lead to eight with his second point of the evening, making space for himself to shoot over.

Upperchurch, who hadn’t scored in almost half an hour of football, registered their first score of the second half just before the water break when Luke Shanahan converted a close-in free. At the three-quarters mark it was 2-7 to 0-6 for the Powerstown/Lisronagh parishioners with the win very much in the bag already.

Another Liam Boland free won by Diarmuid Foley opened the final quarter before the third of the Rovers goals arrived. Again Stephen Quirke was involved when catching a long delivery and feeding Shane Foley and when Foley was taken down, Liam Boland drove the resultant penalty low into the net for a 3-8 to 0-6 advantage after 56 minutes.

The final few minutes were totally academic, Shane Foley kicking his third from play and Upperchurch tagging on three late points from the Shanahans, Paul (2) and Luke to bring proceedings to an end, the Mid team failing to score from play in the second half, and kicking just three from play over the full hour.

It was far from a classic game but the winners will be happy to get their business done economically and move on. Their defence held up well in the first half when they were tested, but will be examined more on future days. Danny Owens and Luke Boland at midfield put in good shifts while Stephen Quirke and Shane Foley were the pick of the forwards.

It was a disappointing end to the evening for the Mid men who have two big challenges yet to come. Their best on the night were Gavin Ryan, Dean Carew, Jack Butler, Ailbe O’Donoghue up to the time of his injury and the Shanahans.