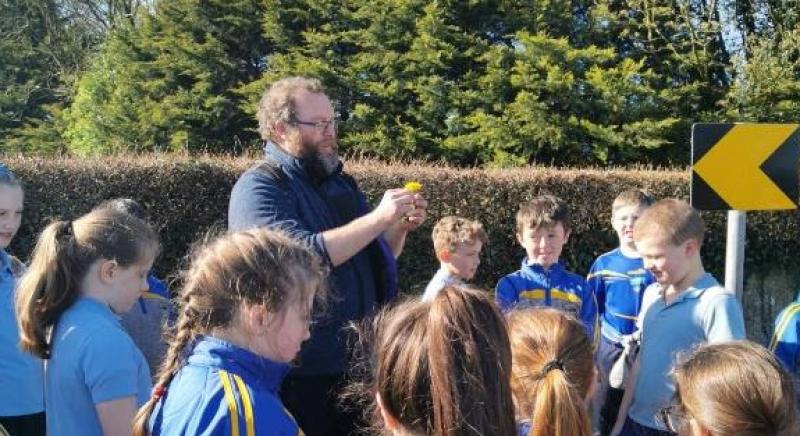 Students from Ballinahinch NS on their habitat survey

The sun was out and the blue sky made the countryside appear even more inviting for discovering nature. I was joining the staff and students from Ballinahinch National School and we were going to spend two days learning about the birds, flowers and insects that live in their school grounds, the village and the surrounding countryside.

Shalle Tidy Towns had kindly sponsored the habitat survey and it was brilliant to see the connection between the school and the tidy towns as both serve their community extremely well.

Both days were dry, but the second day was sunnier and temperatures were warmers and there was more insect life out like butterflies. The school grounds were surveyed by Junior, Senior, First, Second and Third Classes. The school is very privileged in comparison to other schools as they have a few big yards and a hurling pitch.

The star bird in the school was a spring migrant, the blackcap that came all the way from Africa to sing in the trees around Ballinahinch. The male has a beautiful black cap while the female is brown.

Next we explored the hurling pitch and we found a lot of pollinator friendly flowers. These are often called weeds but they contain lots of pollen and nectar that feed hungry bees.

Nettles have an important role for butterflies. The caterpillars of several native butterflies feed on the nettles. When we examined a rolled up nettle leaf we found a caterpillar inside. I encouraged the students to use all their senses and we crushed up the leaves of a conifer tree and its scent is great for clearing your nose.

The students informed me that they also see rabbits coming out from under the gorse bushes dotted on the hills.

The students also found lots of insects and these have six legs and three body parts, a head, thorax and abdomen. We found a ground beetle, spider’s eggs in the corners of the school windows and a large slug.

In the school garden there were lots of woodlice and spiders in the fairy house and beautiful yellow tulips in flower. The second day was spent exploring the slip road opposite the church. The swallows were flying over our heads as we set off. The tidy towns have done tremendous work to encourage biodiversity and have a special wildflower garden for bees, butterflies and bugs.

This habitat is well protected by the Bishops tree that grows nearby. Of the 101 species of bees found in Ireland a third are under threat of extinction. Having wildflowers areas in our communities and schools is a colourful way to help these important insects.

One of the student’s notes mentions the dandelion is good for bees but more importantly it is also known as “wet the bed and makes you pee at night”.

This flower when made into a tea flushes out the kidneys so you do need to pee more.

I loved the way the students started to naturally explore. They looked under stones and brought back all manner of creatures and lots of plants for identification. Woodlice and centipede were found under stones and a large snail who temporarily joined the class before being returned to the wild.

One of the students is going to press the flowers into her copy and I remember doing mine and it started a lifelong interest in nature.

As we explored we heard the song of a willow warbler and chiffchaff and both are spring migrants. We paused for a moment to smell the coconut scented flowers of gorse.

At the motorway bridge the students and teachers have great fun getting the cars to beep as they speed by. Even a passing Garda car was obliging and put on all its lights.

The next part of the road had an amazing diversity of plants. The banks were covered in primroses, Stichwort, meadow sweet, navelwort, wild strawberry, honeysuckle and a new one for me ground ivy. A local farmer told us that the road is covered in bluebells in May.

The shadier parts had opposite leaves, golden saxifrage, lesser celandine, cow parsley flowering currant and blackthorn. The list stretched to over 20 different species indicating an ancient road and bank.

We also caught a solitary bee and a hoverfly that mimics the warning colours of a bee.

Thanks to all the staff and students for all their energy and enthusiasm and Shalle Tidy Towns for sponsoring the walks.