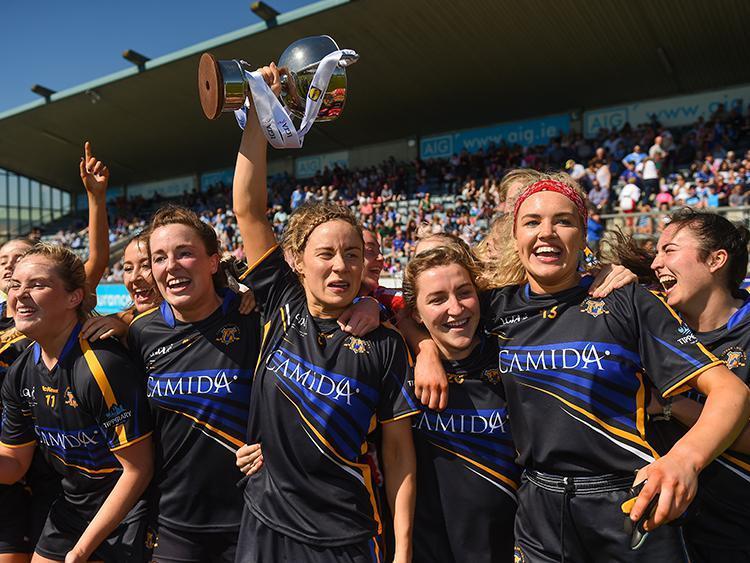 The Premier County beat Cavan in the 2018 division two league final to earn their place at the top table.

Tipperary overcame a distinct wobble and the concession of three penalties to secure their division one status in the Lidl National Ladies Football League thanks to a one-point win over Monaghan at Semple Stadium, Thurles on Sunday afternoon.

The Tipperary side, who are managed by Shane Ronayne, will complete their league programme away to Westmeath (April 6th-7th), but with Monaghan now condemned to make the drop the Premier County are assured of division one football next season which is a terrific achievement for this fast-improving bunch of blue and gold players. And, Tipp are sure to carry a degree of confidence into this summer’s All-Ireland intermediate championship following the experience gained in division one of the league.

Monaghan were highly-motivated for this entertaining contest and will be broken-hearted following a game which saw them spurn a number of goal-scoring including two penalties. As a result of this contest Monaghan were relegated to division two.

Tipperary struggled to play their best football, but the Premier County dug in well and have teenage prodigy Cáitlín Kennedy to thank for punching home the key goal. Aishling Moloney, of course, was outstanding for Tipperary as was Orla O’Dwyer, Ava Fennessy and Anna Rose Kennedy. And, it was highly encouraging to see Tipperary hold their heads when Monaghan came at them in waves.

ONE POINT FROM PLAY

In the opening half, which featured thirty-four frees (seventeen awarded to each side), it is fair to say that Tipperary struggled to play their best football and only managed one point from play.

Meanwhile Monaghan were good value for their 1-6 to 0-8 lead at the interval. With Ciara McAnespie running riot in the full-forward line the Premier County were reasonably fortunate to only concede one goal during the opening half; a brilliant Cora Courtney strike materialised in the ninth minute to force the visitors into a 1-1 to 0-3 lead.

Cora Courtney, Ciara McAnespie, Leanne Maguire (three, two frees) and Rosemary Courtney also got on the scoresheet with points for Monaghan during the opening half, but the real story of the opening period was a succession goal chances which were spurned by the visitors.

In the 32nd Tipperary ‘keeper Lauren Fitzpatrick did especially well to deflect a Rosemary Courtney pile driver over the bar. The home side were also left sighing with relief in the tenth minute when Leanne Maguire blazed wide with the goal at her mercy.

Most glaring of all the Monaghan misses materialised in the sixth minute when Ciara McAnespie and Rosemary Courtney were fouled for penalties; Lauren Fitzpatrick saved the first from the boot of Leanne Maguire and then Muireann Atkinson thundered her shot off the post seconds later.

Tipperary, to their credit, recovered from that early wobble (featuring a sin-binning for Anna Rose Kennedy) and thanks to points from Orla O’Dwyer in the first minute and seven Aishling Moloney frees during the remainder of the opening half the Premier County battled their way into a two-point lead (0-8 to 1-3) with twenty-six minutes played. It was, however, Monaghan who dominated the closing stages of the opening half and landed three successive efforts to carve out a narrow lead.

Aishling Moloney booted over a monster off her right to tie the game during the opening minute of the second half while three minutes later Tipperary pressed the opposition kick-out superbly, full-back Samantha Lambert won the ball and Anna Rose Kennedy kicked the Premier County back into the lead (0-10 to 1-6).

Monaghan created yet another goal chance in the 41st minute, but Lucy Spillane did brilliantly to bravely block Ciara McAnespie’s shot. Seconds later, however, a Leanne Maguire effort re-claimed the lead for the visitors (0-10 to 1-8) and Tipperary looked distinctly uncomfortable.

Cáitlín Kennedy (who appears an extraordinary talent) was re-located to full-forward for the second half and that switch yielded a massive dividend in the 43rd minute when - following great work from Ava Fennessy and Emma Cronin - Cáitlín Kennedy punched home a three-pointer. Róisín Howard added an effort from play soon after and the home side led by three (1-11 to 1-8).

Monaghan responded with two Leanne Maguire frees to close the gap to one, but Tipp were growing in confidence now and Róisín Howard laid off to Sarah Everard for a cracking effort with ten minutes play. Aishling Moloney then added a free and the Premier County enjoyed some breathing room, of sorts.

The sides then traded frees - one of which was a magnificent long-range effort from Aishling Moloney - before a Róisín Daly point with time almost up left four between them. There was still time, however, for a nervous finish after Monaghan won their third penalty of the contest and Leanne Maguire buried the spot kick.

Ardfinnan's Samantha Lambert captains the side this year for the third successive season while Lauren Fitzpatrick (Ballymacarbry, Waterford) has been appointed as the vice-captain. Manager Shane Ronayne (Mourneabbey, Cork) is joined on the management team by Tony Smith (Moyle Rovers), Ed Burke and Sarah Jane Darmody (Ardfinnan) while James O’Leary (Arravale Rovers) takes responsibility for the strength and conditioning of the side. Camida and Tipperary Spring Water are the proud sponsors of the ladies football team.