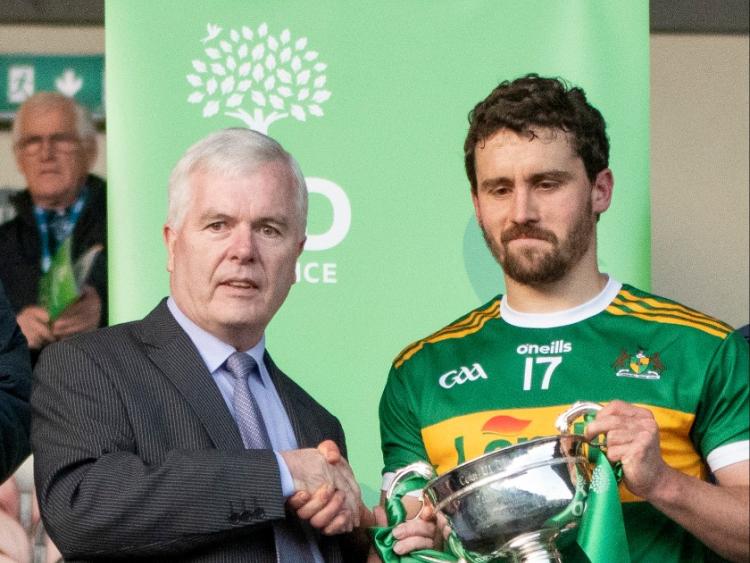 If it had been a boxing match it would have been called off long before the end.
Clonmel Commercials entered Saturday's FBD Insurance County Senior Football Championship Final at Semple Stadium as the raging hot favourites, but few could have anticipated that the game would have followed this course.
The outcome of one of the most one-sided county football finals in living memory had been virtually decided by half-time, when Commercials led JK Brackens by 0-12 to 0-3, having played against a stiff breeze.
And with the Clonmel team's superiority remaining unchallenged on the turnover they turned this final into a procession, as JK Brackens failed to lay a glove on them.
The Mid team came crashing back down to earth with a resounding thud after the excitement of the county senior final success achieved by their hurlers in the Seamus O'Riain Cup Final at the same venue six days previously. The argument could be made that the Brackens would have stood a better chance in a smaller pitch; in the wide open prairies of Semple Stadium, they found themselves mostly chasing shadows cast by the autumn sunshine on a bright but cold afternoon.
Yet the lopsided nature of a final witnessed by an attendance of just over 1,500 shouldn't take away from the Commercials performance, as their slick and well-oiled machine clicked into gear from the start. They never allowed their ranking as the unbackable 1/6 favourites to affect their focus, as they wrapped up their 18th county title, a third in five years and their fourth this decade in businesslike fashion.
Commercials will approach next Sunday's Munster Club semi-final away to either St. Joseph's of Miltown Malbay or Rathgormack in confident mood, following this comfortable victory that followed a hard-fought win defeat of Loughmore/Castleiney in the semi-final.
A 15-points lead meant they were cruising when they scored the first of three second-half goals that embellished the win, Ryan Lambe stroking the ball home in the 45th minute after JK Brackens goalie Niall Bourke had saved his first attempt, after a kickout had gone astray. Defender Jamie Peters injured himself in the process of scoring the second goal six minutes from the end after Jason Lonergan, Michael Quinlivan and Colman Kennedy had combined to carve open the Brackens defence.
The scoreline took on an even worse appearance for the Mid side two minutes later when Michael Murphy collected Jason Lonergan's quickly-taken free and drove a firm, low effort into the bottom corner of the net.

Brackens' misery was compounded when Shane Scully received a black card near the end and, having used all their substitutes, they couldn't replace him and finished with 14 players.
Defender Kevin Fahey scored three points from play and collected the man of the match award for his fine performance. Jamie Peters, who was equally effective on the other wing, must have also been in contention for that award. As Commercials laid down a marker from the word go, Seamus Kennedy and Ross Peters were dominant forces in the first half.
The contributions of Padraic Looram, Jason Lonergan, Michael Quinlivan, Jack Kennedy and Sean O'Connor also enhanced the victory.
The signs were ominous from the early stages, as the Clonmel side built up a healthy advantage on the scoreboard despite playing into the wind. The teams were level in the fourth minute after Colman Kennedy (from a free) and Dean McEnroe had exchanged points. But it all went downhill from there for Brackens.
Commercials seized total control and thanks to scores from Sean O'Connor (0-2), Jason Lonergan, Conal Kennedy, Jack Kennedy (from a free), Seamus Kennedy and Kevin Fahey (0-2) they were ahead by eight points by the 22nd minute.
Captain, Paddy Cadell, Dean McEnroe, Lorcan Egan and Eanna McBride were doing their best to stem the tide and drive JK Brackens forward but they made little or no inroads in the final third of the pitch, where either their final pass let them down or they met stout resistance from Commercials defenders such as Danny Madigan and Cathal McGeever.
Late first-half points from Shane Doyle's 45 and Dean McEnroe provided some cheer for Brackens. But by the midway stage they were well adrift of a Commercials team whose passing, strength and movement simply overwhelmed them. The Clonmel team could easily have ended the first half with three or four goals, their eagerness to play one pass too many near the posts depriving them of the opportunity to raise green flags.
Brackens needed an early second half goal or two to revive their flagging fortunes, but instead it was Commercials who continued where they had left off.
They never removed their foot from the accelerator and within eight minutes another string of points from Kevin Fahey, Michael Quinlivan, Jamie Peters and Quinlivan again presented them with an unassailable lead.
Jack Kennedy's free and a point from play from Colman Kennedy paved the way for the first goal, as Commercials eased their way towards the finishing line.
JK Brackens had to wait 19 minutes for their opening score of the second half, which came from Eanna McBride and was soon followed by a Lorcan Egan point, but by that stage they were only scrambling for consolation scores, as their thoroughly forgettable afternoon drew to close.