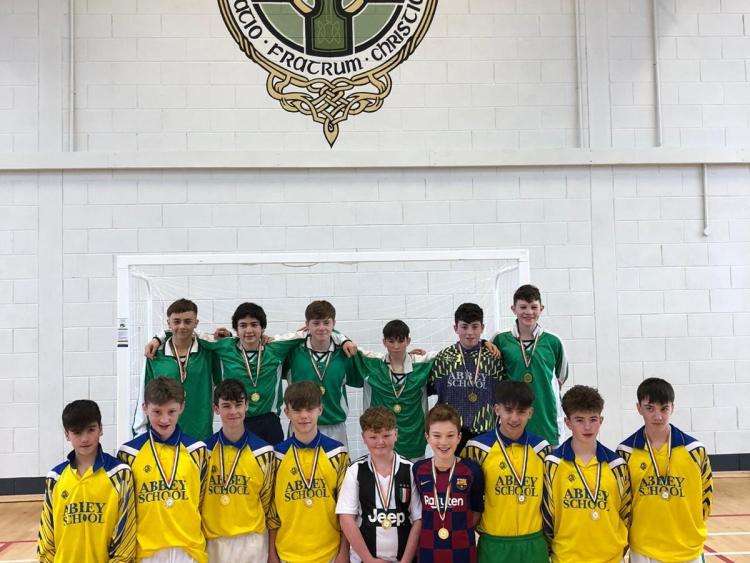 The 2nd Year South Tipp Futsal Blitz was played in the Abbey School recently with 4 teams taking part.
The Abbey School A & B, St. Ailbe’s and Comeragh College all playing off against each other.
The blitz showcased some great games and some very talented footballers who provided great entertainment with some fantastic football.
It proved to have some close games, with the play going from one end to the other as each team tried to gain the upper hand: The woodwork, close misses, brave defending and some fantastic goalkeeping meant each side were in with a chance of reaching the Cup Final.
Throughout the group stage The Abbey “B” team proved to be a tough match by ending the group stage as the only undefeated team out of the four. A fantastic team effort along with outstanding individual skill from Evan Carrie and Michael Gleeson who were on top form as they grabbed some vital goals for their side. However, losing out to Abbey “A” due to a brace from Kevin Stanley in the Semi-Final saw them facing but beating a tough Comeragh College side in the Shield Final. The other Abbey team played some nice football at times but lost all but one of their group games which saw them face the undefeated Abbey “B” in the Semi-Final. A convincing but surprising win saw them face their neighbouring school of St.Ailbe’s in the Cup Final who had beat them earlier in the day 6-1. The hard-fought final went to penalties after regular time finished 1-1. The Abbey’s captain fantastic and goalkeeper Robbie McGrath held his nerve to win the Cup Final. The Abbey School would like to thank all the schools and their teachers who took part and a special thanks to The FAI’s South Tipp Development Officer Stephen Quinn for organising the Blitz.