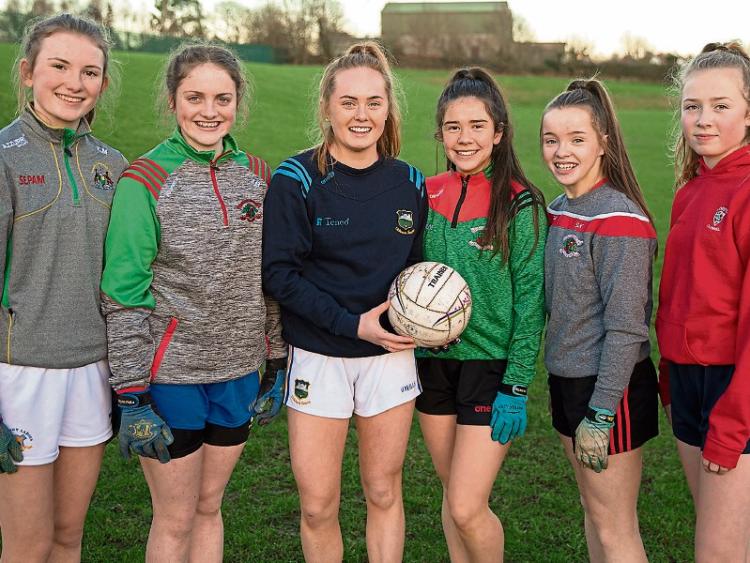 Despite a week of unfavourable weather conditions, Ballygiblin GAA pitch withstood it all to host this enthralling encounter.

Both sides had met in the group stages earlier in the season, with St. Mary’s emerging victorious.

But there was a lot  of football played since then and Loreto Clonmel felt they were up for the challenge.

This Loreto side have experienced finals  before and felt they had the talent and composure to put the game to Midleton.

The game didn’t disappoint and began at a pace that everybody expected.

Loreto were slow to settle and felt the immense pressure of the St. Mary’s full back line.

The Loreto attack was punished with St. Mary’s turning over possession in defence and breaking forward at a ferocious pace. They kicked three well- worked points within the first 15 minutes, all of which had started in their own full back line.

Loreto knew this was going to be a game of patience and taking all scoring opportunities that presented themselves.

As the half continued Loreto began to find their feet, with Keri Tarleton and Kate Moore providing some excellent runs through the Midleton defence.

Eimear Quirke got Loreto’s first point and they began to settle. However, their momentum was dealt a blow when St. Mary’s converted a penalty.

The Loreto defence was working tirelessly at this point, as St. Mary’s were attacking at pace and in numbers. Some excellent defending by Eabha Slattery and Aoife Campion denied certain points.

Loreto got a boost late in the first half when a shot by captain Saoirse Keating dropped into the net under the crossbar, and you could sense that Loreto began to believe they could win this game. They trailed by two points at the break after a first half that saw some great passages of play from Ailis O’ Meara and Nora Martin in defence.

Loreto made some positional changes in the second half and they began the fightback. Clare Walsh began to flourish at wing forward, creating options for Greta Nugent at centre back when going on the attack.

However, a quick St. Mary’s goal in the early stages again dealt a blow to their momentum and they knew they had a mammoth task ahead.

They trailed by seven points in the second half when Eimear Quirke and Keri Tarleton combined in a move that saw Eimear Quirke finish to the net.

Suddenly the gap had closed and Loreto found their second wind. The determination and work rate of both Keri Tarleton and Brid McMaugh began to come to the fore, and they added points to the board, as did Clare Walsh and Triona Ryan.

Missed scoring opportunities caused upset for Loreto and as the game approached the last 15 minutes it looked as if their chances had faded.

The introduction of Ava Ryan at corner forward brought a new lease of life to the Loreto team and she added two points to the board after some fantastic play between Eimear Quirke and Keri Tarleton.

As the game slipped into injury time, and they trailed by two points, it felt as though one lucky break would see them get the goal to secure victory.

But it wasn’t to be as the referee John Murphy blew the final whistle and Loreto’s hopes of retaining the Munster title were banished. The girls did their school, clubs and families proud and worked tirelessly to the bitter end with outstanding performances from Keri Tarleton, Aoife Campion and Ailis O’Meara.

This is a young and talented Loreto side who undoubtedly will be back next year, keen for revenge.