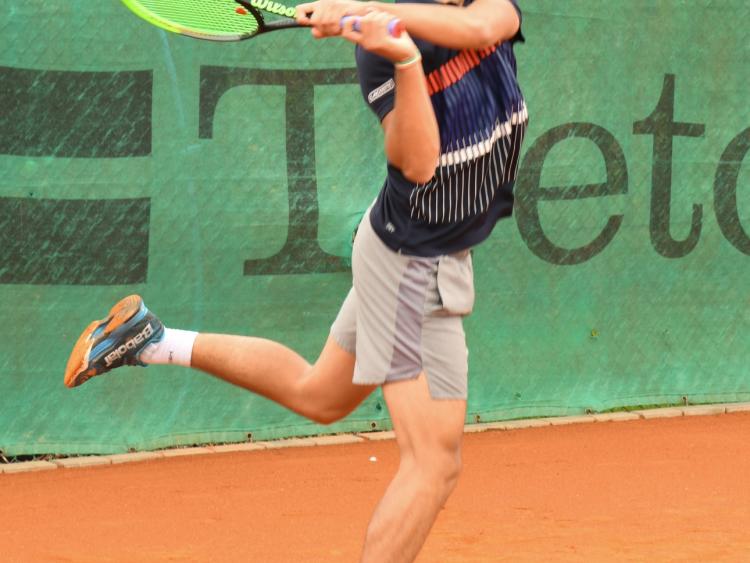 Two of the most promising young tennis stars in the country hail from County Tipperary, although they might as well be from different planets given that one is from Nenagh and the other from Carrick-on-Suir.

Nathan Slattery hails from the north Tipp town while Zach Murphy is a proud Carrick man and they occupy second and first place respectively in the Irish u-16 ranking, with ambitions of following scholarships to the US to the foremost of their thoughts even during this Covid-19 pandemic.

The lads are currently being coached by Mark Finnegan from Kill, County Kildare, at Naas Lawn Tennis Club. A former national junior tennis champion himself, Mark later went on to an American scholarship at University of Memphis. Since finishing his college education in the United States, he has amassed 15 years of college athletic experience as well as over 10 years of coaching college tennis. He has also coached a number of players who are now playing on tour as professionals.
Mark is now back in Ireland with his own business ‘All Sports Recruitment’ and has taken the two Tipperary hopefuls under his wing, coaching but also mentoring both teenagers in the recruitment process for American scholarships.

In pursuing their ambitions the Zach and Nathan face many challenges not least the fact that County Tipperary has no indoor tennis courts which make long commutes part and parcel of the demanding workload for the talented young tennis players in combining study and sport.

There are plans to house a national centre of excellence in Thurles, based at the LIT Sportshub, but for now, this is a pipedream and it will be a while yet before anyone gets to hit a ball on a court there.
Both boys are still at school. Zach Murphy will head into 4th year in September while Nathan will be going into the Irish equivalent of fifth year through an online American High School.

“Looking ahead, it’s very exciting to think I will hopefully be able to combine a top-class education in an American university, with the help of Mark Finnegan, and playing tennis full-time. Following on from my two years in a tennis academy in Spain, I’ve seen the hard work that needs to go into making a career in tennis. It’s hard, very hard, but I’m excited to be getting the opportunity so many dream of, but so few get the chance of, especially from Ireland, and more especially from Tipperary,” Nathan told The Tipperary Star this week.

While travelling to Kildare for training is a bit of a slog, Nathan has faced even bigger challenges as he explains.
“It is rough enough having to go to Kildare where I do my high performance training, but before I went to Spain it was even worse. I was travelling from Nenagh to Castlebar three times a week to train on indoor courts as Munster has no indoor courts. I left school early, traveled for over 2 hours in the car before training even started. It is not easy doing homework in the car I can tell you.

“Then when Galway got their indoor courts, I was also able to train there. It was always a juggling act between school, car, fitness and tennis. Then home late and bed. And then next day same thing all over again. If I’m lucky I may not have to also cut the lawn,” he says.

Nathan and Zach are occupying those top spots in the u-16 ranking and though he acknowledges the fact that Tipperary would be more regarded as a hurling county, Nathan opines that it is perhaps no surprise than Premier County athletes can make it in other sports as well. From athletics to golf, to soccer, swimming, horse racing, badminton, boxing and many other sports, there are Tipperary people excelling in their chosen fields and keeping the blue and gold flag flying.

“It’s crazy that even though tennis is more Leinster focused overall, that the top two playing in Ireland under 16 are Zach and I, both from Tipperary. Tipperary is known for hurling, so maybe it’s no surprise that two Tipp men can do so well at another small ball game. Whether the facilities are great or not, the love of the sport drives both of us on – that’s why I left my family and lived in Spain for two years in an academy. I’m sure Zach has made sacrifices as well,” Nathan says.

Both Nathan and Zach are itching to get back on the courts again - June 29 is their D-day. They, like the rest of the country have endured a difficult period during the Covid-19 lockdown restrictions with their training programmes having been severely disrupted. But, they are determined to come back fighting hard again and in some ways they will perhaps be fresher and ready for the challenges which will undoubtedly come their way - having overcome many obstacles already to get to the level they are at, what's a little global pandemic.

“It is great that Nathan and I get the opportunity to spar with each other in Naas Lawn Tennis Club. I’m very excited to be starting this journey. My goal is to play and compete in the sport that I love while pursuing an education. Being part of a team is something that I’ve always wanted growing up. I am also excited to meet new people and play against a range of players,” said Zach this week.

We wish the two Tipp boys well in their journey to the top of the tennis world. Perhaps one day we will get to see them play at Winbledon, Roland Garros or the US or Australian Opens - how cool would that be.