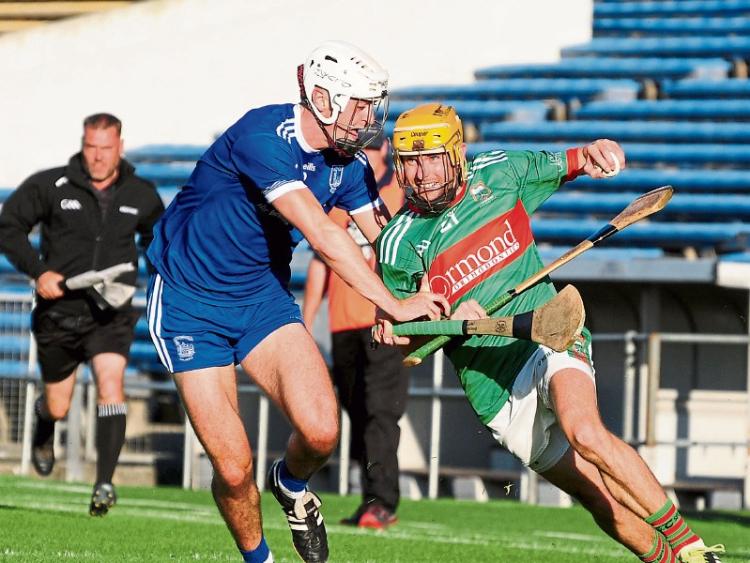 Evan Sweeney (right), seen here in action against Thurles Sarsfields' Cathal Moloney, has been in great form for Loughmore/Castleiney this season

The business end of the hurling championship has thrown up intriguing quarter-finals. Amazingly two of the pairings are repeats from last year’s quarter-finals: Kiladangan/Toomevara and Borris-Ileigh/Drom.

A third – Clonoulty/Loughmore – is a repeat of a preliminary quarter-final from 2019 while the remaining tie – Sarsfields/Nenagh – has no shortage of past history either.

That level of familiarity, plus the knockout element, should add real spice to these fixtures. The newest restrictions mean empty terraces so streaming is the obvious go-to option for followers all over the county. It’s not ideal but it’s the best available in the circumstances.

Where to begin? Well, the Clonoulty/Loughmore tie has a special resonance because their meeting last year was arguably the most exciting game of that championship. It was one of those clashes that had everything that stimulates the nerve endings of hurling followers.

You had a storming start by Loughmore, a controversial sending-off and a great fight back by Clonoulty, who eventually prevailed in extra time.

For the West side it was their game of the year but coming after a marathon divisional final with Eire Og the tank was empty when they met Kilruane in the quarter-final proper and there ended their season.

Clonoulty won’t need reminding that Evan Sweeney found their net twice in the early stages of last year’s game at Littleton. He did the same to Kilruane a fortnight ago so there’s an immediate point of reference for their defence.

That Clonoulty defence will be hoping to have the O’Keeffe brothers back on duty after nursing injuries in recent weeks, Joey with a thigh problem and John with a damaged rib.

They’ll also have the threat of John McGrath to contend with so they could face a testing examination. Mind you they have an added security policy in goalie Declan O’Dwyer, the iceman of the team.

Elsewhere Clonoulty will look to a strong midfield partnership of Michael Ryan and Conor Hammersley, as well as significant attacking options through players like Dillon Quirke, Cathal Bourke, Timmy Hammersley and Thomas Butler, the latter having his finest season for several years.

As ever Noel McGrath’s impact will be crucial to Loughmore; he was incredibly subdued against Sarsfields but back to more familiar form the last day against Kilruane. John Meagher is a big player too for the Mid side in defence, as is Brian McGrath.

It all adds up to an intriguing contest. The bookies have Loughmore just ahead as marginal favourites but in truth this is a classic 50/50 encounter, with everything reliant on form and fate on the day.

The bookies are showing no such tightness in their calculations for the Sarsfields/Nenagh tie. Sars’ are unbackable at 4/11 with Eire Og available on odds of 5/2. I’ll be surprised if there’s that gulf between the teams, though on known form you’d have to fancy the Blues to advance.

These sides are no strangers. Their last major meeting was the 2018 semi-final when the Northerners pulled off a famous win, albeit against a Sarsfields side that at that stage was slipping into a trough from which they are only now emerging.

The return this year of Billy McCarthy and Mikey Cahill from injury has been a major fillip, as has the form shown by some of the newer guys such as David Corbett, Cathal Moloney and Conor Lanigan.

However Billy McCarthy took a blow to the knee against Moycarkey in their final group game and his cruciate has definitely gone again. It’s a disaster for the player. After what he’s been through it’s the cruelest of fates to be again laid low by injury.

Nenagh Eire Og must be the most frustrating team to follow. In the last seven seasons alone they’ve lost three county finals – two of them by a single point.

Two years ago they seemed well set up after ousting Sarsfields in the semi-final but then couldn’t handle Clonoulty in the final. When they’re fancied they’re at their most vulnerable, so I expect a big game from them at the weekend when least expected.

They’ll certainly need better performances from the likes of the Heffernans and Paddy Murphy in attack, where at times the last day Jake Morris seemed to be operating alone. Barry Heffernan has been struggling with injury but his return would be a major boost to their prospects. 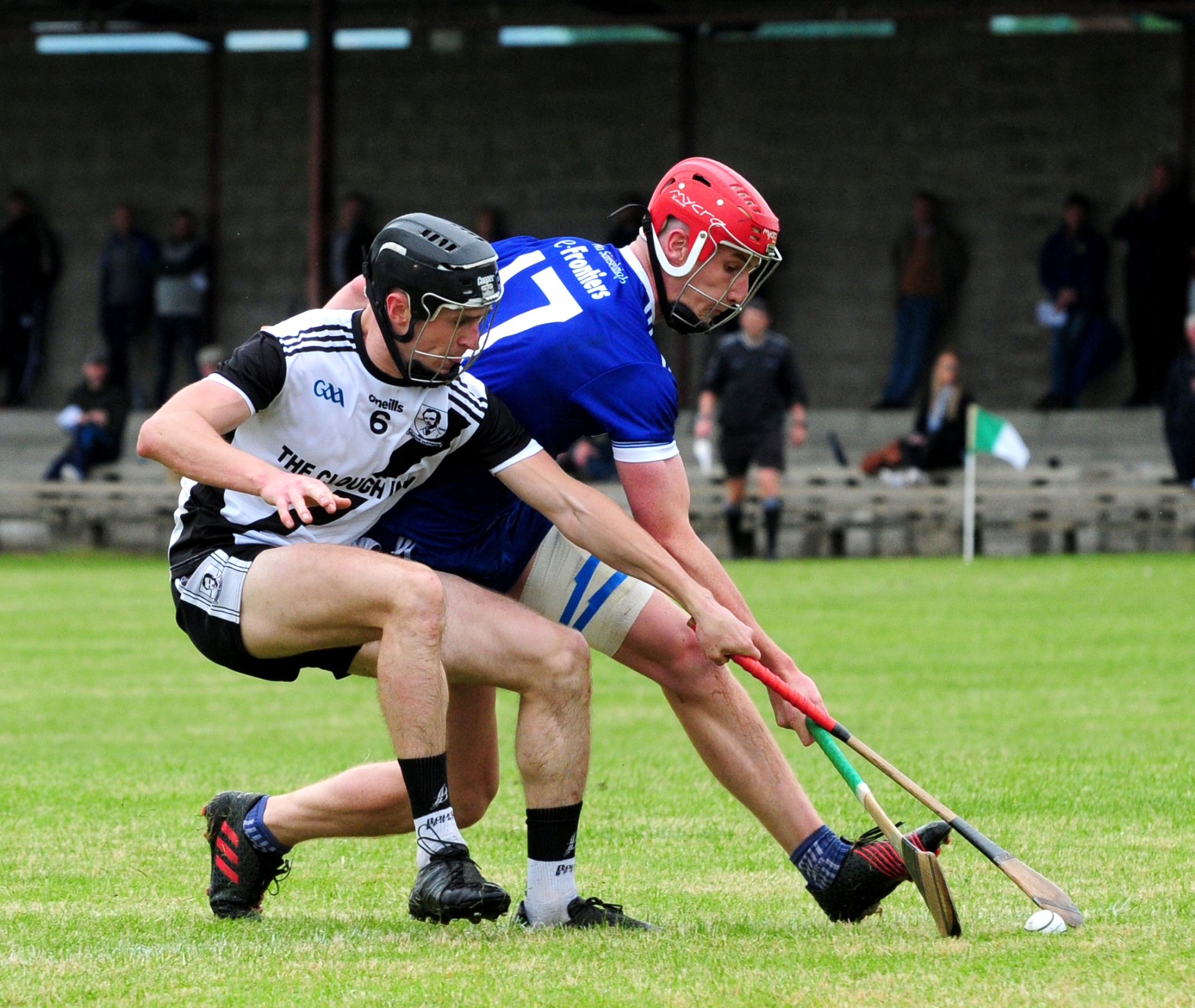 Thurles Sarsfields have been rocked by the news that Billy McCarthy (above, right) faces another long injury layoff

The betting odds for the all-North affair between Kiladangan and Toomevara are likewise one-sided. You’ll only get 1/3 odds on the Puckane club while the Greyhounds are available at 5/2.

Perhaps Kiladangan’s smart form against Drom in their final group game is weighing heavily in that estimation, especially their goal-getting capacity through  Paul Flynn, Billy Seymour and Dan O’Meara. If they were judged on their drawn game against Brackens the odds might not be so complimentary.

Toomevara have been steady if unspectacular in their season so far. Their draw with Borris-Ileigh was noteworthy - their sharing of the points with Upperchurch less so. They’ve a decent team, though whether it’s strong enough to be in the shake-up for county honours is questionable.

After last year’s narrow final defeat to Borris-Ileigh, Kiladangan are on a mission to push on from the promise shown twelve months ago. They’ve been a coming force and a defeat here would be a major setback. I don’t expect it to happen.

The final game has neighbours children at play when Borris-Ileigh put everything on the line against Drom/Inch. Their last major encounter was in the 2019 quarter-final.

The game was played at Holycross, where Borris seemed in control but were then very nearly caught at the end. Two points was the final margin but events since that day have seen the gap widen, with Borris going on to win both county and province.

Interestingly Borris-Ileigh clawed their way through the final stages of last year’s championship with a series of narrow wins – three to spare on Kiladangan in the final, one better than Kilruane in the semi, two ahead of Drom in the quarter, even beaten by Moycarkey in their final group match, though there was nothing at stake there.

Yet their progress outside the county showed a new level of performance that made them our best county champions for many years.

All of which makes it surprising then when you look at the overall betting and see that Borris are only rated third to win the title behind Sarsfields and Kildangan.

Perhaps doing a follow-up is seen as particularly difficult or maybe injuries are rated as significant; Paddy Stapleton’s absence from the starting team has been a particular loss. Either way I’d expect their mission to retain the title will survive at the weekend against a Drom side that was well outplayed the last day by Kiladangan.

The county secretary mentioned last week the possibility of two double headers for these games, but the tightening of restrictions seems to have scuppered that prospect so the matches are now stand-alone items on Saturday and Sunday.

The introduction of the closed-door policy by the Government, on the advice of NPHET, has brought a sharp response from many quarters, though I sense a certain rowing back by GAA spokespersons since the initial reaction.

That softening of the line is welcome too. Asking for the evidence behind the Government decision was very reasonable but some of the language used in some quarters was a bit heavy-handed.

The annoyance was understandable but it’s never wise to adopt a self-righteous approach. Some of the commentary in the Sunday papers, for example, did the cause no favours either.

Indeed midweek I was surprised by a Martin Breheny piece in the Indo. The gist of the article was that the new restrictions imposed by the Government represented an attack by the Dublin establishment on rural Ireland.

I really cringe at this conspiracy stuff, which for me smacks of populism. Have a right go at that crowd up in Dublin and the culchies will applaud you to the rafters.

There are some uncomfortable truths that need to be faced here. Our county board has done an excellent job - and indeed Semple Stadium has been exemplary in its enforcement of protocols - but elsewhere the picture is not so complimentary.

For example the attendance at the Holycross/Clonoulty game a fortnight ago was way beyond the 200 mark – and I’m talking multiples of that figure. Nor was social distancing conspicuous and in that regard we all have to raise our hands.

This isn’t a criticism of the venue or gate checkers. It’s simply an acknowledgment that it is virtually impossible to properly police rural venues, where access is so easy from so many different approaches.

Training routines at club venues are also problematic, where there’s effectively no policing of numbers and several teams may be involved as well as onlookers. All of this is awkward territory for the GAA, especially when people rage against the Government and NPHET.

The harsh reality is that an element of complacency has set in, with people inclined to play loose with many of the regulations. This is happening at a time when case numbers of the disease are increasing. Some introspection might be more appropriate here than raging against the machine.