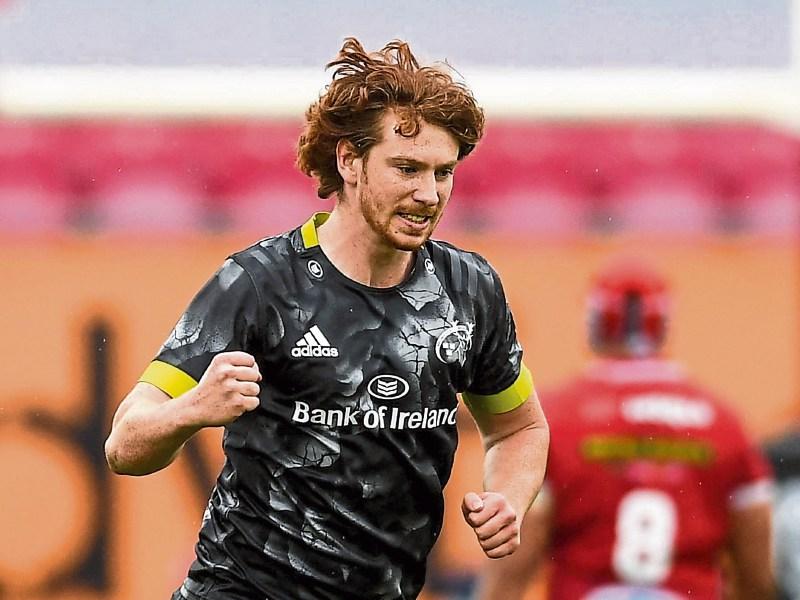 Ben Healy was in top form again when Munster made it three wins from three in the Guinness Pro14 Conference B rugby league by securing a thrilling bonus-point victory over Cardiff Blues at Thomond Park on Monday night.

The Nenagh player kicked four conversions and a penalty, as Munster knocked their opponents off the top of the table.

Healy was one of three Academy players to make appearances – John Hodnett also started while prop Josh Wycherley made his Munster debut as a replacement.

The statistics revealed that the Nenagh player gained 26 metres during the course of the game and made seven carries, 14 passes and one tackle, before being replaced by JJ Hanrahan in the 65th minute.

Ben Healy had already secured a dramatic 30-27 victory for 14-man Munster over Scarlets on the opening day of the Guinness Pro14 League at the Parc y Scarlets in Llanelli, Wales at the beginning of this month.

After he was introduced as a 52nd minute replacement, he kicked an excellent 50-metre penalty to win the game in the final play after an outstanding final 12 minutes that saw Chris Farrell and Kevin O’Byrne score tries, with Healy landing both conversions as well.

He kicked six penalties in another great performance when Munster beat Edinburgh 25-23 in their second game, on a day when he started alongside another Tipperary player, Tommy O’Donnell.

The Cahir player was replaced after 31 minutes when he failed a HIA (head injury assessment).