Mid team have five points to spare over Ardfinnan 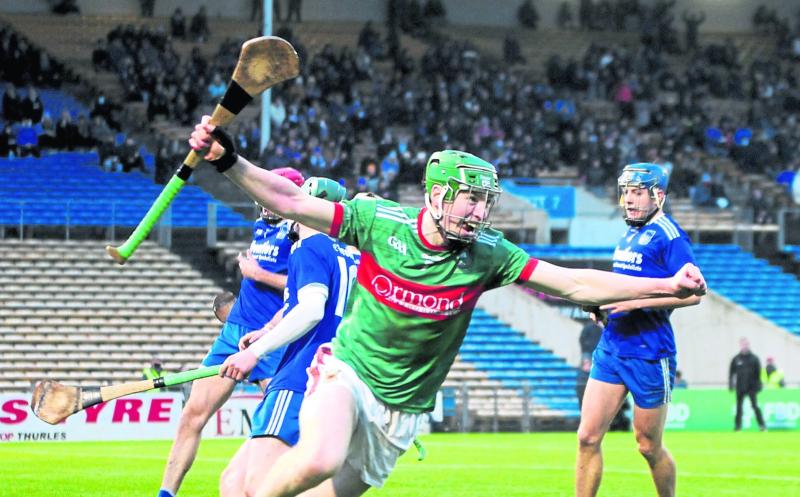 Despite a slow start, champions Loughmore Castleiney were comfortable winners over Ardfinnanan in the opening round of group three in the FBD Insurance county senior football championship at Leahy Park Cashel on Saturday evening.
Ardfinnan have always given Loughmore trouble and they did so again with a purposeful opening quarter that saw them stretch 0-5 to 0-1 clear of the champions.
It was not that Ardfinnnan were dominating their rivals – rather was it that their more direct approach.
Long balls out of the defence were proving very profitable as Gavin Whelan, Robert Condon, Michael Barlow, Billy Hewitt and James O’Mahoney were on target, to which Liam McGrath responded for Loughmore.
The champions never lost their composure and gradually their slower, more measured approach began to pay dividends. They finished the first half with a flourish as points by Brian McGrath, Noel McGrath and Conor Ryan (two) brought them level (0-5 each) at half-time.
It must have been frustrating for Ardfinnan that their excellent first half work was not better rewarded and Loughmore were certainly the happier side going in for the break.
The second half saw a different picture emerge, as the mid men got a firm grip on the game, steadily edging clear of their rivals, although they could never relax as Ardfinnan never relented in their pursuit of a match-winning goal.
After Conor Ryan for Loughmore and Billy Hewitt for Ardfinnan swapped points early in the second half, Loughmore set for home with a brace from Brian McGrath and Conor McGrath and a two-points advantage after 10 minutes.
James O’Mahoney kept Ardfinnan in the hunt but the closing twelve minutes saw Loughmore grind out the victory, Eamon Connolly, Conor Ryan (two) and Brian McGrath firing over points to which Ardfinnan could not muster a reply.

Loughmore Castleiney’s injury and absentee list has been well-documented and given the situation, with so many unavailable, they will be very happy to have cleared this difficult hurdle, and are well-placed to qualify for the knock-out stages from the group.
Next up is a clash with mid rivals Moycarkey Borris, with Aherlow Gaels also to be faced in the final round. The defence of the county title is well on course and should gain momentum when the full squad is fit again.
This was not an occasion when reputations were enhanced. With John Meagher, Lorcan Egan, Brian McGrath, Noel McGrath and Conor Ryan leading the way, Loughmore showed just why are so difficult to master. It looks like they will be the team to beat in both hurling and football again this year.
While defeat was their lot, Ardfinnan can take a lot of positives from this outing.
Tom McGlinchey’s charges were impressive early on but faltered after the break and were losing ground quickly in the last quarter, as Loughmore shot four unanswered points.
It is certainly within Ardfinnan’s ability to come through the group to the knockout stages but there is no room for error now, and their clash with Aherlow Gaels is a must-win game for both sides.
Jonathan Ryan was a commanding figure at full back with Colm O’ Shaughnessy, Gerry Cronin, Robert Condon, Billy Hewitt and James O’Mahoney also working hard for the Ardfinnan cause.
Loughmore Castleiney: Shane Hennessy; Joey Hennessy, Willie Eviston, Lorcan Egan; John Ryan, John Meagher, Tommy Maher; Eamon Connolly (0-1), Sean O’Connell; Liam McGrath (0-1), Brian McGrath (0-3), Noel McGrath (0-1); Conor Ryan (0-5, 2 frees), Tomás McGrath, Conor McGrath (0-1).
Sub: Cian Hennessy for L McGrath (51 mins).
Ardfinnan: Michael Goonan; Jack O’Neill, Jonathan Ryan, Robert Condon (0-1); Mike Hogan, Sean Nagle, Colm O’ Shaughnessy; Gerry Cronin, Gavin Whelan (0-1); Luke O’ Brien, Billy Hewitt( 0-2,1 free), Colin O’Gorman; James O’Mahoney (0-2), Michael Barlow (0-1), Jason Coffey.
Subs: Andrew Heffernan for O’Mahoney (53 mins), Sean Cunningham for Galvin (56 mins).
Referee: Paddy Russell, Emly.