Unfurling the green at Cabragh Wetlands 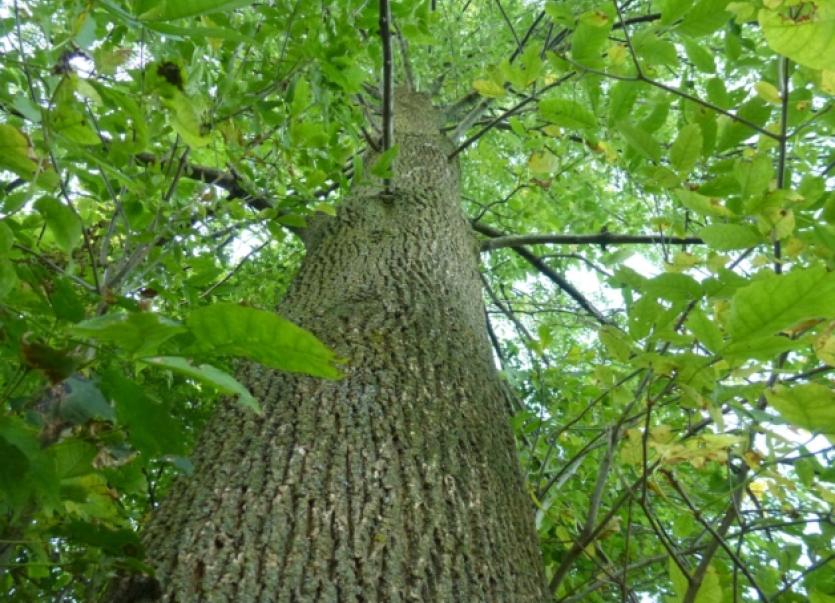 Gaelscoil Bhríde abounds with young oak trees and so it should as this tree has been associated with St. Bríd since early Christian times.

“I’ve been waiting, such a long time,” not for an assignation under Clery’s clock or above or below in Thurles but at “geata na scoile” in Bohernanave.

Each morning there has been frost on the ground and I wonder will the day ever come when the king of the woodland unveils his clothing for the year.

Gaelscoil Bhríde abounds with young oak trees and so it should as this tree has been associated with St. Bríd since early Christian times. Her original convent was Cill Dara, the church of the oak tree and her influence spread throughout the country incuding here to the monastery in Thurles of which Reiligbreeda alone remains.

Indeed, one of the earliest forms of an Irish Christian church was a “dair-theach”, an oak house, whose carpentry features were then transferred to the single cell stone form of the building. Oak was everywhere in the Irish landscape at the time as witnessed by the innumerable placenames such as Derryhogan, Derrvilla, Ballinderry etc.

The discovery of an oak corduroy road leading to a weir of the now forgotten monastery on the banks of the Suir near Cabragh is another example of the prevalence of oak in the landscape of the time .

Gaelscoil Bhride holds in its vestibule a stunning piece of modern Irish art designed by an Offaly craftsman of a spreading oak tree under whose branches learning in all its forms takes place.

As they walked in dribs and drabs in the eerie light of a wet dawn, many participnts in the “darkness into light “ project, remembering lost ones and the parents and families who are left behind, would have witnessed in the soft rain the unfolding of the buds on their way towards the Jimmy Doyle Bridge. The morning did not produce a glorious sunrise of hope this year but the emerging leaves in their own silent way accompanied by a noisy dawn chorus gave hope and encouragement. These ingredients too were part and parcel of the coffee and croissants at Naomi’s in a generous and thoughtful gesture as part of the fundraising for Pieta House.

Why then was I so concerned with the opening of the buds? In woodlands and gardens, our resident birds are dependent on a plentiful supply of caterpillars and other insect larvae for feeding their young. Whereas the adults have a varied diet, their growing chicks need the easily digestible, pre-packaged protein in the form of insect grubs and caterpillars. The timing and abundance of such insect larvae is governed by the leafing of the trees and sets the breeding schedule of all woodland birds.
The leaves of the oak unfurl in May. Caterpillars of certain moths infest these succulent new leaves before they turn bitter-tasting with tannins.The moths, having laid their eggs on the leaf, then use their silk to fold together the sides of the leaf. Hidden from the view of the birds, the caterpillars feed on the inside of the rolled leaf.

As May progresses, millions of these caterpillars munch away at each oak tree, sometimes completely devouring its first green flush of leaves. The trees recover and produce a second flush of leaves.

The breeding schedule of the great tit and other insect eating birds is synchronized to this May “flush” of oak moth caterpillars. During this month, a sharp eyed great tit can snatch 300 of these larvae in a single day-most of them destined for the gaping mouths of its chicks.

Oak trees support a host of other insects including different kinds of moths and butterflies, species of aphids and various bugs and beetles. Together they make up the staple diet for many other insect eating birds and carnivorous insects such as ladybird larvae and spiders. Each tree species, as it comes into leaf, hosts its own intricate food web. All have their own insect armies that march across their leaves.

The dawn chorus is still reaching its crescendo throughout May. Cabragh is a wonderful place to listen since not only do we have an abundance of willow, next to the oak in importance as an insect and caterpillar food source, but we also have the cacophonous staccato sounds of our summer migrants in the reedbed.

Listen carefully for the bird with the stones in its throat- the stonechat.

Perhaps you might consider planting a tree. Next week we will see how that single action can transcend centuries.
Dawn Chorus webinar on the Spring Alive website on Wednesday May 12.-check it out. Slán go fóill.