BREAKING: Tipperary Rose Aisling O'Donovan a huge hit as she appears on RTÉ

Did you tune in to see the Fethard woman at the Rose of Tralee Festival? 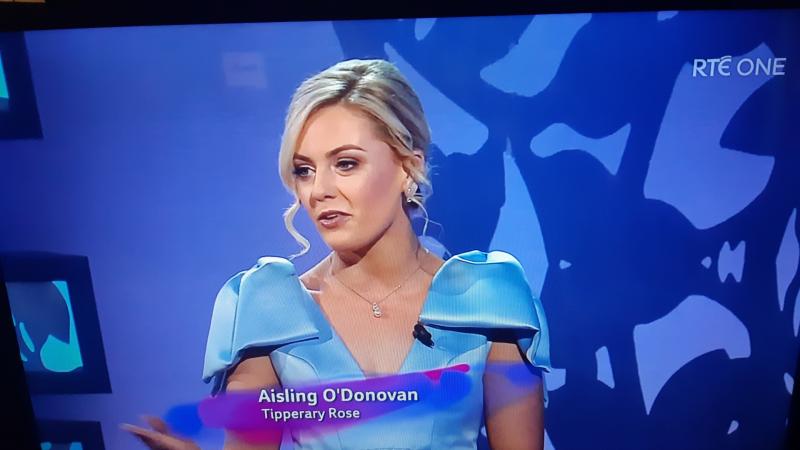 Tipperary Rose Aisling O'Donovan was a huge hit as she appeared on night one of RTÉ's coverage of the Rose of Tralee Festival.

27-year-old Aisling O'Donovan is a secondary school teacher and was the second Rose out on the first night.

Host Dáithí Ó Sé asked Aisling on Monday night about being mistaken for a relative of someone famous.

The Fethard woman was a huge hit with the crowd in Tralee and said at one event she had been wrongly called "Aisling O'Donnell" and one of the Roses christened her a niece of Daniel O'Donnell.

In a hilarious video message, "uncle" Daniel O'Donnell wished Aisling the best of luck and finished with an, "Up Tipp." And added: "I didn't know I had a niece in the Rose of Tralee."

Aisling spoke beautifully and eloquently on the night about her specialised area of positive psychology which Aisling described as looking at how to enjoy life as much as you can.

An exciting and busy build-up to the Rose of Tralee Festival for Tipperary Rose Aisling O’Donovan became even more hectic as she was engaged while on holiday in Italy.

Aisling was on holiday with boyfriend Colm Barry in romantic Venice when the proposal arrived which Aisling described as Colm "getting the wobbly knee" on Monday night.

Aisling and Colm are going out with one another for the last eight years.

The couple live in Cashel and they both work as teachers in Fermoy in separate schools.

BIG INTERVIEW: 'I was very daunted by the idea of speaking on stage,' says Tipperary Rose

After the festival's three-year hiatus due to the pandemic, 33 Roses from Ireland, Britain, the US, Canada, Australia and the Middle East are in the Kingdom for the live shows at Munster Technological University's Kerry Sports Academy.

Aisling O'Donovan has been named Tipperary Rose of Tralee 2022

The RTÉ Rose of Tralee International Festival airs live on RTÉ One and the RTÉ Player from 8pm to 9pm and 9:35pm to 11:35pm on Monday and Tuesday with the winner announced on Tuesday night.