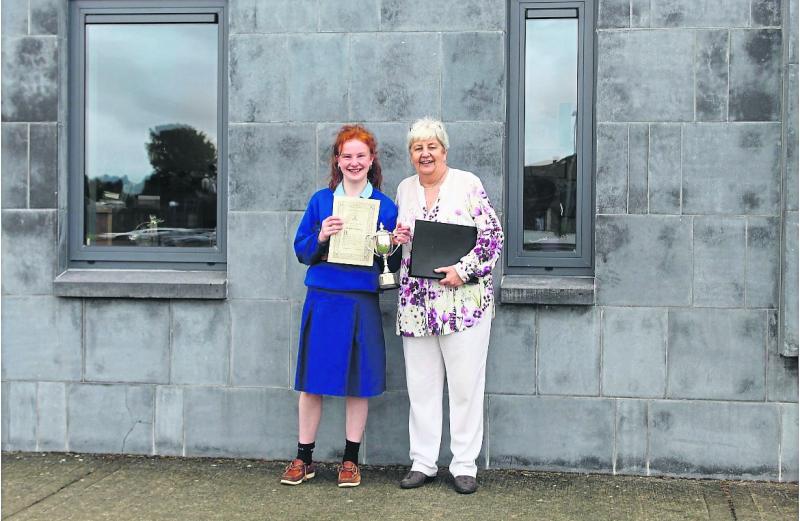 The final Ursuline School assembly of the year took place on Thursday morning, 26 May. It was a chance for the whole School to meet together in the Sr Ursula Memorial Hall for the first time in two years.

The assembly opened with a prayer said by Vice Chairpersons of the School Council, Gráinne Gleeson and Anna Grace. School Council Chairperson, Michelle Flanagan, thanked the Leaving Cert class of 2022 for their commitment and dedication to school life in all its forms and wished her class mates the very best of luck in the Leaving Cert and in life.

Principal Ms Butler thanked the School Council, in particular the sixth year members, for their efforts in creating a pleasant atmosphere in the School and for their long tradition of supporting the ethos of the school.

This year the Ursuline had the distinction of achieving its fourth Amber Flag and ninth Green Flag both of which were presented at the Assembly with addresses from Chairperson of the Green Schools Committee, Natalie Gillman and Chairperson of the Amber Flag Committee, Caoimhe Howley thanking everyone who contributed to these accomplishments on behalf of the Ursuline.

There was also a performance by Chamber Choir of their Cork Choral Festival winning number I’ve Got Rhythm and a selection of Irish tunes played by the TY Trad Group who are through to the Munster Fleadh Cheoil and also won the Gael Linn Podcast competition this year run in conjunction with Radio na Gaeltachta.

Megan Kelly, Fifth Year, who came third in the World Irish Dancing Championships in Belfast recently, danced a hornpipe accompanied by the TY Trad Group. There was also a catwalk fashion show by this year’s Junk Kouture entries including Genevieve Keane who has been selected to represent Ireland at the World Junk Kouture Final in Abu Dhabi.
Awards presented

The final part of the Assembly proceedings was the Awards. Ms Butler pointed out that in her eyes and the eyes of the staff all the students are winners as they are lovely to be with and so gracious in the sharing of their gifts and talents always.
She also said some people are really good at being a friend and even though this may never merit an award it is a wonderful gift to have.

Kate Ryan, member of the Irish U18 Hockey team received the Sports Award. She was presented with this by Hockey coach Ms Eimear Cregan.

The Hyland Trophy for the Music Student of the Year was shared jointly by Anna Grace and Juliana McConnell.

The David Molony Medal for Performance was given to Elizabeth O’Meara and the Dwan Salver for the highest grade achieved in a St Angela’s Academy of Music exam, officiated by the RIAM, was presented to Fifth Year student Patsy Norton by Sr Cecelia.

The Sr Ursula Memorial Medal for an original creative work was won this year by Leaving Cert student Aoife Curran for her oil painting.

Certificates of Attendance were given to Sarah Gorman, Caoimhe Dooley and Natalie Gillman for their full attendance in Secondary School.

The International Student of the Year was Jeanne Pannetier, a French TY student who fully immersed herself in all aspects of Irish School life.

Hannah O’Brien was this year’s recipient of the Ursuline 250 Jubilee Award and the Helen Larkin Fitzgerald Award for Student of the Year was given the Sixth Year Catherine Fogarty for her positive energy, her resilience and for making everyone feel important and included in her own unique and friendly way.

Well done to all students who received awards and to all the Leaving Certs who have left an indelible mark on the School.
They shall be missed.